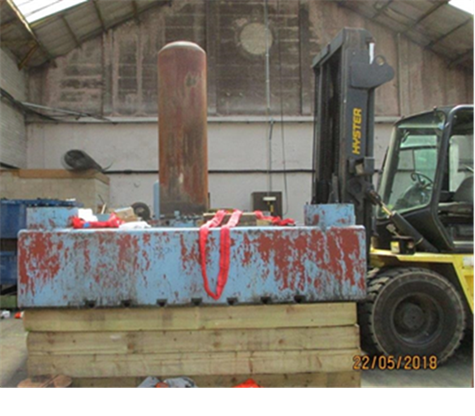 The death of an engineer who was fatally crushed when a 20-tonne piston fell on him would not have happened had an adequate risk assessment been carried out beforehand, the Health and Safety Executive (HSE) inspector who investigated the case has told IOSH magazine.

On 21 May 2018, engineer Colin Willoughby was working on a 1,000-tonne Hugh Smith press for his employer, Graham Engineering Ltd. The company was planning to use the press to potentially fulfil a contract to make MRI scanners, but the machinery needed some remedial work. Colin was removing some welding beneath the press, which had been lifted by two forklift trucks, when the 20-tonne piston worked loose and killed him instantly.

’The press was in three separate sections and Graham Engineering Ltd was in the process of reconditioning the machine before it could become operational. That involved examining the machine in more detail and some work had to be undertaken on it,’ HSE inspector Steven Boyd said.

’The failings that occurred were twofold. This 20-tonne press section – one third of this machine – was lifted in an unsafe way using two forklift trucks that were overloaded. Fortunately, during the lift nothing went calamitously wrong, but there was a clear exposure to serious risk. A lift such as this – using two forklift trucks to lift a heavy piece of equipment – is quite complex so a proper lifting plan should have been undertaken, but it wasn’t.

’Nevertheless, that was done and this section of press was lifted up and some work was undertaken under it on at least two separate occasions. Tragically, on the second occasion, Colin was grinding some weld, but once that was ground away, a large hydraulic piston descended and fatally crushed him.'

Following the HSE investigation, charges were filed against both Graham Engineering Ltd and one of its directors, Stuart Fraser. Mr Fraser was acquitted at a jury trial earlier this year but last month at Preston Crown Court, Graham Engineering Ltd was fined £500,000 and ordered to pay £145,487 costs after being found guilty of breaching the Health and Safety at Work Act.

’Fundamentally, the company didn’t undertake a proper lifting plan for doing the lifting and there wasn’t a suitable and sufficient risk assessment done for any of the work activity on this press. This is a large press, and it is a potentially hazardous piece of machinery,’ Steven said.

‘If you’re working on something you don’t have much experience of, you need to take a step back and say: “What are the hazards we’re dealing with here? What risks do they create? How can we adequately control those risks?” That activity wasn’t done sufficiently. Had it been, then a safe system of work could have been created and followed, and the tragic consequences could have been avoided.

’Fatalities such as this really hammer home the consequences of health and safety management failings. Colin leaves a widow and was a very well liked man; his death has had a devastating effect on the company and its employees. But incidents like this demonstrate how important sensible health and safety measures are in workplace. We’re not talking about red tape here, we’re talking about really serious risks that can have absolutely devastating consequences if they are not adequately controlled.

’The fundamental point is that health and safety risk management should be proportionate to the risks that you are dealing with. If you are dealing with very high-risk activities, then we’d expect an increased level of assessment and time spent to manage those risks. In this case, these weren’t small trivial risks, these were significant risks in a heavy engineering, large workshop environment. That is why the HSE investigated it thoroughly, brought it before Preston Crown Court, and why it resulted in such a large fine.'

Steven says this tragic case brings up a key point that health and safety professionals can learn from.

’If you are doing a non-routine task, something which isn’t part of your regular production activity – for instance, in this case, preparing a large piece of machinery for potential future use – that should be a trigger to think: this is out of the ordinary; this is not necessarily covered by our generic risk assessment; we need to stop, think and undertake a specific task risk assessment and an associated safe system of work to avoid something going wrong.

‘There should also be suitable supervision in place to ensure any safe system of work is followed.’