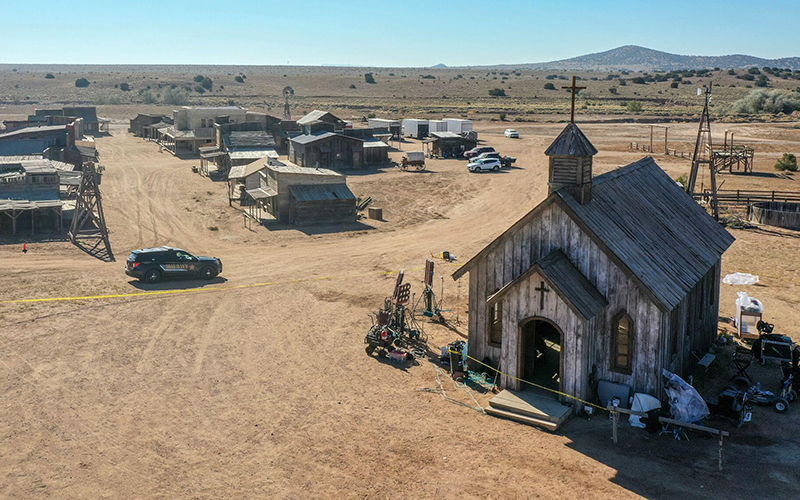 The producers of a film whose cinematographer was accidentally shot dead on set have been fined nearly $137,000 for firearms safety failures.

Halyna Hutchins was killed and director Joel Souza injured during filming last October as actor and producer Alec Baldwin rehearsed with what he believed to be a safe gun.

The actor said he had no idea how a live bullet came to be on the set near Santa Fe, New Mexico.

An investigation into the incident found the company, Rust Movie Productions, knew firearm safety procedures were not being followed on set and demonstrated ‘plain indifference’ to employee safety, the New Mexico environment department said in a statement.

‘What we had, based on our investigators’ findings, was a set of obvious hazards to employees regarding the use of firearms and management’s failure to act upon those obvious hazards,’ Bob Genoway, bureau chief for occupational safety, told the Associated Press.

The safety report confirmed that a large-caliber revolver was handed to Baldwin by an assistant director without consulting with on-set weapons specialists during – or after – the gun was loaded. Regulators noted that the assistant director also acted as safety coordinator and that he was present and witnessed two accidental discharges of rifles on set, and that he and other managers who knew of the misfires took no investigative, corrective or disciplinary action.

'The safety coordinator was present on set and took no direct action to address safety concerns,' the report stated. 'Management was provided with multiple opportunities to take corrective actions and chose not to do so. As a result of these failures, Director Joel Souza and cinematographer Halyna Hutchins were severely injured. Halyna Hutchins succumbed to her injuries.'

New Mexico Environment Department cabinet secretary James Kenney added: 'There were several management failures and more than sufficient evidence to suggest that if standard industry practices were followed, the fatal shooting of Halyna Hutchins and the serious injury to Joel Souza would not have occurred.

'Through our investigation, we determined that Rust Productions' failures were both serious and wilful.

'The bottom line here is that it was the employers' obligation to follow national standards, and that did not happen on the set of Rust,' he added.

'This was a terrible tragedy and our thoughts are with the victim – a mother, a wife, an experienced cinematographer and a well respected member of the film community. Today we continue to extend our thoughts and prayers to her loved ones.

'While I realise no fine can compensate for the loss of life, we are holding Rust Productions fully accountable.'

The company said it disagreed with the findings and would appeal.

In a statement to the Reuters news agency, Rust Movie Productions spokesman Stefan Friedman said: 'While we appreciate OSHA's time and effort in its investigation, we disagree with its findings and plan to appeal. Our thoughts and prayers remain with Halyna's family.'