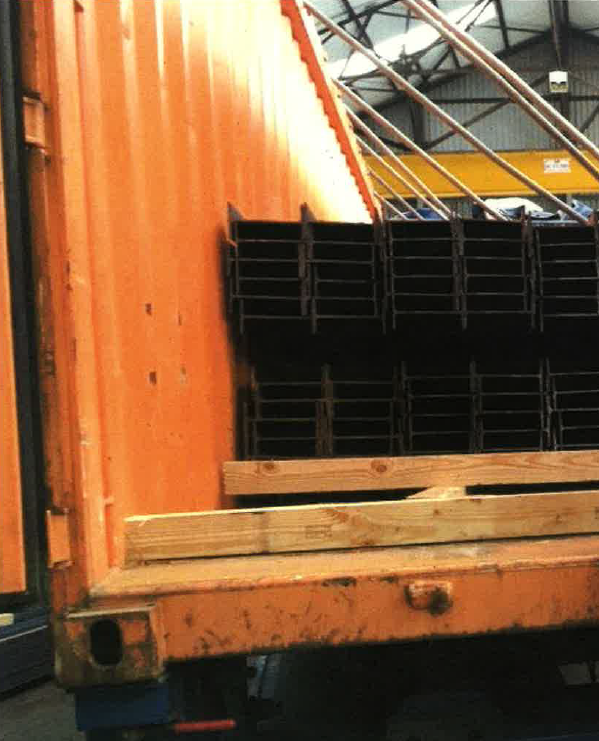 Steel and dunnage in the container – Image courtesy of the HSE

A family-run transport and haulage company founded in Newcastle upon Tyne in the 1930s has been fined £200,000 after a longstanding employee died from injuries sustained in a fatal fall. We spoke to the investigating inspector to find out what went wrong.

Newcastle Magistrates’ Court was told that JR Adams (Newcastle) Limited employee Keith Robson was unloading steel beams from the rear of a transport shipping container on 27 June 2018 when he suddenly fell around 1.5 m. He later died in hospital from his injuries.

A Health and Safety Executive (HSE) investigation found that a number of containers had already been unloaded but Keith was the only person in the container who was working at height when the incident happened.

Bruno Porter, HM Principal Inspector of Health and Safety at the HSE, told IOSH magazine that JR Adams was primarily a transport and haulage company but on this occasion, it had undertaken to off-load steel beams for a client at its Gateshead premises and store the stock there. It was not one of the company’s usual activities.

On the day of the incident, employees were accessing the container – which sat on a flat-bed lorry attached to the back of a large goods road vehicle trailer – using a small set of step ladders.

Due to the length of the steel beams, there was very little room in front of the stock that needed to be offloaded in which to work and that was adjacent to the open edge, so Mr Keith was operating in around four foot of space at the container’s rear. It was not a safe working practice.

‘They could have used a portable gantry which would have protected the whole of the back of the container,’ said Bruno.

‘You open the doors and put a gantry up there with some steps and then you have a safe working platform at the rear of the container from which you can step into it, do what you need to do and safely walk down when you are finished. That is the industry standard control measure, which could have been very easily obtained.’

‘The operation was unsafe not only because Keith and others on previous shipments were operating at the rear of an unprotected edge of a container, but also they were controlling the overhead crane in that operation close to the slung load of steel,’ Bruno explained.

‘You had an open edge and employees would be holding a pendant to control the crane. All safe practices say, “Stay well clear of the load” whereas the way they were doing it, they were almost moving the load passed them as they stood in the rear of the container.’

Although the HSE highlighted the unsafe work at height and the unsafe lifting practices at the court hearing, it is believed that Keith possibly fell or tripped as he was removing dunnage – wooden chocks that are put in place at the loading process to prevent the steel moving around in the container as it is being transported.

Some of the dunnage had already been removed using a forklift to prise it up but some of the material remained in the container, the HSE investigation found.

‘It is believed that he either tripped on that dunnage while moving around in the back of the container or potentially he climbed on top of the steel to do something in relation to the roof of the container’s canopy,’ said Bruno.

‘Then he stumbled or tripped as he got down from the steel into that four foot area at the container’s rear.’

Although the family-run business did have various generic risk assessments and safe working method statements in place to cover its usual work, it did not put in place control methods to prevent or mitigate a fall from the container’s rear, the HSE found. It also failed to carry out a suitable or sufficient risk assessment to ensure this specific work activity was carried out safely.

‘When the comment was made in court that there were risk assessments in other parts of the business, primarily that was for work related to specific clients or specific haulage activities,’ explained Bruno. ‘They didn’t have a record of any risk assessment for unloading this steel.’

He told IOSH magazine that JR Adams did not have any previous convictions and indicated during the inquest proceedings that it intended to plead guilty to any charges that were brought.

In bringing its prosecution, the HSE argued that it was a high culpability charge because ‘they had fallen very far short of where they should have been in terms of a safe working practice’.

District Judge Snow agreed that it was high culpability but with a low likelihood of fatal harm, which started the sentencing range in harm category 3.

‘Given the sad circumstances, the judge used the Whirlpool case, which said that he could go up to the top of the next category. That’s when he set a maximum fine of £450,000,’ said Bruno.

‘He then dealt with the significant mitigating features, which brought it down to £300,000 and then gave the business a third off for the early guilty plea.’