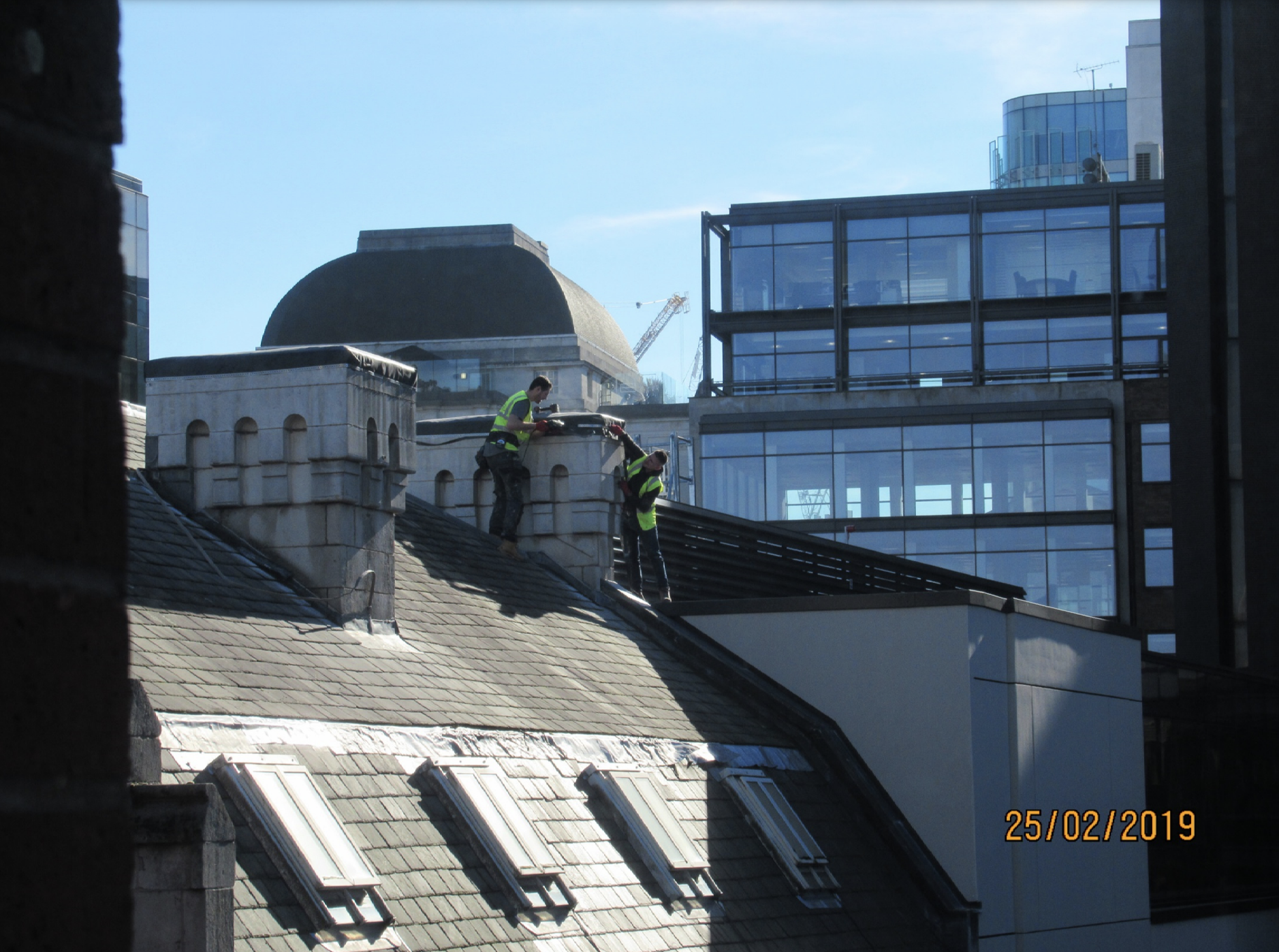 Images courtesy of the HSE

A Salford construction firm has been fined £42,500 and its director handed a community order after Manchester Crown Court found the business had undertaken unsafe work on the roof of the Iraqi Consulate in central Manchester in early 2019.

The Health and Safety Executive (HSE), which brought the prosecution against Exquisite Solutions (Alsager) Limited and its director Ali Wit Wit, said that a supervisor and two workers had been put at significant risk of death or serious injury as there were no safety measures to prevent a fall from the roof edge of the multi-storey building in Norfolk Street.

The safety regulator estimated that the fall from the roof edge to the ground floor was around 16 to 18 m.

The roofing work first came to the HSE’s attention in early January 2019 when a member of the public who was working in a neighbouring building alerted the regulator by email and supplied photos showing that work was underway without any safety measures in place to prevent a fall.

HSE inspector David Norton attended the Iraqi Consulate’s reception the same day but was told that he wouldn’t be able to access the building and its roof to inspect the work. He was informed, however, that nobody was working on site that day. David was given the director’s mobile but was unable to contact him.

On 27 February, a second member of the public who was also working in a neighbouring building contacted the HSE to alert it to the unsafe work and provided further photographic evidence.

David’s HSE colleague attended the consulate’s reception the same day but was unable to access the roof. However, he subsequently spoke to the site’s supervisor outside the building, who confirmed that the work would stop.

As David noted, ‘He was also able to identify the other people who were seen in the photos and that they all worked for Exquisite Solutions’.

The same inspector returned to the consulate’s reception on the following day to make sure that the work had stopped. While in the area, he also interviewed the two individuals who had reported the work at height breaches over the past month.

‘Quite by chance my colleague met Mr Wit Wit, the director,’ David told IOSH magazine. ‘He had attempted to make contact with him the previous day and got the response that he wasn’t in the country. However, he met him on site and had a conversation with the director who confirmed that Exquisite Solutions were in charge of the work.’

The HSE inspector also requested sight of the company’s risk assessments and training records to check that the work was being managed effectively.

Due to the restricted access, however, the HSE was not able to determine the entire scope of the work being undertaken. Even so, and despite some scaffolding on the roof, the regulator concluded that the safety controls were inadequate in light of the risks posed to the three workers identified on-site and that sufficient controls could have included more suitable scaffolding to cover the entire roof.

‘Part of the defence that was submitted was that the people on the roof were contractors, not direct employees’

David told IOSH magazine that the HSE had minimal co-operation from Exquisite Solutions and its director so it was never able to determine exactly how long the work had been going on. However, they concluded from their enquiries that the roofing work had been intermittent over a period of three or four weeks, covering the period from 1 January to 28 February 2019.

Initially the company and director both pleaded not guilty to the original section 2 and section 37 charges, continues David.

‘Part of the defence that was submitted was that the people on the roof were contractors, not direct employees,’ he explains.

‘However, the information we had been given on the initial visits was that they were employees and that’s what the director and supervisor told my colleague. They had hi-vis jackets that had Exquisite Solutions logos on them but because we had no co-operation, we weren’t able to explore that line of enquiry further.’

In response, the HSE laid on additional charges under section 3 of the Health and Safety at Work Act and a similar charge against the company’s director under the same section of the legislation.

At the last pre-trial hearing in December 2021, both the company and director changed their pleas to guilty.

Neither party had any previous convictions.

Company director Ali Wit Wit was also found guilty of breaching section 37 of the HSW Act in relation to the company’s failing of s 2(1) of the same legislation. He must complete the terms of a community order that require him to undertake 270 hours of unpaid work. In addition, he must pay the same amount in costs plus a victim surcharge of £85.

David told IOSH magazine that the roofing work was subsequently completed by another contractor.