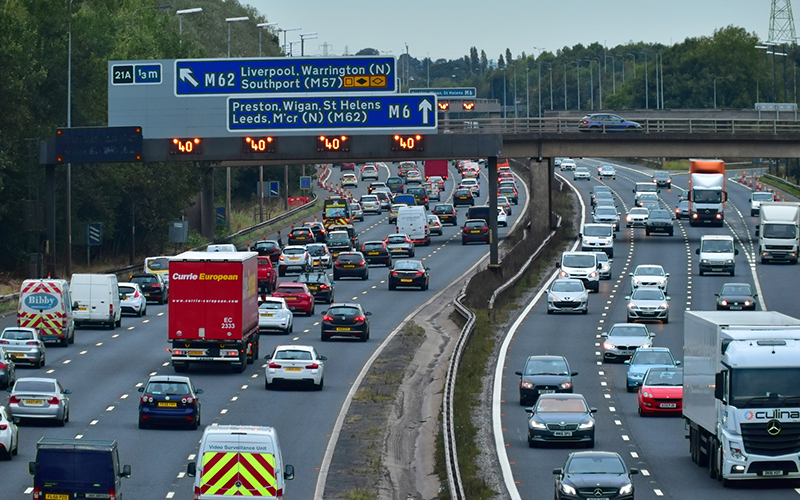 The government will delay the introduction of any more ‘all-lane running’ (ALR) motorways in England while it assesses the safety of smart motorways introduced before 2020.

Announcing the decision last week, the Secretary of State for Transport Grant Shapps said roll out would be paused until five years’ of safety data is available so the government can assess the motorway schemes and decide on the next steps.

ALR motorways are one of the three types of smart motorways that have been in operation on England’s Strategic Road Network since 2014. The other two are controlled motorways and dynamic hard shoulder running motorways, which is where the hard shoulder is open at busy times to ease congestion.

Designed to increase capacity on the network, smart motorways all feature variable speed limits, controlled by speed cameras, to manage traffic flow. Smart motorways also use gantry signs that display a red X if a lane ahead is closed, usually when there has been a vehicle breakdown or a collision.

In the case of ALR smart motorways, the hard shoulder is converted to a permanent ‘live’ running lane, with emergency areas located at intervals. Drivers are supposed to park in these emergency spots if their car experiences difficulties.

The removal of a hard shoulder, however, has attracted criticism from opponents who say it has contributed to road deaths.

In 2020, a BBC Panorama investigation, which submitted a Freedom of Information request to Highways England (now National Highways), found that 38 people had died on ALR motorways between 2014 and 2019.

The Department for Transport’s (DfT) announcement is part of its response to the Transport Committee’s third report on the rollout and safety of smart motorways, published on 2 November 2021, which concluded that the ‘scale of safety measures needed to effectively and reliably mitigate the risks associated with the permanent removal of the hard shoulder on ALR motorways has been underestimated by successive administrations, the DfT and National Highways’.

The committee also said that limited post-opening data was available for many smart motorways, especially ALR motorways. Pointing to an Office of Road and Rail (ORR) report, published in June 2021, which observed that only 29 miles (46.67km) of ALR motorways have five years of safety data available and much less for the remaining 112 miles (180km), MPs recommended that the DfT and National Highways should pause roll out until five years of safety data becomes available.

Taking forward all of the Transport Committee’s recommendations, the DfT has announced a £900m investment to improve safety on existing ALR motorways during the five-year pause, including stopped vehicle detection and concrete central reservation barriers.

However, the government did not agree with the committee’s view that the introduction of ALR smart motorways was an unsafe change to the Strategic Road Network in England and announced that hard shoulders would not be reinstated on existing ALR motorways.

The DfT cited the ORR’s 2021 report which provided an independent assurance of safety data and largely agreed with National Highways’ claim that ALR smart motorways are relatively safer in comparison with other roads in terms of fatalities.

In a move designed to reassure motorists, the government’s latest announcement includes a commitment to ensure that smart motorways without a permanent hard shoulder are equipped with ‘best-in-class technology and resources to make them as safe as possible’.

‘All ALR smart motorway schemes are, and will continue to be, subject to high standards of design, risk assessment and construction, followed by detailed monitoring and evaluation once open to traffic’

This includes investing £390m to install more than 150 additional emergency areas on the existing network so drivers have more places to stop if they get into difficult. The government says this will represent around a 50% increase in stopping places by 2025.

In its response, the DfT has also agreed to take forward the following committee report recommendations:

During 2019, Shapps had asked the DfT to undertake ‘an evidence stocktake to gather the facts on the safety of smart motorways and to make recommendations’.

This request culminated in the publication of an 18-point Stocktake and Action Plan in March 2020 that included adding emergency areas and upgrading cameras to detect red X offences. Drivers who ignore ‘red x’ signs now risk £100 fines and three penalty points on their licence.

The action plan also emphasised the need to focus on ‘upgrading the safety of ALR smart motorways rather than reinstating the hard shoulder’, a decision that has attracted criticism from some campaigners.

While further data is being collected, National Highways will complete smart motorway schemes that are currently in construction, which the DfT says will all open with technology in place to detect stopped vehicles.

These are all more than 50% complete, so halting completion would cause significant disruption for drivers, it adds.

National Highways will also pause the conversion of dynamic hard shoulder motorways into ALR motorways while it investigates alternative ways of operating them to the benefit of drivers. It plans to install technology to detect stopped vehicles on these sections.

‘All ALR smart motorway schemes are, and will continue to be, subject to high standards of design, risk assessment and construction, followed by detailed monitoring and evaluation once open to traffic,’ the DfT said.