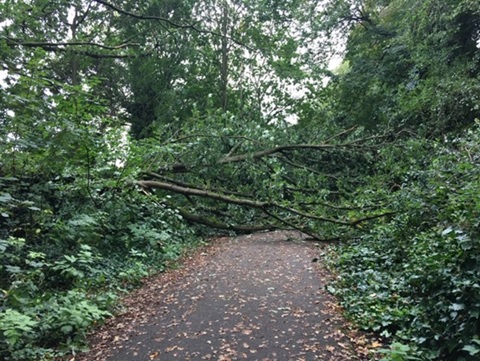 Staffordshire County Council has been fined £300,000 after pleading guilty to failing to inspect and maintain trees on a public footpath, leading to the death of a member of the public.

On 3 October 2019, 58-year-old Neville Scattergood was walking his dog on the Isabel Trail, a popular local route off of Eccleshall Road in Stafford. Neville was hit by a falling oak bough and suffered a fatal cardiac arrest.

The tree should have been inspected under Staffordshire County Council's own safety measures, but the court at North Staffordshire Justice Centre heard that an 'administrative mistake' meant it had been left off the authority's inspection list for more than a decade.

Local authorities are legally required to suitably and sufficiently manage the risks and hazards posed by the trees within their responsibility remit. Staffordshire County Council had a programme of proactive inspection and maintenance but the Isabel Trail had been omitted for many years. This meant that damage to the oak was not spotted by inspectors, despite at least 20 complaints from locals about dangerous trees along the route.

The court heard that, had the damage to the tree been spotted, a simple pruning would have prevented it from falling. An investigation by the Health and Safety Executive (HSE) found that the tree – a multi-stemmed mature hybrid oak, approximately 12-14 metres high and with a crown radius of between seven and 10 metres – had defects from which it was foreseeable that it was likely to fall and cause injury.

'Local Authorities need to ensure ... they have enough suitably trained and competent tree inspectors to enable compliance with their tree management policies and codes of practice'

Speaking after the hearing, HSE inspector Lyn Mizen said: 'This tragic incident could have been averted if the required periodic tree safety inspections, as per the Staffordshire County Council’s own code of practice, had been carried out.

'Local Authorities need to ensure they have suitable inspection systems in place, including monitoring and audit provisions, to guard against situations such as this, and to ensure they have enough suitably trained and competent tree inspectors to enable compliance with their tree management policies and codes of practice.'

Around six people are killed from falling trees or branches in the UK every year. In September last year we brought you a story about the Birmingham Angler’s Association, which was fined £66,000 after one of its volunteers suffered a brain injury and later died when he was hit by a falling branch while cutting back and clearing vegetation along a riverbank.

In 2020, in a similar incident to the Staffordshire case, Wirral Borough Council was fined £100,000 after a large branch fell from a tree, seriously injuring an eight-month pregnant woman and subsequently leading to the death of her baby girl who had to be delivered by an emergency caesarean. In that incident, the tree in question hadn’t been inspected for at least 13 years.