How Balfour Beatty is learning and leading 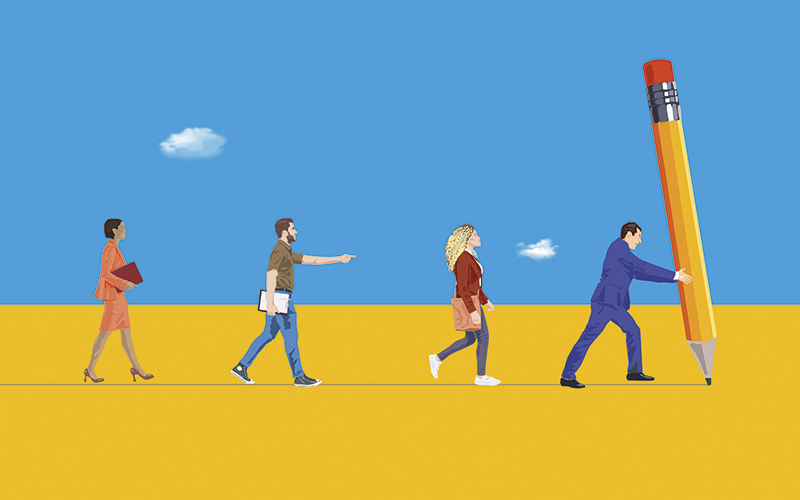 In the past, health and safety professionals focused on learning from mistakes by investigating accidents and studying near misses. However, in recent years there has been a growing recognition of the importance of learning from what goes well.

International construction company Balfour Beatty hit a milestone of five years without a RIDDOR – Reporting of Injuries, Diseases and Dangerous Occurrences Regulations – and five million worker hours RIDDOR-free during the construction of Woolwich station, part of London’s Crossrail project. Steve Crofts, the company’s health, safety, environment and sustainability director for major projects, highways and investments, realised this was the perfect opportunity to learn from Balfour Beatty’s success. Balfour Beatty approached Loughborough University and asked them to identify what had made this project stand out and what the company could do to replicate this exceptional performance everywhere.

The construction sector has worked hard over the past 15 years to improve its safety record and to redress a reputation for being dangerous and ‘macho’. It remains a tough industry to work in, with a dynamic environment and high-hazard activities, and often involves a transient workforce and complex supply chain. Woolwich station presented its own challenges as it was the last of 10 new Crossrail stations to be awarded a contract, and needed to be integrated into a complex system with tight deadlines. At the peak of the project, around 1000 people were working across five sites on both sides of the River Thames.

Loughborough researchers arranged 19 interviews with personnel from Crossrail (the client), main contractor Balfour Beatty and the supply chain, including engineers, electricians, labourers, managers, agency workers and health and safety professionals. Interviews covered all operations from pre-construction to completion. Out of this came clear messages about the factors contributing to good OSH on the project. 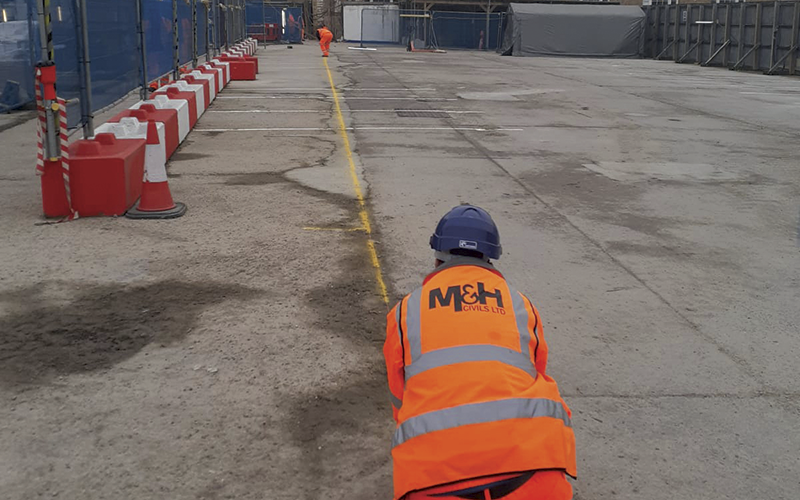 Of the themes that emerged, the most consistent was the high visibility and engagement of project leaders. This was true for managers throughout the chain, including project directors, construction leads and the works manager, as well as senior Crossrail personnel. Examples of effective leadership included the following:

This leadership helped to embed a positive safety culture. There was an expectation that the workforce would become part of that culture, and this became self-reinforcing. Interviewees also said people were unafraid to report problems and mistakes as the project adopted a ‘just culture’ – a workplace that focuses on ‘What went wrong’ rather than ‘Who is to blame for this?’. Workers who did not work to the expected high standards were supported to learn and improve.

The safety culture was built around Balfour Beatty’s golden rules (see panel above). Because managers used and enforced these in a supportive style, they were adopted in spirit as well as in word. For example, several interviewees said the concept of ‘fit for work’ included mental fitness as well as the need to consider the personal and psychological challenges workers might be facing. 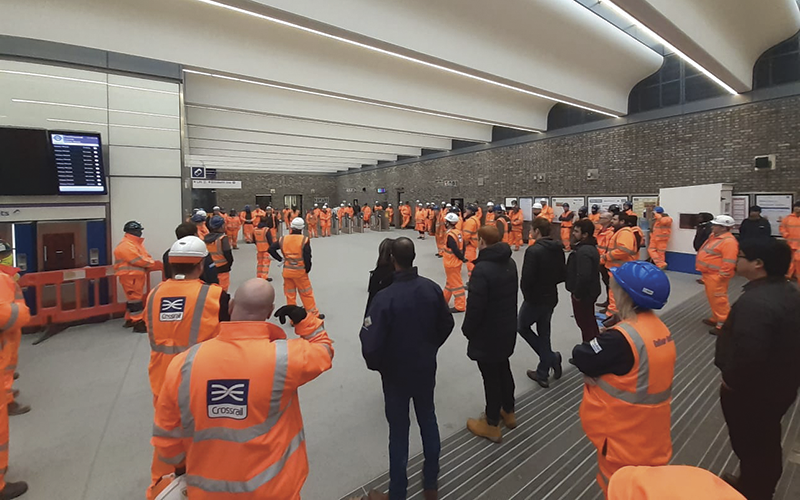 Many interviewees used words such as ‘family’, ‘one team’, and ‘inclusive’ to describe the project’s ethos. This reflected the fact that workers felt welcomed and valued, and that they were known as individuals – a sense of ‘we’ rather than ‘them and us’. Turnover on the site was low, making it easier to develop relationships. Challenges arose, but the approach taken was conciliatory, with trust and collaboration between the client, main contractor and supply chain. Managers reported being open when the project faced difficulties, and sought to share any mistakes with the client as part of the learning process.

Project communication was built around daily briefings by senior managers for all workers. Site plans for the day were shared, as well as learning points from other Balfour Beatty projects. Briefings were followed by smaller point-of-work briefings led by supervisors for their teams about specific daily plans. This format ensured daily briefings were engaging, interesting and relevant.

Additionally, a monthly ‘Stop for Safety’ briefing would focus on a topic of interest, such as working at height or plant operation. As with the daily briefing, there was an emphasis on making sure a senior manager was visibly present, and on the event never being cancelled or delayed. The leadership team also dispensed with signing in attendees, relying on trust and site culture to ensure all had attended.

Workers felt welcomed and valued, and that they were known as individuals – a sense of 'we' rather than 'them and us'

Reward and recognition were a priority at Woolwich. Workers were recognised for doing their job consistently well, doing something out of the ordinary, stopping unsafe activities, and perhaps even for completing an observation card. Anyone, whether a team or an individual, could be nominated for an award. Prizes ranged from £25 shopping vouchers to a Fitbit or iPad.

Rewards were presented and celebrated in front of colleagues with senior managers present. This sent a strong message about the behaviours valued on-site and encouraged pride in good practice. One manager said workers would often be proud to tell their families about rewards, further reinforcing good practice.

Workers were also encouraged to keep their families in mind to motivate safe working. One of the project directors introduced a ‘This is why I work safely’ poster, where he put up a picture of his family, with a caption. Others added pictures of their families, children and pets. This served to remind people of commitments outside work and the importance of working safely.

The physical environment also contributed to good safety practices on-site. This was a further impact of engaged senior managers, who put substantial effort into getting the site’s design right from the start. The client’s enlightened attitude helped enable this as sufficient time was built into the contract for a mobilisation period before work started. Examples included good segregation between people and plant, permanent pedestrian walkways, designated refuelling areas, subcontractor laydown areas to improve housekeeping and minimise lifting, a one-way system for vehicles, extensive scaffolding to reduce the use of mobile elevating work platforms, and using HAKI scaffolding staircases to reduce reliance on ladders.

The Woolwich project’s good OSH performance was largely a result of competent and visible safety leadership by managers on the project, and a culture that regarded the workforce as adults – treating them well, but with high expectations. These might seem to be slightly underwhelming findings, but it seems there is no ‘magic bullet’ for good safety outcomes. Others will recognise that, far from being disappointing, this is evidence of the importance of everyday good practice taken seriously by all. With expert, respectful management and supervision, anything is possible. And if that is true in the fast-paced, historically troubled field of construction, it can work anywhere. 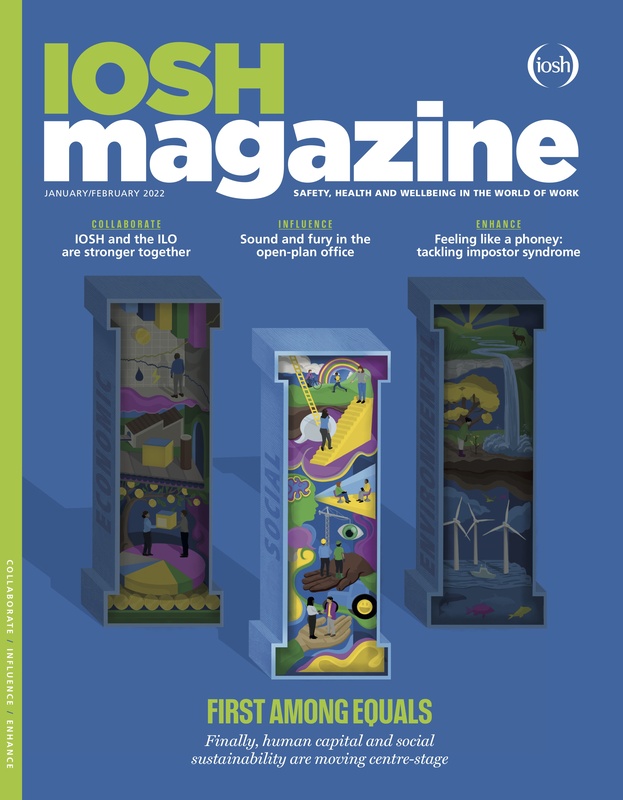