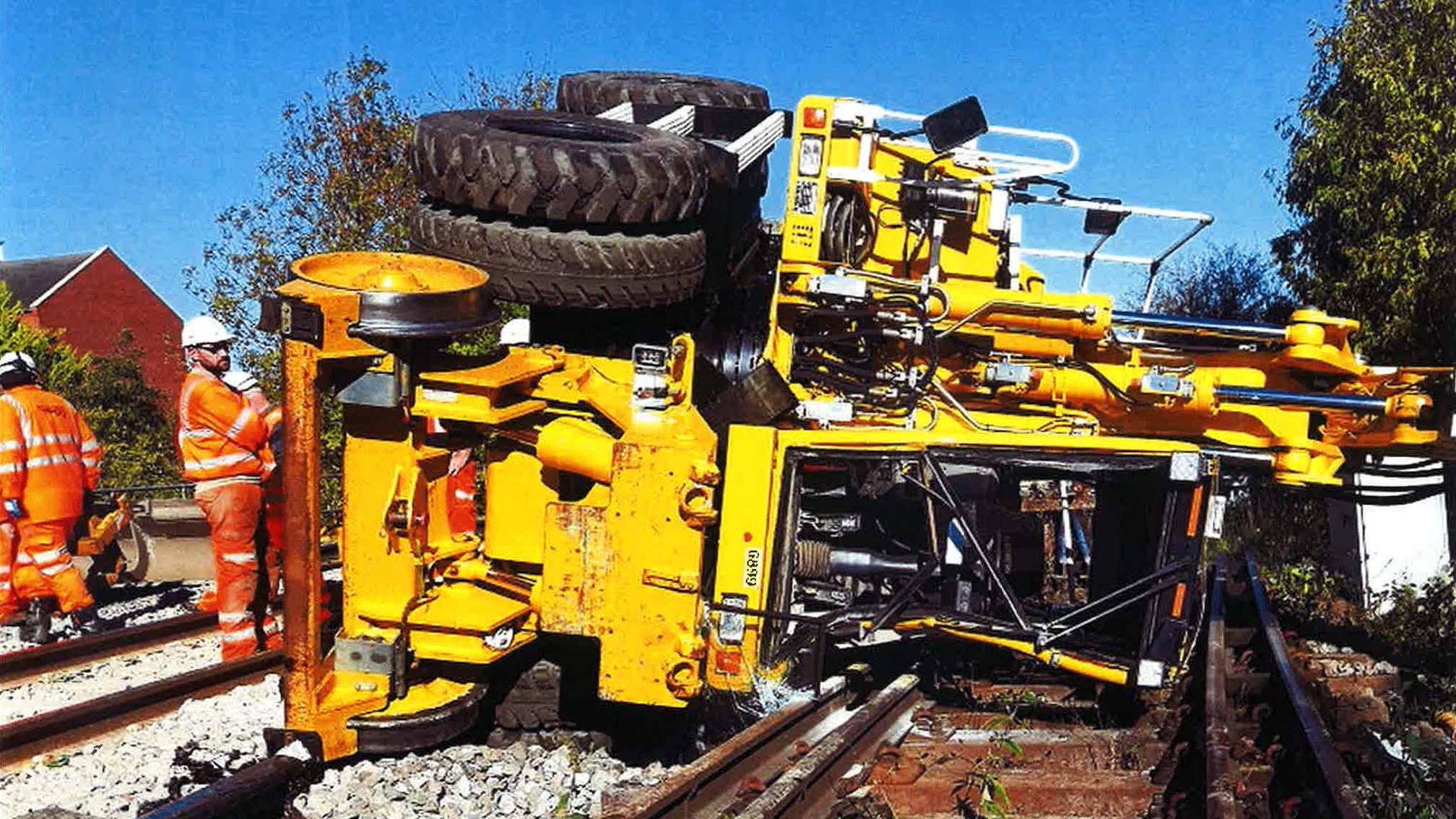 With the help of HM Inspector of Railways Sean Devaney and Office of Rail and Road (ORR) senior legal advisor Chloé Barton, we look at the catalogue of errors that led to a road-rail excavator tipping over in an accident that resulted in construction giant Amey being fined a £600,000.

On 21 October 2018, rail infrastructure and engineering company Amey was involved with the reconstruction of Market Harborough station. Specifically, the track was being realigned and a series of points at the southern end of the station was being removed. To do this, workers cut the track into panel sections and road-rail machines (excavators) lifted these panels onto waiting flatcar trains.

The stages that led to the incident

In the week leading up to the accident, it was decided that rather than having very big excavators that could easily lift a 30ft track panel, but which couldn’t manipulate ballast, it would be preferable to use excavators that are better suited to moving ballast as well. Two different machines with a lower lifting capacity than originally expected were ordered.

Because these machines had a much lower lifting capacity, the plan was adjusted to remove 20ft panels of track instead of 30ft panels. However, the change process wasn’t followed successfully and the working arrangement plan was reissued showing the reduced machine lifting capacity, but not the requirement to cut the track panels to a smaller size.

In addition to this, the rails had already been marked with cut points at 30ft. The burners who cut the track were not aware that they should be cutting 20ft panels, so they cut at the marks, creating 30ft panels.

Road-rail machines have a Ratinged Capacity Indicator (RCI) – a piece of equipment that is designed to take into account all the important different factors to calculate the maximum lift that can be undertaken. If the machine gets close to the acceptable parameters, the RCI will give a yellow warning. When it reaches into the red, the RCI will shut the machine down, to prevent the machine from moving. A supervisor will have a switch key that they can then insert into the machine to override the RCI. One of the machine operators used the supervisory key to disable his RCI (by turning it to ‘Dig’ mode) early on in the job. The second machine operator kept his RCI in operation.

The two machine operators grabbed the first 30ft track panel but as they go to ‘break out’ (which means, make the initial move) the first piece of track, the second machine’s alarm went off. Break out pressure should never set off an alarm. An instruction was allegedly given to switch off the second RCI. At this stage, all the protection was now gone and safety was entirely in the hands of the operators.

The workers got to a point where they were going to have to pull out a panel with a set of points. For technical reasons, and because the planning had been inadequate, the track panel section for extraction here had increased from 30ft to 39ft.

Although the weight of the track panel new exceeded the safety margin and was in effect overloading both road-rail machines, the operators managed to get it to the location where it was to be lowered to the ground.

As the track panel was being lowered to the ground, it overbalanced one of the road-rail machines, which started to overturn.  The operator in the other machine saw what was happening and managed to lower his end of the load, saving his machine. However, because communication had failed, the other operator had no way of telling his colleague this was dangerous. In the other machine, the demand went over the safety margin and the machine was tipped over. The machine fell on the rail and the door of the machine buckled up to trap the operator.

Other workers smashed the cab glass to extricate the operator. He, miraculously, escaped with only minor injuries.

At Leicester Magistrates’ Court on 12 November, Amey Rail Limited was fined £600,000 after pleading guilty on a basis to the offence. Amey was also ordered to pay full costs of £15,119 and a victim surcharge of £170.

In sentencing, District Judge Watson said that there was not a single individual that failed but that there was a failure to coordinate the actions of individuals, and that was fairly and squarely the responsibility of the company. DJ Watson said the fine needed to bring home to the shareholders and directors of Amey the need to comply with health and safety legislation.

Earlier this year, waste company Enterprise Managed Services, part of Amey, was fined £1.2 million after a worker was fatally injured by a reversing vehicle.