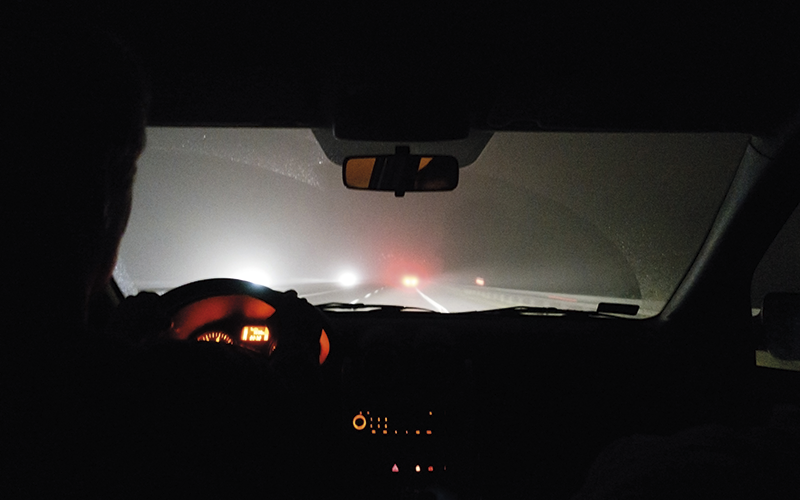 Understanding the conditions that cause eyesight to deteriorate is crucial for driver safety. How should OSH professionals manage driver eye health in the UK?

The earlier sunsets and darker road conditions that accompany the clocks going back in the UK every October can make vision difficulties more noticeable to drivers. Around 2900 road casualties are caused by poor driver vision every year in the UK, and bad eyesight is recorded as a contributory factor in less than 1% of recorded crashes, according to the Royal Society for the Prevention of Accidents (RoSPA, 2017).

An estimated 1.8 million drivers are officially below the legal minimum standard of eyesight for driving (RoSPA, 2017), and up to one-third of all crashes involve someone driving for work, according to the GB Health and Safety Executive (HSE) and Scottish Government research (ScORSA, 2012).

‘Driver health is fundamentally important, and driving risks should be managed like any other risk to the organisation,’ says Dr Karen McDonnell, head and OSH policy adviser at RoSPA Scotland. ‘At RoSPA we would call this a “safe at work, safe at home” issue, because you take your physiology everywhere.’

When it comes to measuring the impact of poor vision on road safety, the picture is more complicated. The SafetyCube Decision Support System, based at Loughborough University, provides interactive information about road accident risk factors and related road safety countermeasures. Its research finds: ‘The current knowledge about visual impairments and crash risk suggests that visual acuity is very weakly associated with crash risk, while contrast sensitivity, visual field, and in particular cognitive aspects of vision have better evidence for their relevance to road safety’ (SafetyCube DSS, 2016).

So visual acuity, which is generally tested when applying for a driving licence, does not appear to have clear causal links with road accidents. Ross Whalley, partner at law firm Leigh Day, says road traffic accidents often do not have a single cause and it is often open to interpretation whether vision impairment is a factor. ‘A lot of it comes down to general negligence, such as not seeing things, not looking properly, not realising someone is there, and general hazard perception,’ he says.

According to Assessing fitness to drive: a guide for medical professionals (GB Driver and Vehicle Licensing Agency (DVLA), 2018), if an optometrist finds after a sight test that someone doesn’t meet the required standard to drive under the terms of their licence, they will advise the person that they have a legal obligation to notify the GB DVLA. The DVLA will then normally arrange a separate eye test and occupational health assessment.

‘If, however, a healthcare professional is aware that the person has decided not to follow that advice and has continued to drive while not meeting the required standard, then we have a professional duty to act in the public interest and to disclose that directly to the DVLA,’ Daniel Hardiman-McCartney at the College of Optometrists says. ‘That would be one of the very few situations where breaching confidentiality is acceptable, and no optometrist or GP will do this lightly. They do not like to breach confidentiality unless they really, really have to.’ Driving with the knowledge that your eyesight doesn’t meet the required standard is a criminal offence.

But vision is the most important sense for driving, and many eye diseases can affect drivers’ ability to meet the required standard for various vehicle licences. The DVLA has a list of conditions that should be reported if drivers are diagnosed with them.

‘If you are affected by any of these conditions, you need to have regular sight tests to ensure they don’t change – and it’s important to remember that although you may have met the standards [to drive] two years ago, you may not meet them now,’ says Daniel Hardiman-McCartney, optometrist and clinical adviser at the College of Optometrists.

For example, cataracts – which are usually caused by ageing and sometimes by injury, spending too long in the sun, taking steroids and smoking – can cause cloudy or blurry vision, faded colours, seeing double, and headlights or sunlight appearing too bright. Glaucoma is also usually caused by ageing, and can be linked to conditions such as diabetes, short- and long-sightedness. It manifests as blurred vision or seeing rainbow-coloured circles around bright lights. Diabetic retinopathy (DR) causes vision to gradually worsen, as well as floating shapes, eye pain or sudden vision loss.

For these diseases, treatments include eye drops, laser correction, injections and surgery. New treatments are emerging all the time, too. For example, gas-permeable contact lenses can be worn overnight and gently reshape the cornea so that vision is clear the following morning.

But time is really of the essence. With glaucoma, for example, it’s not possible to reverse any loss of vision that occurred before diagnosis. DR can be prevented from getting worse by seeing an optometrist or GP when symptoms begin appearing. Eye examination and sight tests can offer early detection, and benefit health and wellbeing generally.

Under GB guidelines, Driving and riding safely for work (HSE, 2021), employers must make sure drivers are safe and healthy and have the required physical capabilities – including no sensory impairments – and training to drive safely. The duty of care to employees while driving covers any policies and training focus on safe driving, vehicles and routes. Within this guidance is the requirement to ensure all drivers have regular sight checks.

Employers should also be aware of limits on working time. A law firm cites one case (Arthur Cox, 2020) that appears to have been settled out of court in which the family of an employee killed in a road traffic accident claimed he was working excessive hours and should have been provided with accommodation rather than having to drive home late. Anyone put at risk by work-related activities, including self-employed and gig workers, should be considered too.

This duty of care, from employer to employee and members of the public, applies to people driving as part of their job or travelling somewhere for work purposes but not the wider community. Although employees have to consent to medical treatment, employers and staff should agree the requirements for medical screening and/or the examination of employees in a written contract of employment. 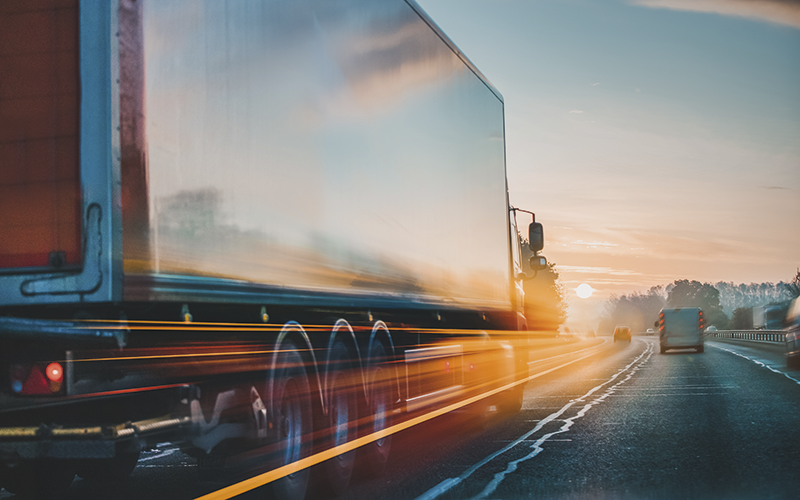 Risks on the road

But it’s not just about disease. ‘Glare is a distracting reflection that can affect all drivers. It makes your eyes less effective at focusing on what they need to focus on,’ Daniel adds.

Dry and uncomfortable eyes can also affect people at this time of year, especially if the vehicle heating is blasting warm air into the face.

The big issue that causes eyesight to worsen, and the one that affects us all, is age. ‘As you get older, your eyes naturally deteriorate,’ says Daniel. ‘Different lighting conditions can take longer to adjust to depending on your age, wet weather conditions may demonstrate that your vision isn’t as clear as it once was, and presbyopia – the need for reading glasses – may become clear if it’s harder to read the dashboard or the GPS.’

Daniel notes: ‘We don’t see higher incidences of diseases [from driving for work] and driving doesn’t cause short- or long-sightedness.’ Nevertheless, research has found an association between ultraviolet light, which those who drive occupationally may be more exposed to, and some ocular diseases (Yam et al, 2014).

Daniel says that, anecdotally, people who drive for a living are more sensitive to small changes in their eyesight and will notice a difference in the clarity of their vision at night and in daylight. ‘For someone driving 100,000 miles a year in a lorry, a small change in prescription can make a huge difference,’ he says. ‘The lorry drivers that I see benefit from having an extra pair of glasses they put on at night.’

All motorists (Group 1) are required to be able to read a number plate from 20 metres away. However, a recent survey found less than half of motorists knew this (GB DVLA, 2021). If they need glasses or lenses to do this, they must wear them.

Lorry and bus drivers (Group 2) must meet more stringent eyesight requirements – a visual acuity of 0.8, compared with 0.5 for Group 1. When they first apply for their bus or lorry licence, they must have a medical and vision check. From the age of 45 they must have these checks every five years, and every year from the age of 65.

Vision requirements for taxi drivers are set by local authorities, but are often the same as for Group 2. The rules may also change from country to country. For example, Italy, Hungary and Spain are just three of numerous countries that require visual assessments every 10 years.

If a motorist has a problem with their eyes that isn’t colour blindness or short- or long-sightedness, they must inform the DVLA, usually by reporting online, and need to fill in different forms depending on their type of licence. The relevant problems may include cataracts, a detached retina, diabetic retinopathy or glaucoma.

If a driver feels their eyesight is getting worse, they should see an optometrist. ‘The overarching question is: what are the visual requirements for the type of vehicle and work you do, and do you meet those standards,’ says Daniel at the College of Optometrists. Under the Road Traffic Act 1998, if an employee drives for work without a proper licence or insurance, is driving carelessly or dangerously, the vehicle was unsafe or they haven’t followed company driving policies or procedures, they are legally liable.

What OSH professionals can do

Employers should manage driver health in the same way as any other risk to their staff. ‘I would expect any employer to understand, on behalf of their organisation, if someone should be wearing glasses or contact lenses,’ Karen says. ‘The impact of the pandemic on people’s health has been widely recognised, and employers should be having those check-ins with their staff.’

In particular, there is a need for different professions to work together on driver eye health, such as OSH, HR and fleet management, for example. ‘When someone comes into work, you need to understand what they are bringing with them – whether that is diabetes or poor eyesight,’ Karen says. ‘This is about being person-centred and understanding who is in front of you.’

OSH professionals should lead these conversations about eyesight and other conditions with employees who drive.

In the event of an accident, drivers should automatically have a sight test. ‘Say you have developed glaucoma, but as far as you are aware, your vision seems as good as it was. But actually your sight could have been a factor in that accident – the only way that you can be sure is if you have a sight test.

‘People who drive for work are sharing the same space as cyclists, pedestrians, powered two-wheelers. We have got to ensure that these drivers are not predisposing them to risk,’ Karen says. 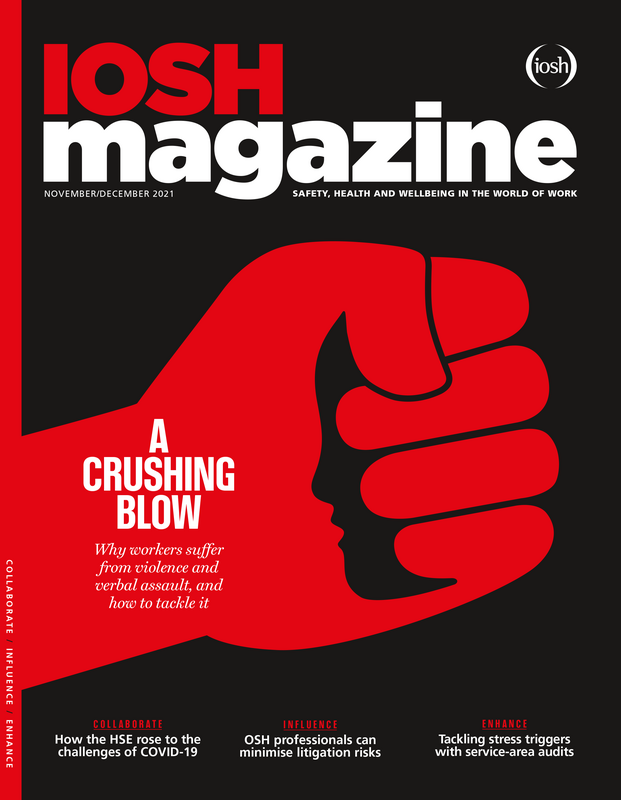