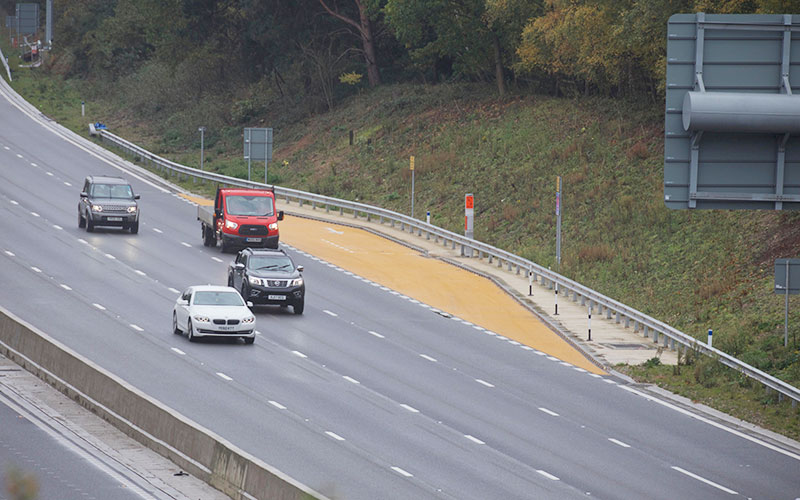 An Office of Road and Rail (ORR) report that provides quality assurance of safety data relating to All Lane Running (ALR) motorways supports National Highways claims that this type of smart motorway is relatively safer in comparison with other roads in terms of fatalities.

However, the ORR’s Quality Assurance of All Lane Running Motorway data report also makes a number of key recommendations to enhance the data and evidence, including the need for a regular evaluation of the ALR motorways as more data or better analytical techniques become available.

Road industry observers have welcomed the ORR’s independent analysis and agree that continuous monitoring and further evaluation is essential to achieve a more accurate picture of safety performance over a prolonged period of time.

ALR motorways are one of the three types of smart motorways that have been in operation on England’s Strategic Road Network since 2014. The other two are Controlled Motorways and Dynamic Hard Shoulder Running motorways. ALR motorways feature variable speeds and the hard shoulder is converted to a permanent ‘live’ running lane, with emergency areas located at intervals.

The removal of a hard shoulder has been a controversial move and safety concerns relating to this unique feature prompted a BBC Panorama investigation in 2020, which submitted a Freedom of Information request to Highways England and found that 38 people had died on ALR motorways since 2014.

Highways England was created as an arms-length body of government from the Highways Agency and has recently changed its name to National Highways. Its remit includes operating, maintaining and improving motorways and major A roads in England. The body has come under fire for its running of ALR motorways.

In February, National Highways was referred to the Crown Prosecution Service for manslaughter in connection with the death of Nargis Begum who died on a stretch of the M1 in September 2018 when her car, which had broken down in the running lane, was hit.

In response to concerns about the operation of ALR motorways, the government announced a number of measures to enhance safety in 2020.

In addition, the Secretary of State for Transport Grant Shapps commissioned the government-owned body to produce a National Highways Progress Report earlier this year, which outlines how these measures have been actioned to date as well as how to fast track other improvements, including the use of radar technology to detect stopped cars in live lanes.

When it published its progress report in April, National Highways claimed that fatalities on ALR motorways are less likely than on conventional motorways where there is a hard shoulder.

In a further move, designed to provide an independent assessment of the conclusions drawn by National Highways, Shapps requested that the ORR carry out a quality assurance of the data and evidence that underpinned the progress report.

To strengthen the analysis further, the ORR also interviewed relevant staff at Highways England and the DfT to better understand the data and evidence that underpins the conclusions being drawn on the relative safety of ALR motorways.

In addition, it reviewed evidence given to the Transport Select Committee’s Smart Motorway Inquiry in early 2021 and also sought independent advice from an expert econometrician to provide an external review of its own analytical approach.

Although the ORR findings concluded no errors in the underlying calculations, its report, published on 28 June, did note that there was ‘a limited amount of data available’.

‘This means that only 29 miles of ALR has a full five years’ worth of data associated with it, and much less data are available for the remaining 112 miles.’

After evaluating the high-level statistics, the ORR also concluded that, although the comparisons about ‘the relative safety of ALR motorways were made in an appropriate way’, there were some issues in the tools that were used to underpin the risk modelling.

For example, comparisons between conventional motorways and smart motorways ‘did not always separate the types of road’, which ‘may have obscured the impact of the removal of the hard shoulder’.

One of the ORR’s key recommendations is that all sources of evidence should continue to be evaluated regularly as more data or better analytical techniques become available.

Neil Greig, policy and research director at independent road safety charity IAM RoadSmart, believes that smart motorways need to be given more time before their safety performance can be accurately assessed.

‘They need to put the systems in place they promised such as the radar technology vehicle detection and they do need more data,’ he said.

Interestingly, Neil added that most of IAM Roadsmart’s members don’t like ALR motorways because of the loss of the hard shoulder.

'IOSH believes that more should be done to protect people from the hazards, so any technological developments should improve road safety’

He pointed to a member web poll published in April that found that most of the 4,500 drivers surveyed expressed no trust in ALR motorways.

‘Our members are predominantly experienced, confident drivers who have taken the advanced driving test and they know their way around a vehicle and the road and the results surprised me,’ he added.

Of those who responded, 85% said they would want to halt the construction of smart motorways until the safety case was fully proven. Furthermore, 84% expressed little faith in the current systems’ abilities to detect them having stopped in the running lane if they were to break down and to protect them until help arrived.

Dr Laura Bradshaw, research programme lead at IOSH, said that all employers who have drivers on the road had a vested interest in improving road safety.

‘As work-related road traffic accidents are a significant cause of preventable death and injury, IOSH believes that more should be done to protect people from the hazards, so any technological developments should improve road safety,’ she said.

She added that only around 5% of the ALR motorway network had had the radar technology installed to detect broken down vehicles and said IOSH would like to see more research as well as the monitoring and evaluation of larger stretches of the network over a longer period of time.

‘The shortage of data won’t be resolved immediately and it presents a challenge,’ she says. ‘There have been calls to scrap the ALR motorways and have the hard shoulder available to improve immediate safety or failing that, to have more of the emergency lay-by areas put in at more regular intervals.’

The ORR acknowledges that, since the Smart Motorways Stocktake: First year progress report was published this year, National Highways has made further improvements to the safety of ALR motorways.

The government-owned body has also announced further measures to enhance safety, including a soon-to-be published and revised Highway Code, which will include driving tips on how to use ALR motorways.

‘Safety is of paramount importance to the logistics industry; robust data must be used to carefully assess their safety record and to determine any changes that are needed.’