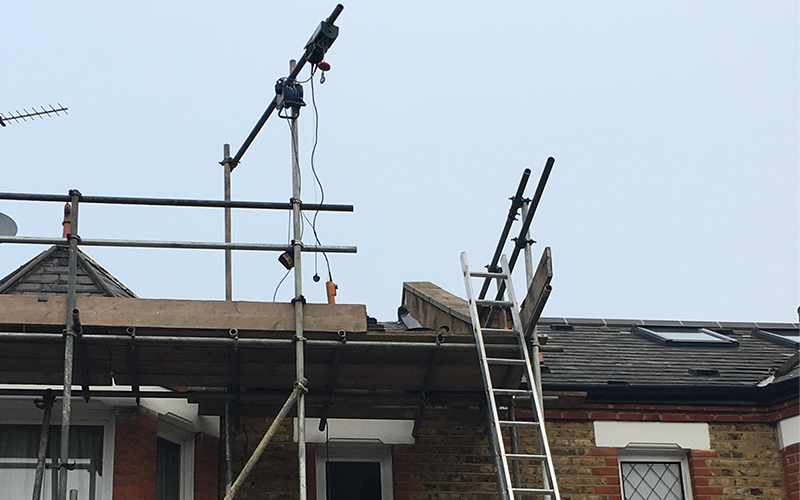 A roofer and scaffolder who have been prosecuted over a fatal fall from the roof of a two-storey terraced house did not put simple preventative measures in place to avoid the incident.

Roofers Philip Drinkwater and Anthony Bradley were working on the  property’s roof in Rosevine Road, Wimbledon in southwest London on 26 November 2018 when the incident happened.

A Health and Safety Executive (HSE) investigation found that the pair were accessing the roof using a ladder and scaffolding that had been erected by Dean Glen.

Later on that day, Drinkwater asked Bradley to help him move some slates up onto the roof using an electric hoist. As he was carrying the slates up, Bradley fell around 6 m through a gap, which was adjacent to the hoist and landed on the ground. He died almost immediately.

The HSE’s investigation found that when Glen erected the scaffold, he’d left a 1.17 m gap in the edge protection at the ladder access point and did not fit a scaffold gate.

Glen was not fully qualified to erect the scaffold and the investigation also found that the equipment did not comply with industry standards nor legal requirements.

Drinkwater, who was in charge of the roof work, had allowed the activity to proceed despite the gap in the scaffold and the unsafe ladder access. The HSE also found that he was not adequately trained to manage health and safety on the site and had failed to appoint a suitably qualified scaffolder to erect the scaffold.

Drinkwater (trading as Prestige Roofing) of 17 Meldone, Sheephouse Way, New Malden, southwest London, pleaded guilty to breaching s 3(2) of the Health and Safety at Work Act at Southwark Crown Court this week. He was fined £5,000 and ordered to pay £6,318 in costs.

Glen (trading as DDP Scaffolding) of 1 Woodroyd Avenue, Horley, Surrey, also pleaded guilty to breaching s 3(2) of the HSW Act. He was fined the same amount and handed the same costs.

HSE inspector Kevin Smith said: ‘Preventative measures were inexpensive and required little time or effort. Reducing the size of the opening in the guard rails and installing a self-closing scaffold gate would have stopped this man from falling to his death. A scaffold date costs around £40 and only takes a few minutes to install.

‘Those involved in scaffolding and roof work on smaller sites need to be aware of the potentially devastating consequences of failing to put basic safeguards in place.’