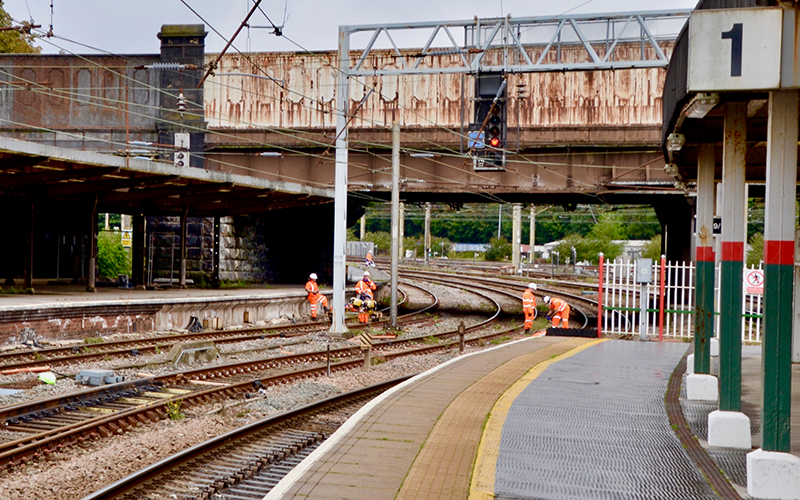 The Office of Rail and Road’s (ORR) annual report of health and safety on Britain’s railways highlights worker safety as a top priority for Network Rail after the death of three rail employees, including two track workers.

Published on 13 July, the rail industry regulator’s 2020-21 report credits Network Rail for taking action to improve track worker safety, including reducing the proportion of trackside work that relies on human lookouts from 15.9% to 7% between 2019-2020 and 2020-2021, with plans to remove the practice entirely by the end of this year.

However, the ORR adds that Britain’s railway infrastructure operator must demonstrate better use and deployment of technology to reduce safety risks, such as automatic warning equipment, in particular for line blockages.

Ian Prosser, director of railway safety at the ORR, noted in his chief inspector’s review in the report that track worker and depot worker safety was one of the three main challenges facing the rail industry.

Although the rail sector has seen an almost 40% reduction in near-misses over the past 12 months between workers and trains, the year had also seen an increase in workforce fatalities.

For the second consecutive year, two track workers were struck and fatally injured on the mainline network by trains while a Network Rail worker died in a machinery incident.

‘The two fatal track worker accidents on the mainline network serve to remind of the continued necessity of planning work to avoid working whilst trains are running and developing and implementing systems of work that provide improved protection and warning,’ the report notes.

'Although the rail sector has seen an almost 40% reduction in near-misses over the past 12 months between workers and trains, the year had also seen an increase in workforce fatalities. '

Prosser adds that the fatalities also emphasise the importance of improving the safety culture in frontline teams.

Network Rail’s Safety Task Force, the report notes, has taken positive steps to implement improvements, with the year seeing steady (albeit variable) progress across all routes.

For example, after the death of the track worker at Surbiton in southwest London on 9 February 2021, Network Rail took the decision to ban protection using lookouts and move to more reliable methods of protection.

However, despite praising Network Rail for its significant achievement in reducing risk by cutting the amount of work using unassisted lookout protection, the ORR warns that the Surbiton fatality shows that safety improvement has been inconsistent across the country.

From its inspection work, the rail regulator notes that the number of line blockages that rely solely on signaller vigilance to prevent trains accidentally being signalled into work areas remains ‘stubbornly high’, and the availability of line blockages remains limited by the amount of work that a signaller can be expected to do safely.

‘Linked to this is the slow uptake and use of automatic protection and warning technology such are remotely operated track circuit operating devices and semi-automatic track warning systems,’ the report notes.

‘This was partly due to the pandemic but also due to technical problems and teething troubles in learning how best to use the new technology.’

The ORR says it welcomes Network Rail’s renewed commitment to remove lookout working, but it does have concerns about the sustainability of making this move too quickly.

‘Removing the need to routinely work with lookout protection needs to be done in such a way that a permanent way can be maintained safely and without transferring the risk elsewhere’.

‘Removing the need to routinely work with lookout protection needs to be done in such a way that a permanent way can be maintained safely and without transferring the risk elsewhere,’ the report says.

‘Providing secure additional protection for line blockages, and ensuring possessions are securely protected will be essential to carrying out maintenance work safely in the future,’ the report says.

The ORR also wants to ensure that the downward trend in Signals Passed at Danger risk across industry continues.

The regulator is commencing a two-year programme of inspections to look at operational incidents and says it will focus on control room decision-making to help lower the risk further.

On the issue of depot safety and ensuring there are improvements, the ORR will continue to monitor the effectiveness of the Rail Delivery Group depot safety sub group of Passenger Operators Safety Group to ensure that the focus on worker safety and culture in depots is maintained.