GB work fatalities up by almost a third 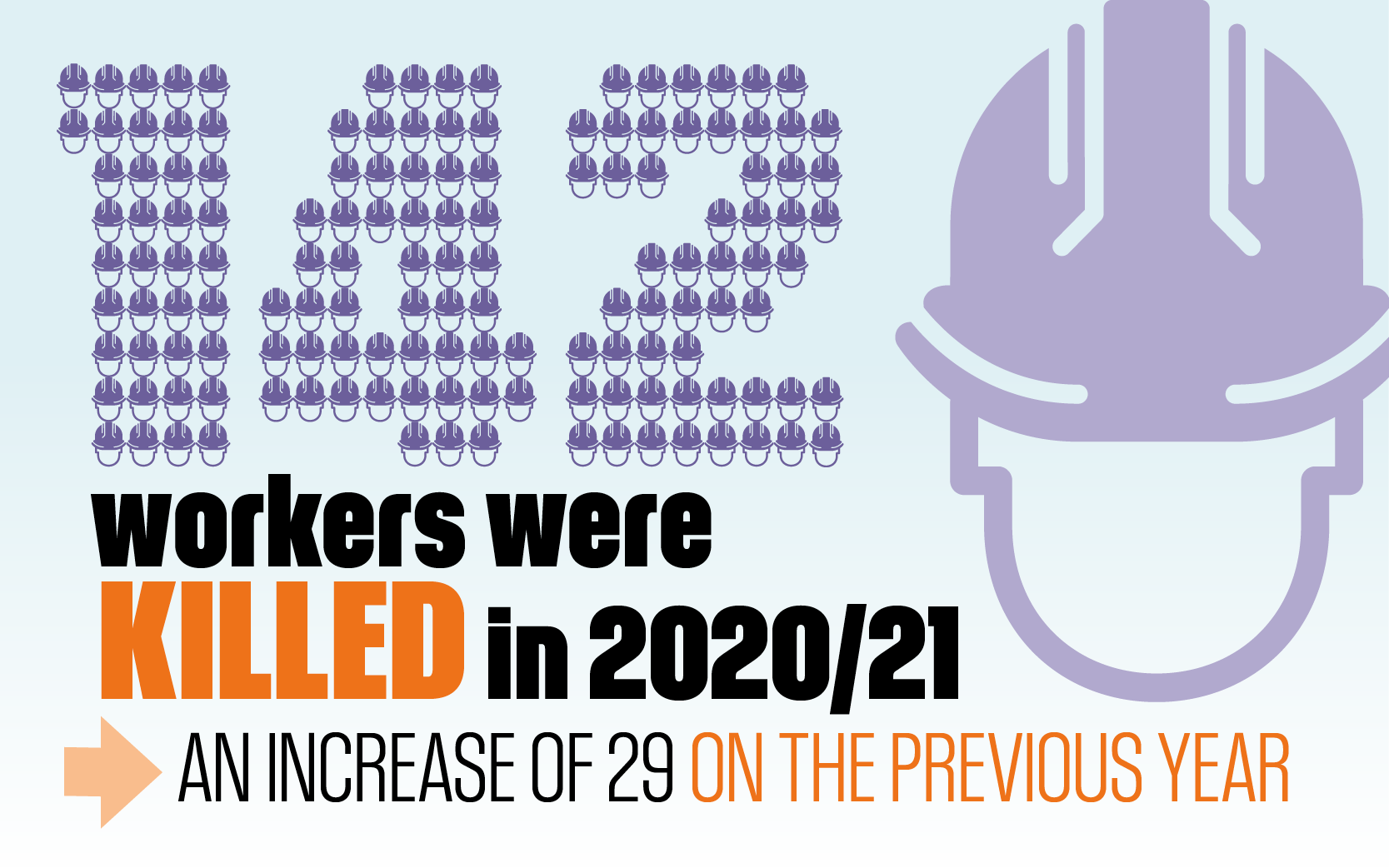 Covid disruption, wide scale furloughing of workers and a 10% reduction in weekly hours worked has been accompanied by a 28% year-on-year increase in the number of work-related fatal accidents, according to Great Britain’s annual fatality statistics.

At the time, last year’s low was partly linked to Covid depressing economic activity in February and March 2020. But this year’s figure – also rising above the five year average of 136 workplace fatalities – suggests that Covid-related sickness absence, wide scale furloughing and the displacement of workers into new roles could have comprised safety standards at work.

At the same time, while asserting that the pandemic 'makes interpretation of comparisons with earlier years difficult', the Health and Safety Executive (HSE) quotes figures from the Office of National Statistics’ Labour Force Survey suggesting a 10% reduction in hours worked in 2020/21 due to the effect of furlough, and that the Coronavirus Job Retention Scheme (CJRS) cumulatively affected 11.4 million roles up to March 2021.

Ruth Wilkinson, head of health and safety at IOSH, said: 'Increases in fatalities are very concerning, but we must also remember that lockdown restrictions in 2019-2020 may have be a contributing factor to the previous year’s record low figures rather than improved risk management and prevention in the workplace.

'Workplace deaths are only ever the tip of an iceberg of health and safety failure, which is why we encourage employers to ensure that they are managing the safety and health risks in their workplaces. This includes any new risks that may be presented through new operating models, new technology or equipment, and so on.' 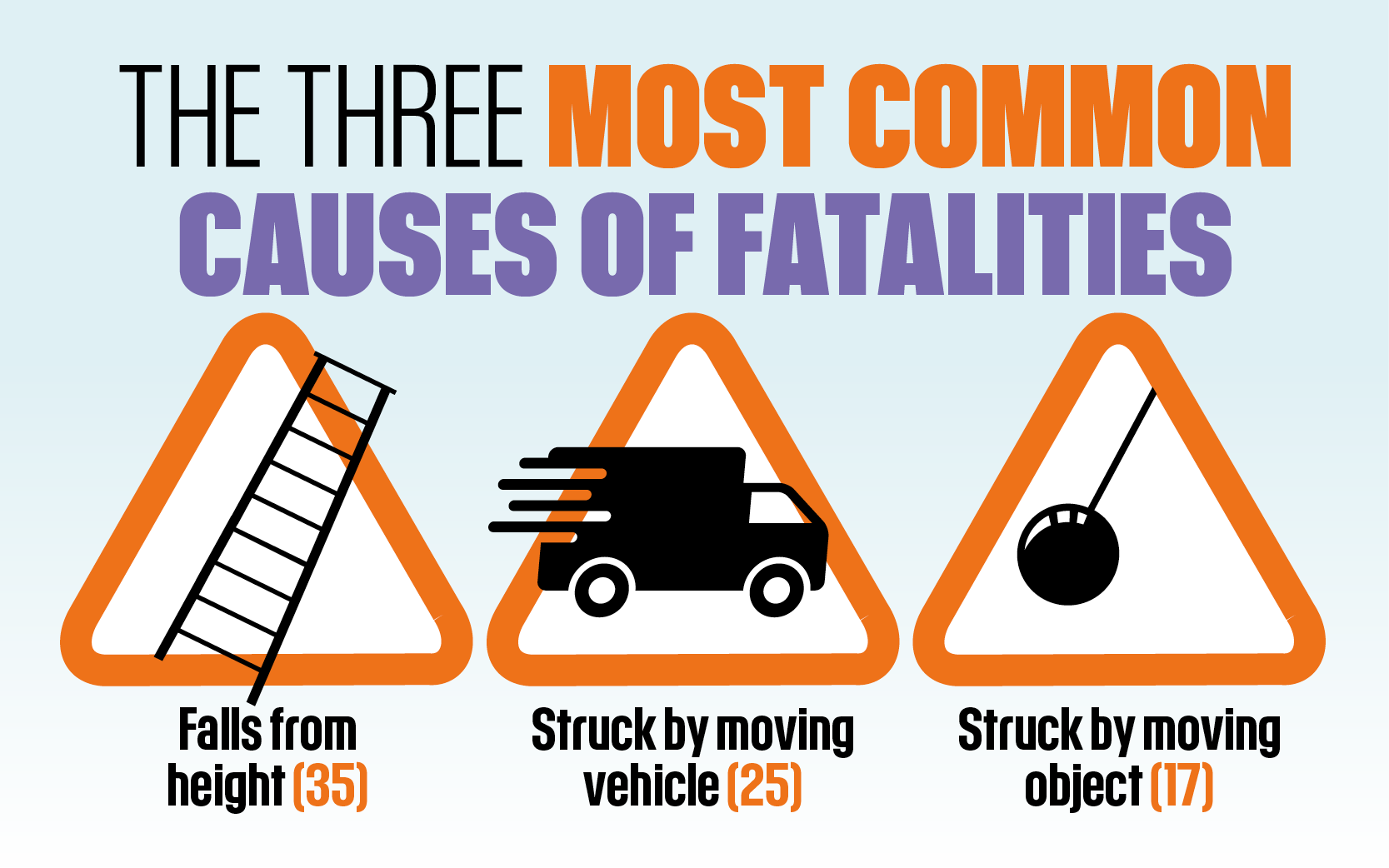 'The fatal accident data for February and March 2020 showed a relatively low number of fatalities as compared with other recent time periods. This suggests that the pandemic would ultimately have a positive impact on the number of reportable workplace deaths (bearing in mind that Covid-19 deaths are not included within the HSE’s fatality statistics). More workers were switching to working from home and millions benefited from the furlough scheme.

'However, this improvement has not materialised. The HSE pointed to the difficulties comparing the statistics for 2020/2021 with data from previous years where the British economy was more settled but one only has to consider the steep decline in the total number of hours worked from April 2020 onwards to see a troubling picture emerge.

'In essence there were fewer hours worked and yet more workers sadly lost their lives. The reason for this is unclear, it could potentially be due to new methods of working having to be swiftly introduced or it could be due to the pressures of the pandemic overshadowing traditional workplace safety matters.'

But even if the economic background was different – with furloughed workers turning to new occupations, or those displaced by redundancy joining the 'gig' economy – the causes of accidents were familiar. 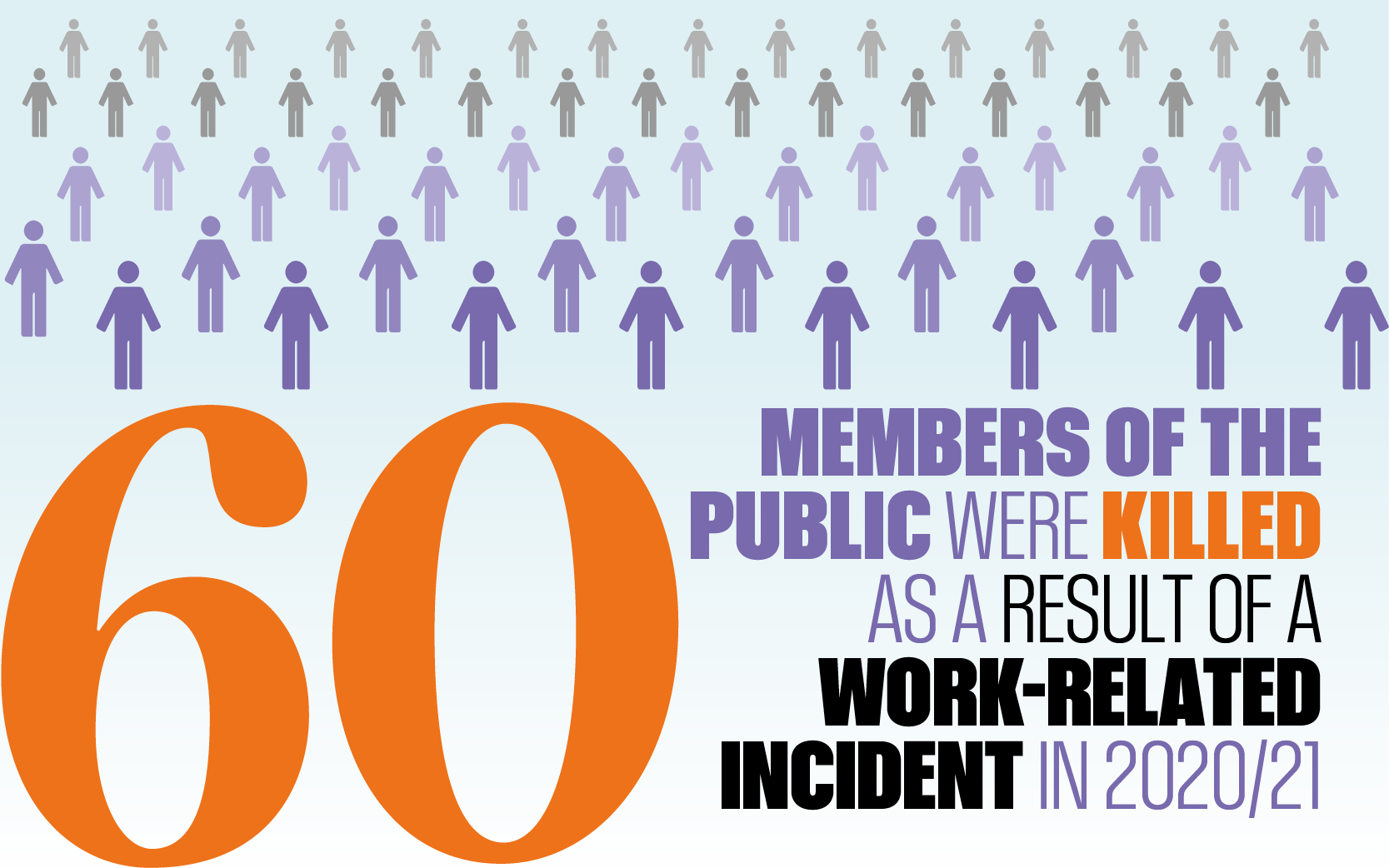 In terms of the number of fatalities per 100,000, the sector with the highest fatal injury rate was agriculture, forestry and fishing at 11.37 – a level that also shows a marked deterioration from the sector’s five year average rate of 8.44.

The waste and recycling recorded the second worst figure, at 2.57, but this represented a significant improvement on the five year average of 7.02. 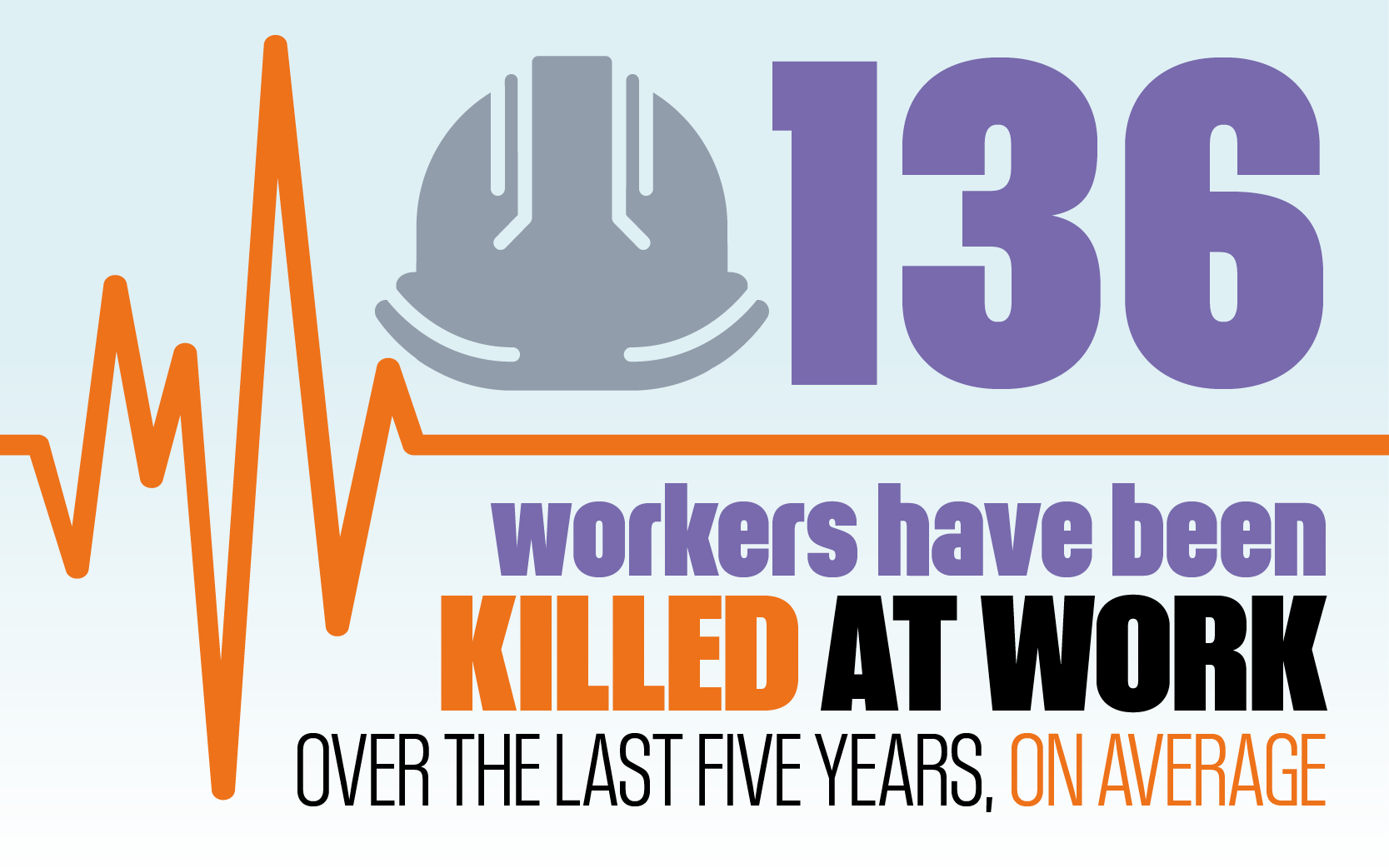 But the workforce calculation figures include those who were temporarily furloughed, and so over-estimate the number of workers actually 'at work', suggesting that the rate per 100,000 active workers would be higher than the reported figure.

Recognising this, the HSE also offers an alternative measure that looks at the fatality rate per 100 million hours worked: here, standardising against last year’s figures shows a greater percentage increase in fatalities between 2019/20 and 2020/21 of 40%.

However, the regulator argues that both measures, when viewed against the levels recorded in the recent past, indicate a 'generally broadly flat fatal injury rate in recent years'.

Forty-one of the 142 deaths, or 30% of the total, were to workers aged 60 and over. As this group makes up just 11% of the total workforce, the figures again underline the association between older workers and fatal risk.

But Covid may have brought one unexpected upside: the toll of deaths among members of the public linked to work activities was noticeable lower, with 60 killed in work-related incidents in 2020/21 compared to 92 the previous year. 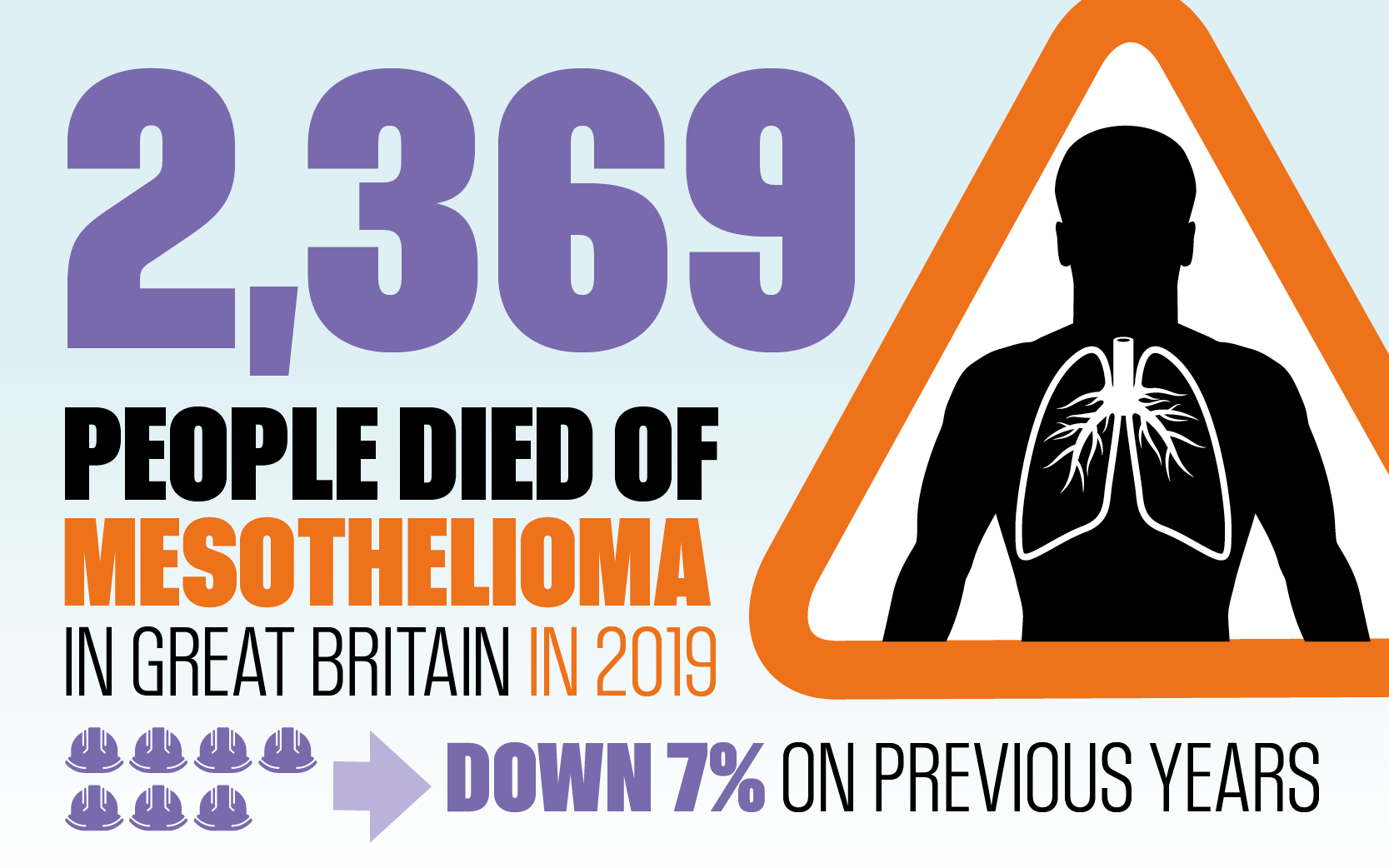 According to the HSE, this statistically significant drop 'almost certainly reflects the lockdown restrictions in place on the British public over the course of the year'.

The statistics exclude deaths from occupational diseases or linked to occupational exposures (including COVID-19), as well as fatal road accidents while working or commuting, and fatal accidents among workers who were travelling by air or sea.

Anna added: 'It is also noteworthy that the headline figures only scratch the surface in terms of the overall numbers of workers who lose their lives as a result of being at work. The figures exclude for example deaths from occupational diseases, the armed forces, accidents on the public highway and incidents which occur in the air or at sea.

'Had the number of occupational exposure related Covid-19 deaths been included within the HSE’s latest statistics the overall figures would have been markedly higher.'

With confirmation that all remaining restrictions will be eased in England from Monday, IOSH has called for caution around the return to workplaces.