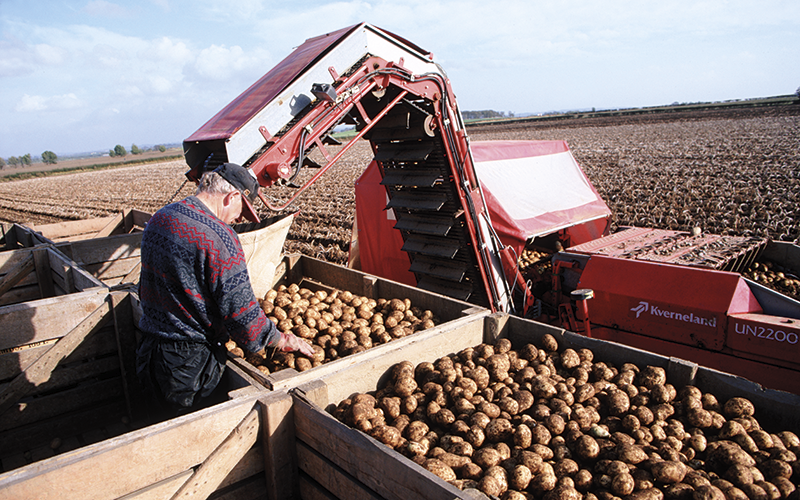 Agriculture is one of the most hazardous industries in the world. Latest GB figure have revealed a spike in fatalities in an industry renowned for its under-reporting.

In April this year, 21-year-old farmer Caroline Rennie was found dead in a field in Aberdeenshire following an accident with a tractor and seed drill. This tragic fatality, which is being investigated by the GB Health and Safety Executive (HSE), reminds us why agriculture, forestry and fishing is the most dangerous sector to work in, with a rate of fatal injury 18 times higher than the average rate across all industries.

However, in 2019-20, the number of deaths fell to an all-time low: 21. Cautiously welcomed by industry commentators, the HSE figures hinted that progress in growing a positive safety culture across one of Britain’s most hard-to-reach industries was bearing fruit.

But an article in Farmers Weekly in April suggests that the 2020-21 statistics, due in mid-July, could be one of the worst in 25 years, with as many as 50 deaths recorded. This will be a depressing development, not least because relentless HSE compliance visits and cross-industry campaigns had steadily brought the death toll down. 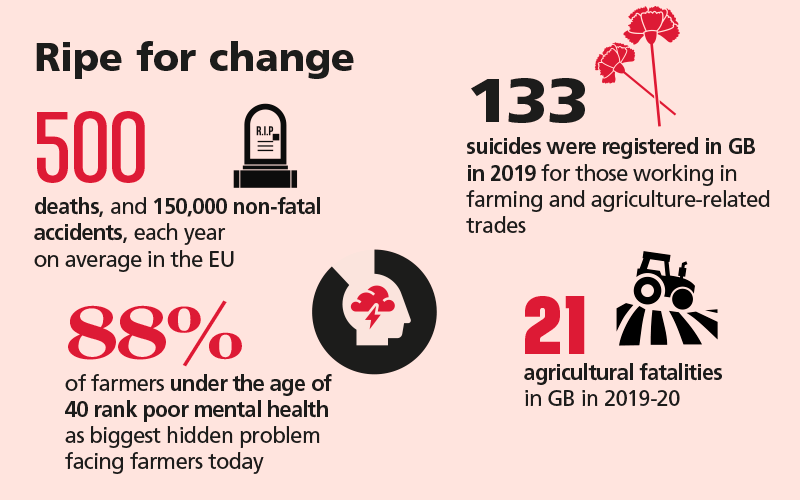 As Alan Plom, rural safety expert, notes, the safety message clearly hasn’t got through because the leading causes of accidents – workplace transport, falls from height and handling livestock – haven’t changed.

‘We have said, countless times, if farmers followed the various UK regulators’ guidance, there wouldn’t be any fatalities because they all start with risk assessments and cover all the basics,’ he says. ‘People don’t find innovative ways to kill themselves – it’s the same causes.’

It is for this reason that the Farm Safety Foundation’s annual Farm Safety Week, from 19 to 23 July, will go back to basics.

‘There needs to be a fundamental re-examination of risk and how farmers are perceiving it,’ says Stephanie Berkeley, the foundation’s manager.

A reassessment is important because the risks can change daily. Farmers are extremely capable at juggling multiple demands, but tasks often need to be completed within short timeframes, and the person working the farm is reliant on themselves to meet these deadlines. This can foster complacency and risky behaviours.

‘Farmers are facing so many unique stressors – the weather, market fluctuations for produce and time constraints during harvesting,’ says Stephanie. ‘They are also isolated, often working 16-hour days and maybe not speaking to another human for long periods.’

HSE principal inspector Wayne Owen says: ‘Although the industry accounts for around 1% of the GB workforce, it accounts for 20% of worker deaths.’

Using ‘segmentation’ research carried out by technology solutions firm Insight, the HSE categorises farmers in four groups: planners, pragmatists, risk-takers and ‘the unclear’, so that its interventions are more effective.

The regulator runs agricultural compliance events (ACEs), and some of the farmers receive a follow-up visit to confirm what they have learned. As the risk-takers and the unclear are responsible for the highest proportion of accidents, they have become the main focus of ACEs. However, during lockdown, face-to-face contact with farmers hasn’t always been possible.

Tina Morgan CMIOSH, chair of IOSH’s Rural Industries Group, says COVID-19’s impact on the availability of ‘sufficient workers who are competent, confident and qualified to do the work’ could be one of the factors behind the rise in fatal notifications.

Then there is the virus’s impact on training provision. ‘Trainers and OSH professionals would normally go and help farmers to write risk assessments, deliver training and help them with employee inductions but they haven’t been able to get out,’ she adds.

During the lockdown, farmers, who were classed as essential workers, carried on as usual. Unfortunately, support services such as machinery and equipment inspectors/repairers weren’t always available, which could have contributed to some of the related accidents, says Tina. ‘It is inexcusable to go out with a vehicle or use equipment that is not fit for purpose, but there is some sympathy when other service providers haven’t been there.’

However, UK agriculture is not alone in topping the most hazardous industries table. In Europe and around the world, there is a similarly poor health and safety record.

The European Agency for Safety and Health at Work’s (EU-OSHA) 2020 Review of the future of agriculture and occupational safety and health reveals that over the past 10 years, the EU’s agriculture and forestry sector has accounted for around 500 deaths, and 150,000 non-fatal accidents, each year (see Resources, below).

The International Social Security Association (ISSA) ranks agriculture as one of the three most hazardous in the global economy, while the International Labour Organization (ILO) estimates that, worldwide, the sector accounts for around 330,000 fatal accidents every year.

However, the real figure is much higher due to wide-scale under-reporting. The number of deaths in the EU could be four times higher than the published data, according to research cited in the EU-OSHA report.

The reporting of fatalities and accidents to the EU’s reporting system Eurostat is not mandatory for the self-employed, who make up the majority of the agricultural workforce. It also excludes irregular or temporary workers, retirees and family members.

‘I know of a case where the ambulance service called the police who then notified the HSE,’ says Tina. ‘Had that not happened in this way, the accident would not have been reported because it was a family member.’ 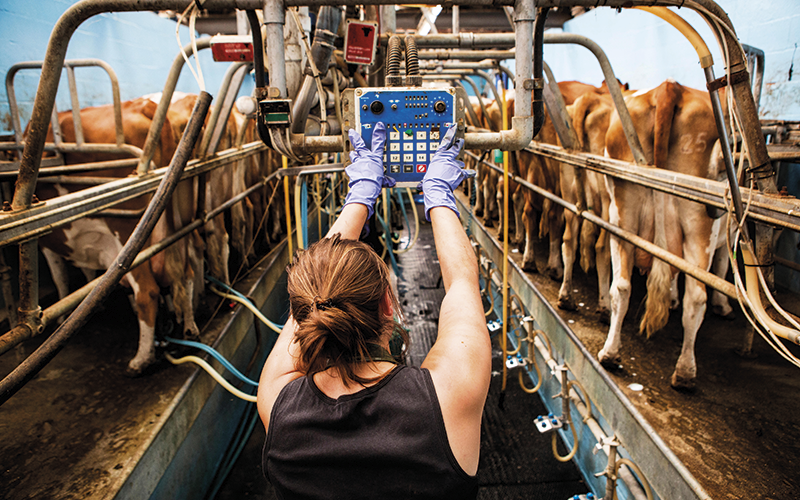 Internationally, it is a similar picture. To raise awareness of the risks and promote effective management and control, the ILO produced an agricultural safety code of practice in 2011 (see Resources).

More recently, ISSA has published two guides to support its Vision Zero strategy. The international body’s promotion of good practices and innovative solutions will be highlighted in ‘Safety Culture in Farming: Growing from generation to generation’, a special symposium at the World Congress on Safety and Health at Work’s online conference on 20 to 23 September.

Alan represented IOSH and spoke at ISSA’s conference on agricultural safety in Cordoba, Spain, in 2019, when the guides were launched. He welcomes the principles behind the Vision Zero strategy, but argues that more effective ways to communicate and influence farmers ‘in the field’ are needed. ‘The trouble is that many farmers have zero vision, certainly of the consequences,’ he says.

‘Farmers are not a homogenous group. Managers and OSH professionals have got to improve their effectiveness and get the messages over in the right way.’

Alan would like to see funding to translate the HSE’s Insight research behind the HSE’s categorisation of farmers into a tool that OSH professionals could use to influence different audiences.

He also recommends research carried out by Dr Amy Irwin at Aberdeen University on behavioural analysis and farmers’ attitudes to risk (see Resources).

Tina Morgan has been speaking to Lantra, one of the leading awarding bodies for land-based industries in the UK and the Republic of Ireland, as it currently delivers the HSE’s ACEs.

‘We should have farm mentors where a farmer who has been proven to have a successful farm with good practices and a positive attitude to safety can work with other farmers,’ she says. ‘There should be a funded nationwide farm mentoring scheme where farmers can contact identified mentors to help them with farm safety. Farmers listen to farmers.’

Tina also commends the approach taken by the Irish-based farm safety educational platform AgriKids, which targets young children, and adds that agriculture health and safety should be part of the curriculum in all rural schools. She would also like to see farm safety embedded into courses at agricultural colleges: ‘That’s where the OSH professionals need to be looking to get their influence.’

IOSH supports the Vision Zero strategy but Tina says there needs to be complete buy-in from every part of the industry. She would welcome an all-party parliamentary group on agriculture fatalities to focus minds.

‘With the best will in the world, everybody has been working separately and individually to push change and it’s not making a big enough difference,’ she says. ‘It needs to be a full approach, from manufacturers to suppliers, from trainers to consultants and through to enforcement. Advice is important but it needs to be enforced.’

As with the wider population, mental wellbeing has risen in prominence as an issue and exacerbated by the current pandemic.

In February, the Farm Safety Foundation (also known as Yellow Wellies) launched its fourth annual Mind Your Head campaign to raise awareness of mental ill health. The event was timely as recent statistics revealed there had been 133 suicides in Great Britain in 2019 relating to those working in farming and agriculture-related trades.

You are the liability

The foundation has undertaken research over the past six years, polling 450 young farmers on their views.

‘Two years ago, 80% said that mental ill health was the biggest hidden danger in farming but that’s jumped to 88%,’ says Stephanie, who has penned The Little Book of Minding Your Head to raise awareness.

‘Eighty-five per cent have said there is a link between mental health and farm safety. You have got to understand that if you are not in the right head space when you are about to do a job, then it’s not the machinery that is the most dangerous, it’s you that is the liability.’

Farm safety has no borders and new innovation approaches with an international reach can be invaluable to help spread good practice.

Elizabeth Creed, farm safety consultant and vice-chair of IOSH’s Rural Industries Group, came up with one such idea that she launched on Twitter in April.

Designed to change attitudes and save lives, #FarmSafetyHour is a weekly, one-hour discussion forum that has a reach of 1.8 million international followers, including in Australasia and West Africa. Engagement levels have been so high that Elizabeth is planning a newsletter and website.

‘Although there have been some great campaign weeks and farmers do take a lot from them, it’s very easy to fall back into what they’ve always been doing,’ she says on the idea behind Farm Safety Hour.

‘Even if they don’t have any time in the week to think about safety, they know that at 7.30pm every Thursday, there’s something on Twitter all year long that they can dip into. They can take what’s discussed and look at how they can implement it in their business.’

The anticipated spike in fatalities in the HSE’s forthcoming annual statistics is a reminder that the sector cannot afford to take its eye off the ball. Despite pandemic restrictions, a concerted effort by all stakeholders is critical to reverse the upswing in deaths and to reiterate the importance of safe working practices. 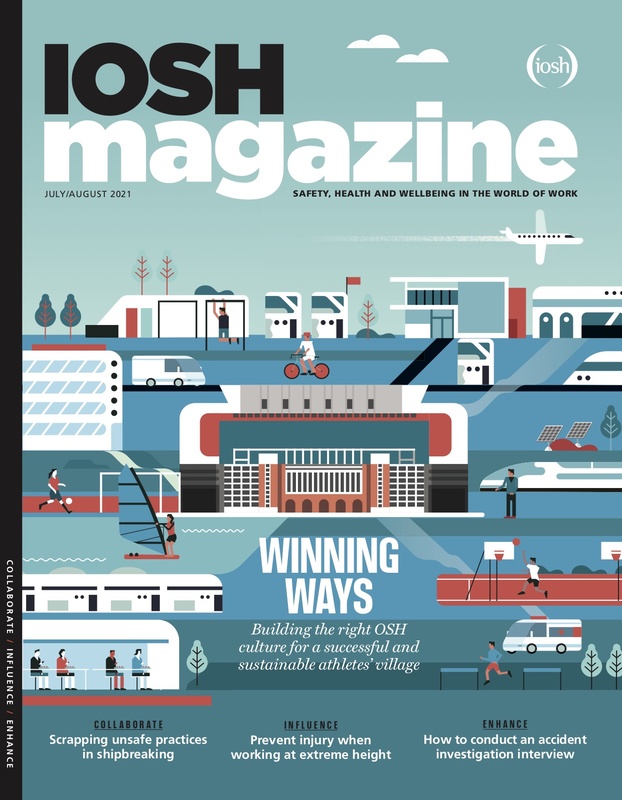 This article appeared in our July/August 2021 issue of IOSH Magazine.
Click here to view this issue
Topics:
News
Agriculture and forestry