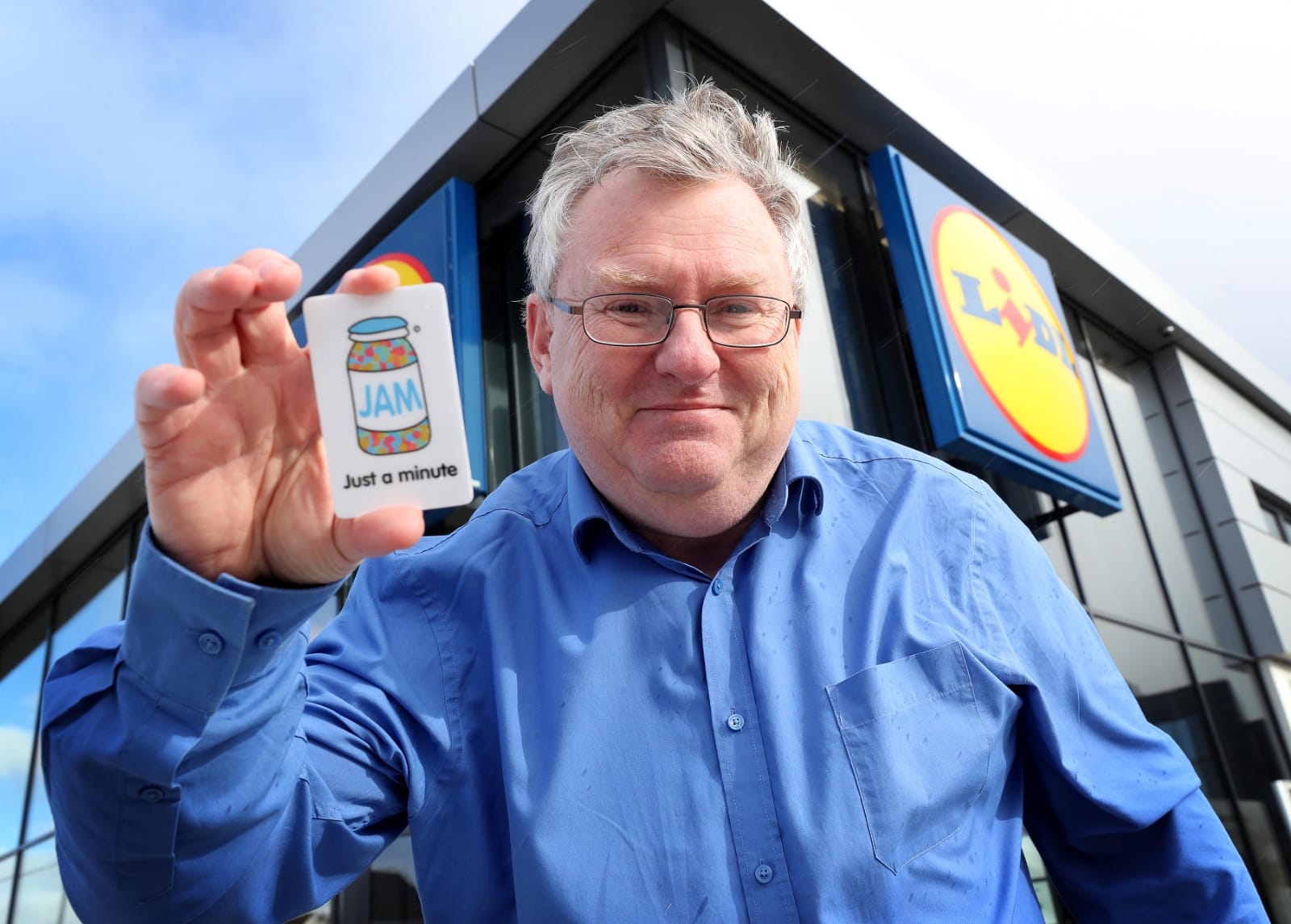 IOSH vice president Ciarán Delaney explains the role he has played in the adoption of an innovative scheme created to help people with invisible disabilities cope with the hurdles of daily life.

Sometimes, disabilities simply can’t be seen. And sometimes, all people need is a little time and space. These two truisms have been combined in one simple but ingenious project that seeks to help people with behavioural, communication or learning disabilities cope with daily activities across the island of Ireland.

JAM Card – which stands for ‘Just A Minute’ – is increasingly being recognised throughout Irish society as a way for those with invisible disabilities to cope better in potentially taxing situations. Created and designed from start to finish by the service users of the Now Group – a Northern Ireland-based organisation that supports people with learning difficulties and autism – the scheme ensures that, whenever it is presented, supporting businesses have trained staff on hand to help to provide the JAM card holder with extra assistance or time.

JAM Card was originally developed to help people with learning difficulties and disabilities negotiate public transport. However, other organisations have also embraced the concept and JAM Card – either in the form of a plastic card or a mobile device app – is recognised by an ever-increasing range of public and private sector bodies.

One man who has played a role spreading the message of JAM Card, and who is both a Now Group ambassador and a long-standing champion of disabled people’s rights, is IOSH vice president Ciarán Delaney. For Ciarán, the issues that JAM Card seeks to address have a direct and very personal relevance.

'I was at University College Cork and my interpersonal abilities were not the greatest. The university developed a programme called Life Matters, which allowed people to attend a course to get help with their social skills. There was also a psychologist on the course, who would attempt to identify if there were any underlying issues,' Ciarán says.

'Before the diagnosis, I often felt like I was bobbing along in the sea in pitch black conditions. But after, it was as if somebody had suddenly switched on a lighthouse'

'About four or five weeks into the course, the psychologist asked me to stay back. She told me that she thought I might have something called Asperger’s Syndrome. She asked if I’d be happy to have a test, so 30 minutes later I was on the other side of the campus being tested; and less than two hours later a lady in the disability support services was telling me I was on the autistic spectrum.'

While such a diagnosis can come as a significant shock and worry to some, for Ciarán it was actually something of a relief.

'Before the diagnosis, I often felt like I was bobbing along in the sea in pitch black conditions. But after, it was as if somebody had suddenly switched on a lighthouse,' Ciarán says.

As a result of his diagnosis, Ciarán started becoming interested in autism but in 2015 he had a mini stroke, which had an impact on his mobility. That, in its own way had an element of fortune to it because Ciarán subsequently found himself in meetings with people talking about disability. Through contacts he made at these, Ciarán became a voluntary parliamentary researcher in the Seanad Éireann – which is upper house in the Irish Parliament.

'From there, I was invited to attend a meeting with the then Minister for Transport, Shane Ross,' Ciarán says. 'We were in a meeting where I was listening to a whole load of waffle and I said, "Minister, I think you’re missing a trick. Why don’t you appoint real disabled people to the board of state transport companies?" He seized upon it immediately and the rest is history.

'That was the main problem we faced – mobility-impaired people couldn’t access trains or buses easily and those with visual impairments had to ask others when the next stop was. There were also no provisions made as to how on-board announcements could be made accessible for the deaf community.

'As a result of that meeting, we now have a visually impaired person on the board of Dublin Bus; we have a wheelchair user on the board of Irish Rail, there are other disabled people on the boards of Bus Éireann – which covers the rest of the Republic of Ireland - and the National Transport Authority; and we have a Paralympian on the board of Sport Ireland. So we’ve actually got people with disabilities on state boards with full voting rights.'

Despite his involvement in disability and public transport in the Republic of Ireland, it was only during a journey in Northern Ireland that Ciarán originally spotted a sign for JAM Card on a Translink bus and decided to investigate further.

'I reached out to the Now Group, and met Diane Hill in the Bobbin Café in Belfast City Hall, where they run a catering business. I offered to use my connections within the Irish parliament and transport sector to try and get the JAM card introduced in the Republic of Ireland,' Ciarán says.

Ciarán then organised meetings with key stakeholders in the Irish parliament, one of them being Fergus O’Dowd TD who was the chair of the National Transport Authority. There was one potential obstacle to the introduction of the JAM card, which was potential union opposition, so Ciarán also met with Dermot O’Leary, General Secretary of the National Bus and Rail Union, who was in the middle of an industrial relations process.

'People who have Asperger’s believe in process. We can look at things from start to finish and develop a better feel for the process'

Ciarán persuaded him to use ‘Disability Accessibility’ as part of the union’s strategy, and asked for a commitment that the union would not seek payment for the use of hydraulic equipment to aid mobility impaired people to board buses or for their members to recognise the JAM card. Dermot gave an immediate commitment that removed any industrial relations angles that the companies or regulators may have been tempted to use.

'Then, because of the work I was doing and the connections I had developed within both Houses of Parliament, the Oireachtas Joint Committee for Transport, Tourism and Sport agreed to hold a series of hearings entitled "Accessibility to public transport for people with disabilities". The culmination of these hearings was the publication of a report which set out 16 key recommendations,' Ciarán says.

One of Ciarán’s proudest moments was when the chair of the Oireachtas Joint Committee for Transport, Tourism and Sport, Fergus O’Dowd, mentioned him in his summing up of the motion to ratify the report in the Dáil in February 2019.

'I thank Mr O'Leary in particular and his colleagues, as well as Mr Ciarán Delaney. I left Ciarán until last because he is probably the most important person who we meet in the House. He is forever and always articulating, fighting for, supporting and trying to get change for people with disabilities. He personifies the importance of advocacy. That is what makes those of us who are politicians do things differently,' Mr O’Dowd said.

Following this, the National Bus and Rail Union presented Ciarán with their inaugural NBRU/Jennifer Forde Award for services to the disability sector. He is now a member of the NBRU disability committee and organised the disability element of their most recent biennial conference, where the three chief executives of the main transport companies attended and spoke of their commitment to inclusive, accessible services.

Meanwhile, the success of JAM Card grows apace. It is now available on Irish Rail and all transport providers that are regulated by the NTA. It’s promoted in the Bank of Ireland and Allied Irish Banks. And now Lidl in both Northern Ireland and the Republic have rolled out the JAM Card scheme in the last month.

'In fact, Lidl has gone an extra mile,' Ciarán says. 'Not only has it introduced JAM Card and given staff online training, but as a result of us talking to them, they are also reviewing their employment and recruitment processes to encourage and empower disabled people to seek a career within their organisation.'

That latest step is particularly important because Ciarán believes many disabilities should be seen less as a hindrance to finding work, and more as a ‘super power’ – to quote the new chair of the IOSH Board of Trustees, Dr Peter Bonfield – that could make people uniquely suited to certain jobs, not least health and safety.

'I’m the first openly disabled person to become a vice president of IOSH. But people who have invisible disabilities also have abilities. For example, somebody with a disability like mine, if they have an interest in a topic and you brief them well, then stand back and let them get on with it because you may well get far better output than you would do from what’s termed a "neuro-typical" person,' Ciarán says.

“I always had an interest in safety but I always felt I wasn’t clever enough to do it. My wife told me in no uncertain terms that I could do it, so I signed up to a course run by University Dublin in the late 1990s. Since then, I have studied at University College Cork and now I have a number of diplomas ranging from health and safety, to work-based learning and training as well as environmental science and social policy.

'People who have Asperger’s believe in process. We can look at things from start to finish and develop a better feel for the process. Then, if we have a good level of confidence in our understanding and we ask the right questions to reaffirm or correct our understanding, when we engage with other people about the process they can see that we aren’t trying to bluff our way. We really go into the minutiae of things so we really know what we’re doing.

'I believe that, instead of concentrating on disabilities, if employers focused on people’s abilities, they could find that their disabled employees can achieve things that they never thought possible.'

Find out more about the JAM card initiative here.

The IOSH Logistics and Retail Group will shortly be hosting a webinar, which will cover the JAM initiative. More information will be published here.