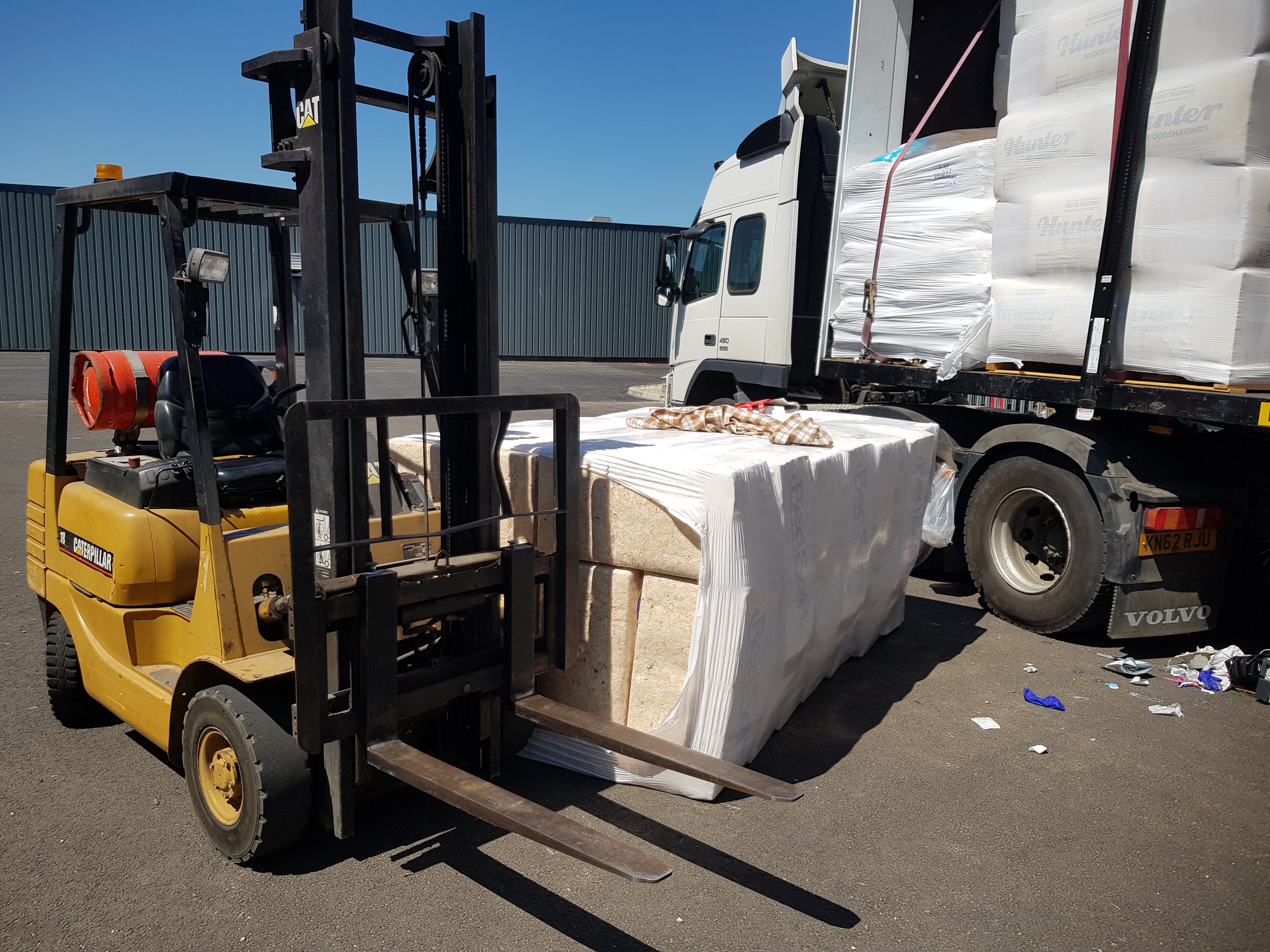 A director who lied about how a lorry driver sustained life-changing injuries has been ordered to carry out 200 hours of community service.

Richard Ellwood, owner of Dickies Pet Centre in King's Lynn, Norfolk, misled his insurer following an incident in which a delivery driver was left paralysed.

On 25 June 2018, a palleted load of pet bedding (pictured above) was being unloaded from a delivery lorry by a forklift truck driven by Ellwood. He lifted the load with its lifting forks too closely together, meaning they went into the wrong apertures in the pallet and could not support the load properly.

He then manoeuvred the truck with the forks still raised, and the load – which weighed more than 800kg and was 2.5 metres tall – fell onto the lorry driver.

The driver sustained fractures to his neck vertebrae which means he cannot move from the neck down, and has a permanent need for 24-hour care to assist him with everyday tasks, even breathing. As a result, his life expectancy has been reduced.

Investigators from West Norfolk Council told Chelmsford Magistrates’ Court that the company had not assessed the risks, did not have a safe system of work for the unloading of delivery vehicles, Ellwood had not been trained in the operation of forklift trucks since 2005, and Dickies Pet Centre's forklift truck had long been operated without access to any copy of the manufacturer's manual.

In the aftermath of the incident, Ellwood told his insurer’s independent safety investigator that the load had fallen because the pallet had broken. Later he told a different story, also blaming the pallet, while still concealing the misplacement of the forks.

District Judge King said that the provision of this inaccurate information aggravated his and his company’s offending and increased the sentences passed upon each of them.

The defence accepted that Ellwood had acted dishonestly during the investigation, and said that whilst he did not set out to cause an accident or injury, it was accepted that his actions, or lack of actions, led to the injury to the lorry driver.

Dickies Pet Centre had previously pleaded guilty to an offence, contrary to section 33(1)(a) of the Health and Safety at Work Act, of failing to fulfil its duty under section 3(1) of the Act to ensure those it did not employ were not exposed to risk by the way it ran its business.

Ellwood had previously pleaded guilty to an offence, contrary to section 33(1) and section 37(1) of the Act, of being a director who consented to or connived in the company's offence, or to whose neglect that offending was attributable.

Because of his early guilty plea, the Judge gave him credit by way of not imprisoning him, and sentenced him instead to a 12-month Community Order with a 200-hour unpaid work requirement.

Dickies Pet Centre’s fine was also reduced because of its plea, but its high culpability, the fact that the most serious level of harm was risked and was visited on by the lorry driver by this offending, and the aggravation of the inaccurate information, meant that even so, and taking into account that it was a very small company with no previous health and safety breaches, the fine was £115,000.

The company was also ordered to pay the more than £70,000 costs of the investigation, which the Judge said was much more extensive than it needed have been had the inaccurate information not been given.