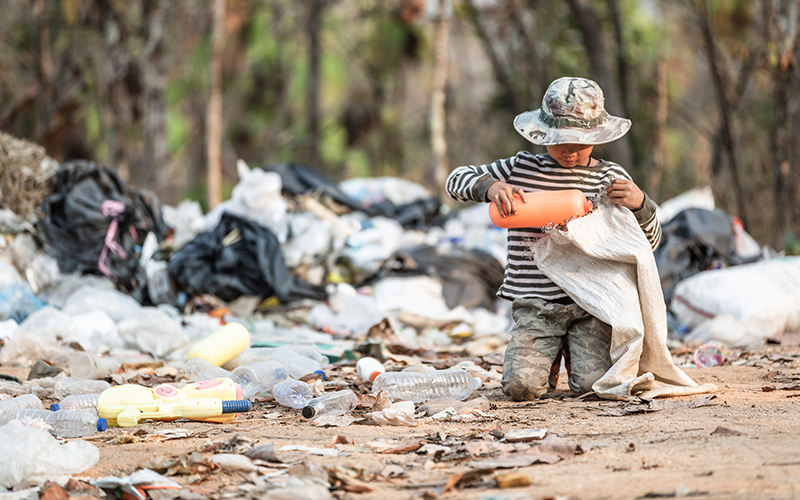 Child labour has risen to 160 million, the first increase in two decades, warns a joint report from the International Labour Organization (ILO) and UNICEF.

Child Labour: Global estimates 2020, trends and the road ahead, published today (10 June) reveals that the numbers worldwide have increased by 8.4 million in the past four years. Millions more children are at risk due to the impacts of COVID-19, the authors add.

Published two days before World Day Against Child Labour on 12 June, the first-ever joint ILO-UNICEF report on this issue suggests that the downward trend that saw child labour fall by 94 million between 2000 and 2016 is stalling and may even be heading into reverse.

The findings throw doubt on whether the United Nations’ ambition for achieving its Sustainable Development Goal 8.7 – to end all forms of child labour by 2025 – can be realised.

Among the report’s headline findings is the disturbing, and significant, rise in the number of children aged five to 11 years employed in child labour. This young age group now accounts for slightly more than half of the total global figure.

In contrast, child labour among children aged 12 to 14 and 15 to 17 declined in percentage and absolute terms, continuing a consistent downward trend.

The authors note that the number of children aged five to 17 years who are undertaking hazardous work – defined as work that is likely to harm their health, safety or morals – has soared to 79 million, a rise of 6.5 million in absolute terms since 2016.

The latest global estimates indicate that 63 million girls and 97 million boys were in child labour globally by early 2020, accounting for almost one in 10 of all children worldwide.

In every age group, child labour is more prevalent among boys than girls. However, when household chores for 21 hours or more each week is factored in, the gender gap in child labour narrows.

The agricultural sector is by far the largest employer of child labour, according to the report, accounting for 70% of the total workforce (112 million). Not surprisingly given this statistic, the prevalence of child labour in rural areas is almost three times that found in urban areas.

The authors also analysed the rise in child labour in different regions and the impact that the pandemic has had on the numbers of children put at risk.

In sub-Saharan Africa, the authors point to an additional 16.6 million children employed in this activity over the past four years, which they say has been caused by a number of contributory factors – population growth, recurrent crises, extreme poverty, and inadequate social protection measures.

There are now more children in child labour in sub-Saharan Africa than the rest of the world combined, the authors note.

However, even in regions such as Asia and the Pacific, and Latin America and Caribbean, where historical efforts had reduced the child labour figures, progress has been stalling due to the impact of COVID-19.

The authors estimate that nine million additional children could be pushed into child labour by the end of 2022 as a result of the pandemic.

Using a simulation model, they warn that this figure could be as high as 46 million if children do not have access to critical social protection coverage.

The pandemic’s impact on economies and school closures has also been highlighted.

The authors warn that children who are already in child labour may be working longer hours or under worsening conditions.

In addition, many others may be forced to undertake the worst forms of child labour because of job and income losses among vulnerable families. These entail all forms of slavery or practices similar to slavery, such as the sale and trafficking of children, debt bondage and serfdom, and forced or compulsory labour.

‘We are losing ground in the fight against child labour, and the last year has not made that fight any easier,’ warned UNICEF executive director Henrietta Fore.

The ILO and UNICEF have urged governments and international development banks to prioritise investment in programmes that remove children from the workforce and ensure they are being schooled.

They have also called for investment in social protection programmes and the promotion of decent work for adults, so that families do not have to send children to work and generate income for the family.

The joint ILO-UNICEF report, which is based on data extrapolated from more than 100 national household surveys and covers two thirds of the world’s population of children aged five to 17 years, makes a number of recommendations, notably the provision of social protection for all, including universal child benefits.

The authors note that a rise in social protection coverage could more than offset the impact of COVID-19 on child labour, and reverse the latest trend.

The ILO and UNICEF are also calling for increased spending on free and good-quality schooling and getting all children, including those who were removed from school before the pandemic, back in the classroom.

Interventions particularly in rural areas and the agriculture sector are critical. These include investing in child protection systems, agricultural development, rural public services, infrastructure and livelihoods.

As part of the International Year for the Elimination of Child Labour, the global partnership Alliance 8.7 of which the ILO and UNICEF are partners, is calling on governments, businesses, trade unions, civil society, and regional and international organisations to make concrete pledges to eliminate child labour.

During a week of action from 10-17 June, the ILO and UNICEF will work with other high-level stakeholders and youth advocates at the International Labour Conference to discuss future actions.

Govt to pilot car wash accreditation to stamp out slavery