Grenfell TMO scored 1 out of 5 in external audit, Inquiry told 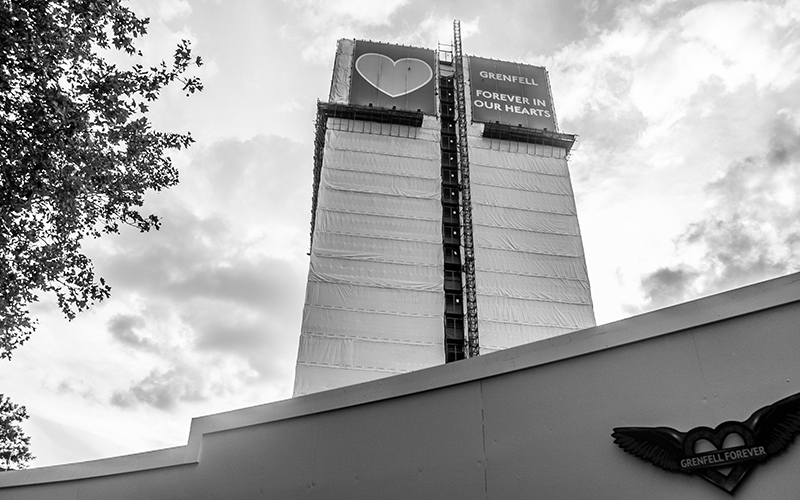 The Tenant Management Organisation that ran Grenfell Tower struggled to get a grip on the management of fire safety and health and safety, leading to three critical audits and two notices served by London Fire Brigade, it emerged this week at the Grenfell Tower Inquiry.

Questioning of Sacha Jevans, executive director of operations at the Kensington and Chelsea Tenant Management Organisation (TMO), revealed that the organisation spent 2013 to 2017 trying to clear a backlog of fire risk assessment actions, and that its in-house maintenance arm was given a 'one out of five' score on health and safety training in an external audit.

The evidence sessions also revealed that London Fire Brigade had urged the TMO to fit self-closers to all internal doors across its 9,000-home property portfolio, after an October 2015 fire at one of its high rise blocks – Adair Tower – highlighted how their absence increased the internal spread of smoke.

But despite meetings with the LFB, the TMO did not agree the works programme.

On the night of the Grenfell blaze, on 14 June 2017, lack of door-closers was one factor that led to fatal smoke filling flats and corridors.

Jevans told the Inquiry that she was a director of the TMO’s in-house contractor, Repairs Direct, a role that involved oversight of its health and safety performance, and also had a general duty to ensure health and safety standards across the four directorates that reported to her.

The organisation failed to draw up personal emergency evacuation plans (PEEPs) for disabled or vulnerable residents of Grenfell Tower, instead placing their faith in LFB's 'stay put' policy

,000 outstanding FRA actions that had accumulated after two maintenance contractors, Connaught and Morrison, went out of business. A TMO board meeting in 2012 had identified the backlog as a 'reputational risk' if there was a fire.

But with repairs now in-house under the management of Repairs Direct, this grew to reach more 2,300 in September 2015 and 5,400 by January 2017. In June 2017, the TMO was still addressing the issue, with the Inquiry hearing that split corporate responsibility for the action points frustrated progress.

The backlog had also been flagged by a March 2013 internal audit by the Royal Borough of Kensington and Chelsea, which found only 'limited assurance that adequate controls and processes are in place for health and safety'.

It also recommended establishing a rigorous KPI system to track progress, although this was not in fact implemented until 2016. In response to the council’s internal audit, the TMO also commissioned health and safety consultant Matt Hodgson to review its processes and advise it on best practice. By July 2013, Hodgson had drawn up a catalogue of shortcomings and 39 recommendations.

Problems included a 'shortfall of compliance data' to use as the basis of decisions, a 'lack of focus and leadership in making important changes' and lack of clarity on roles and accountability.

'Different risk areas sit within different departments, not because the decision was made at committee, more through default,' Hodgson’s report said.

A second audit in December 2014, by Rob Anderson of RHSS and focusing on health and safety systems at Repair Direct, identified gaps between policy and practice, and gave the organisation a score of 40 out of 100 overall and one out five for health and safety training.

In October 2015, the London Fire Brigade (LFB) issued a 'deficiency notice' over the lack of automatic door closers at Adair Tower, also managed by the TMO. Three weeks later, fire broke out at the tower block.

Following this, the LFB urged the TMO to fit door-closers across its portfolio, but the Asset and Regeneration division declined to take action, citing budget pressures.

'The combustibility of these panels was, in my opinion, well known in the industry'

In November 2016, an LFB inspection of Grenfell Tower led to a second LFB 'deficiency' notice that highlighted the lack of door-closers, internal doors not fitting their frames, storage of items in common parts and a breach of a service duct.

The TMO was given until 18 May 2017 to resolve the issue. However, with responsibility for actioning the deficiencies again split between four different TMO teams, the door-closers were still missing on the night of the fire.

Jevans followed several of TMO colleagues into the witness stand at the Inquiry.

Teresa Brown, former director of the neighbourhood management directorate at the TMO, last week admitted that the organisation had failed to draw up 'personal emergency evacuation plans' (PEEPs) for disabled or vulnerable residents of Grenfell Tower.

Because the vulnerable residents lived in 'regular housing', the TMO had placed its faith in London Fire Brigade’s 'stay put' policy rather than PEEPs, Brown said.

This decision stayed in place even vulnerable residents had been evacuated from two less serious fires, at Adair Tower in October 2015, and at Trellick Tower in April 2017.

Meanwhile, Siobhan Rumble, the TMO’s area manager for the Lancaster West estate, which included Grenfell Tower, gave evidence on the breakdown in communications and lack of trust between the TMO and Grenfell residents.

She described how evening meetings held to communicate plans around the refurbishment were suspended after they sparked confrontations with some residents, including those behind the Grenfell Action Group (GAG), set up in 2010.

'They were blogging about us, they were very rude, often inaccurate, it was really hard,' she told the inquiry.

Determining which representative body should speak on behalf of residents had been a vexed area, the inquiry heard, despite the fact that TMOs are 'tenant-led' and residents could have been elected to the board.

GAG member and Grenfell resident Edward Daffran, a former mental health social worker, told the inquiry that the TMO was an unaccountable 'mini-mafia' that prioritised profit and self-interest.

Seven months before the fire that claimed the lives of 72 people, Daffran co-wrote a GAG blog that predicted that only 'serious loss of life' would 'shine a light' on the TMO.

Last week, the inquiry also heard that construction professionals who specified combustible cladding panels on high rise residential projects in the period following of a spate of overseas cladding fires in 2012 to 2015 'fell below the expected standard'.

Façade engineer Jonathan Sakula was commissioned to report on 'the state of knowledge within the cladding industry during the period January 2012 to June 2017', and determine what 'acting with reasonable skill and care' might look like in an over-cladding project.

Sakula, formerly of Buro Happold and now an independent façade consultant, told the inquiry that 'the combustibility of these panels was, in my opinion, well known in the industry'.

According to law firm Burges Salmon, Sakula’s findings will be cited in multiple ongoing litigations where landlords and developers are claiming the cost of cladding replacements from design and construction teams.

Their defence has been that they used reasonable skill and care on projects, but Sakula’s evidence suggests that they breached a duty of care to clients and could be liable, according to Burges Salmon.

Last week also brought a stark reminder of the ongoing vulnerability of residents in high-rise buildings. A serious fire at a high rise development in Poplar, east London, where combustible ACM cladding panels were still in place after a four year wrangle with the developer over the costs of removal, saw flames extend externally via balconies from the eighth to the tenth floors.

Internal spread of smoke – documented in Twitter photos pictured above – meant that LFB had to carry out 35 rescues, with 22 using 'fire escape hoods'. Two men were treated in hospital for smoke inhalation, and a further 38 adults and four children were treated at the scene. One firefighter was injured.

According to reports, the building did not have sprinklers or a building-wide alarm system fitted, and the 'waking watch' team that residents had been paying for since 2017 failed to raise the alarm.

New Providence Wharf development was built in 2005 by develop Ballymore with ACM cladding covering approximately 22% of its façade.

The government agreed a grant of £8m to fund replacement works, but the work was still in its preparatory phases when the fire broke out.