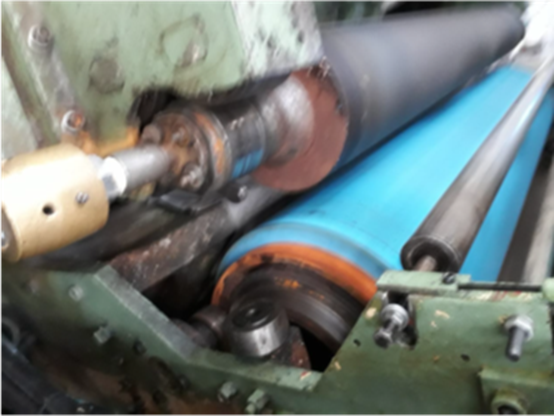 A plastic coatings manufacturer has been prosecuted after a worker had to have three fingers amputated when his hand was drawn into machinery.

On 20 August 2019, a machine operator was working on an embossing machine, known as a Briem machine, at Uniroyal Global's premises in Earby, Lancashire.

His hand became drawn into the nip point between two counter rotating rollers, known as the shell and the bole.

Manchester Magistrates' Court was told the shell roller needed to be kept at an ice-cold temperature, which was achieved by using water cooled from a chiller unit, situated outside the building.

There had been previous incidents of the chiller 'cutting out' which had made it custom and practice for the operators to check the temperature of the moving roller by hand. This resulted in the irreversible crush injuries to the man's right hand.

Health and Safety Executive (HSE) investigators found that there was insufficient guarding to the machine with at least four exposed nip points and a heavy reliance on training rather than engineering controls, such as fixed guarding.

'A number of unsafe practices were uncovered,' said HSE inspector Leona Cameron. 'This included unguarded access to the dangerous parts of the Briem machine, failings in maintenance and the quality of the risk assessment process in allowing an unsafe working practice to develop.'

Uniroyal Global pleaded guilty to breaching section 2(1) of the Health and Safety at Work Act. The company was fined £120,000 and ordered to pay costs of £5,462.

'The company had identified the risk of entanglement from in-running nips, but had chosen not to take practicable measures to prevent such risk,' Leona continued.

'If suitable guarding and robust maintenance procedures been in place, then the life changing injuries to the operative would not have occurred.'

Following the incident, the company undertook remedial measures to ensure machinery safety, including suitable guarding to prevent access to dangerous parts of the machine.