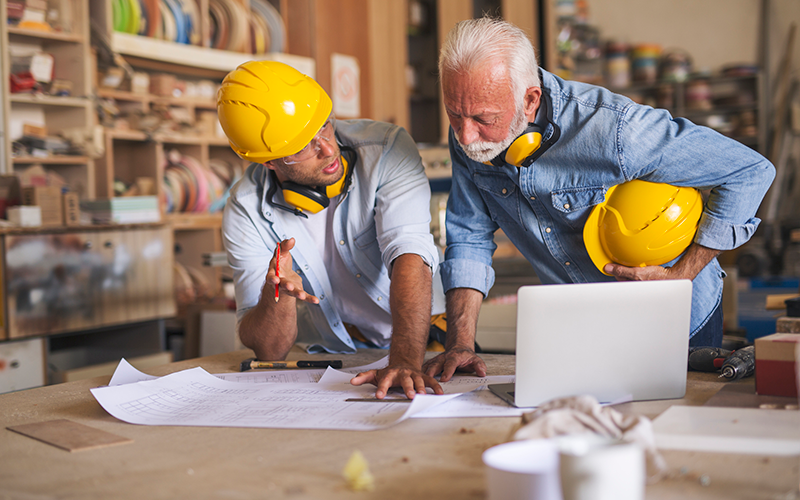 An international mental health programme is being trialled in SMEs across the construction, health and information and communication technology (ICT) sectors to evaluate its effectiveness in improving mental health and reducing depression and suicidal behaviour among workers.

The Mental Health Promotion and Intervention in Occupational Settings (MENTUPP) project is running the six-month pilot in Australia and eight European intervention countries, which will be followed by a large-scale trial from mid-2022.

Funded by the European Union’s Horizon 2020 research and innovation programme, the MENTUPP project brings together an international consortium of 17 partners in 14 countries who will develop, implement and evaluate a multi-level intervention tailored for each sector and also by gender.

Workers in SMEs across the three sectors were identified as having particularly poor mental health as well as having an elevated risk of suicide and reduced wellbeing.

According to Professor Ella Arensman, the project’s co-ordinator, the consortium recognised that there remained significant barriers around improving mental health, in particular in the construction, health and ICT sectors. International research findings going back to 2013, identified an increased risk of suicide in the construction and health sectors.

‘Regardless of the specific risk or causal factors, we knew from the dissemination of these worrying findings that stigma in relation to mental health was still really prevalent in the construction sector and paradoxically also in the health sector,’ she said.

Stigma, Professor Arensman added, was driven by different factors in the two sectors. In the health sector, she said, ‘there is still limited openness to communicate about mental health because there is that subtle expectation that the doctor or nurse cannot be ill’.

IOSH, which is on MENTUPP’s advisory panel, is supporting the recruitment drive by asking its members to contact MENTUPP’s project team

Although the consortium did not find the same patterns of increased risk of suicide in the ICT sector, it did find recurrent evidence of high levels of absenteeism and presentism in many of the participating countries.

Most of the partners in the MENTUPP project will be intervention countries while other partners will evaluate the project findings, she explained.

Drawing on the expertise of professionals in mental health, suicide prevention, depression, occupational health and other interdisciplinary fields, the consortium had spent the best part of 2020 adapting and integrating existing evidence-based interventions for non-clinical and clinical mental health issues to create a single, targeted programme.

‘The pilot study will be smaller-scale than the trial,' noted Professor Arensman. ‘Each of the intervention countries works with at least one SME. Three countries work with construction SMEs, three work with health SMEs and three with ICT SMEs.’

Representatives from the 17 partners will sit on steering groups in each of the intervention countries and evaluate the pilot’s effectiveness as well as assess the impact of cultural differences.

Professor Arensman told IOSH magazine that once the pilot is complete in late 2021, the consortium has five months to optimise the materials, taking into account the key learning points.

The consortium will then conduct a 13-month multi-country cluster randomised controlled trial, including follow-up from mid-2022 to assess the effectiveness of the revised programme among a larger target audience.

Recruitment for SMEs to take part in the trial will start later this year. IOSH, which is on MENTUPP’s advisory panel, is supporting the recruitment drive by asking its members who have contacts with SMEs in the relevant sectors and participating countries to contact MENTUPP’s project team.

The multi-level intervention includes a suite of practical tools aimed at managers, supervisors and employees that cover issues such as stress, depression and anxiety. The resources will be available to SMEs that participate in the trial through an online hub, which will then be made widely available to all SMEs once MENTUPP has concluded in 2023.

‘A blended approach of putting interventions in place with engaging SMEs seems to the most effective in terms of long-lasting outcomes,’ said Professor Arensman.

‘However, with COVID-19 we have been forced to transform all of our materials into online delivery, but we have made an effort to include some interactive components in the interventions.’

The consortium’s plan is to roll out a finalised intervention in new SMEs and countries from mid-2023, which will be promoted by policymakers, insurers, social partners, regulatory authorities and the general public at both European and global levels.

‘We first want to see how the MENTUUP intervention programme will be received in the construction, health and ICT sectors,’ explained Professor Arensman.

‘By 2023, we’d like to convey to the European Commission and all important stakeholders, what we can reliably say what works and doesn’t work in terms of improving mental health and also suicide prevention.’

MENTUPP held its first meeting in January 2020 just prior to the first lockdown and has spent the past 14 months preparing the intervention programme and consulting with the stakeholders in the different sectors across the 14 participating countries, which include Ireland, Germany, Belgium, Finland, The Netherlands, Spain, Denmark, England, Scotland, Hungary, Albania, Kosovo, the USA and Australia.