HSE grilled over its COVID response at Select Committee hearing 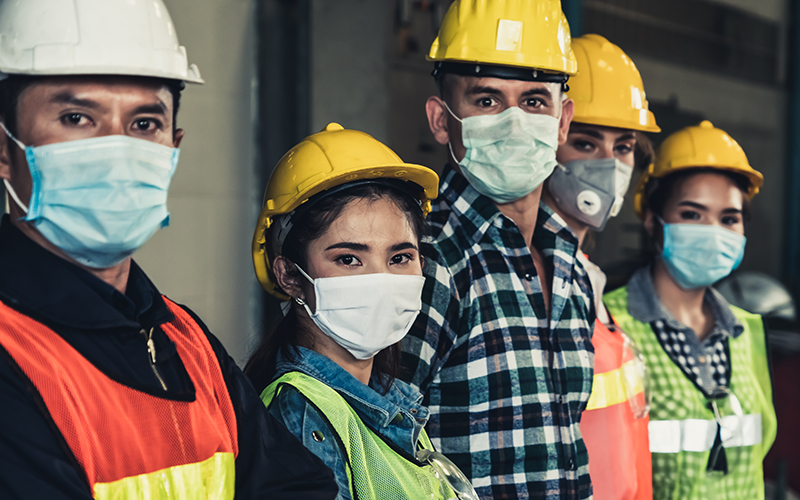 Unions and the UK Health and Safety Executive (HSE) leaders clashed over the enforcement of COVID guidance at work last week, as MPs on the Department of Work and Pensions Select Committee heard diametrically opposing views on the regulator's activities as the two sides gave their accounts of the last 12 months.

TUC deputy general secretary Paul Nowak argued that the HSE had been 'found wanting' during the pandemic, where around 14,500 people of working age had lost their lives but the HSE had issued just two prohibition notices over COVID failures, plus a quoted figure of 235 improvement notices.

In 2019/20, the HSE issued 1,800 prohibition notices and 5,000 improvement notices across all risks. Prospect general secretary Mike Clancy set the figures in the light of the HSE’s shrinking budget, telling the committee that the enforcement agency currently had just 390 full-time, warranted inspectors, while £14 million from the DWP budget assigned last May and ring-fenced for its COVID response was 'less than 10% of the funding that’s been cut' over the past decade.

'You can’t divorce the assessment of the HSE’s performance in the last year from the journey it’s been on in the previous ten years … it’s experienced a 54% real terms reduction in its funding,' Clancy told MPs.

Both unions argued that the HSE’s decision to categorise COVID-19 as a 'significant' occupational risk rather than a 'serious' one had dictated low enforcement levels.

The TUC also argued that there should have been a requirement for employers to publish their COVID risk assessments, with its own survey evidence finding that only half of workers were confident that their employer had carried out a risk assessment.

'It's the opposite of complacent; we really have turned the organisation on its head to respond to COVID'

But HSE chief executive Sarah Albon countered that its approach – which included hiring two firms of COVID 'spot checkers' to boost presence on the ground while also relying on the soft power of policy and guidance  – was broadly correct, with the relatively low number of notices explained by the fact that employers were far more aware of COVID-19 guidance than other workplace risks.

Senior HSE executives, union leaders and representatives of the construction and manufacturing sectors gave evidence to a non-inquiry session of the DWP Select Committee, set up to revisit the committee’s 2020 inquiry on the DWP’s COVID response but not necessarily to produce a report.

Commenting on the hearing, solicitor Rhian Greaves, director at Pannone Corporate, detected 'a clear disparity' between the perception of the regulator (and the industry representatives) and that of the unions, with polar opposite views on display.

'The former talked about businesses trying to do the right thing, implementing familiar control measures in the workplace and with some success; Sarah Albon indicating that the level of compliance with COVID measures had been ‘significantly better’ than is routinely the case with typical health and safety risks.

The union representatives however felt the ‘lived experience’ of their members had not been reflected in the level of enforcement action taken and that there was an absence of any ‘realistic chance of enforcement’.

Central to the debate was the regulator’s categorisation of COVID-19 as a 'significant' workplace health risk in its Enforcement Management Model (EMM) – a decision the HSE defended but Clancy described as 'failing to read the room of civic opinion' while Nowak said that it 'sends entirely the wrong message to employers across the country'.

The EMM is a 46-page guide to inspectors designed to standardise responses to workplace hazards, advising when to ‘engage’ employers and when to escalate to enforcement action.

The union representatives told the inquiry this limited inspectors’ ability to enforce, and failed to create a deterrent effect. 'The reality is that employers need to know that if they breach that safe work guidance, there's a realistic chance of them being served an enforcement notice by the HSE,' Nowak said.

'[The classification] limited the scope of the inspectors to issue prohibition notices, [as] there is a higher threshold to be met when issuing notices. Inspectors have raised this, through their own union, and it puts individual inspectors in a very difficult position.'

He added that the TUC was 'still seeing a significant numbers of workplace outbreak reports, just yesterday in terms of DHL facility in Trafford Park, in Greater Manchester'.

HSE chief executive Sarah Albon countered that the regulator had 'surgically' targeted its resources at workplaces where it believed the risk was not controlled, and that inspectors were able 'elevate' the risk to serious if they thought that was justified.

'The reality is that employers need to know that if they breach that safe work guidance, there's a realistic chance of them being served an enforcement notice by the HSE'

She defended the decision on 'significant' rather than 'serious' as based on the best endeavours of 'a group of very experienced inspectors and scientists and policy makers', pointing out that the HSE was 'not using these words in their normal English meaning' but to describe the likely outcomes for a typical, healthy worker of being exposed to the hazard.

Quoting from HSE guidance, Clancy noted that a 'significant' risk might cause a 'non-progressive condition or temporary disability', while a 'serious' risk would cause a permanent, progressive or irreversible disability, lifelong restrictions on work capability or a major reduction to quality of life.

Clancy argued that COVID-19 matched the HSE’s definition of a 'serious' workplace risk, 'given the number of people suffering from ‘long COVID’, and the fact that 14,500 have lost their lives'.

Albon acknowledged that the classification – made in early summer 2020 then reviewed in the autumn –preceded emerging evidence on long COVID, and would be subject to further review.

She also suggested that it could have been too blunt an instrument. 'And I think with perfect hindsight, we could have said there's categories one, two, and three [of significant risk].'

But when Labour MP Debbie Abrahams suggested that the categorisation 'reflected a complacent attitude to the issue as a whole last year', Albon interjected heatedly.

'It's the opposite of complacent; we really have turned the organisation on its head to respond to COVID.

'We've put so much resource [into COVID], so much time from both our policymakers, our scientists, our inspectors, as well as a whole new set of people. Because we absolutely recognise the central importance of getting this right,' she told the panel.

Quoting from a letter from Albon to the committee that suggested the HSE had received 18,000 concerns on COVID at work but issued just 33 improvement notices as a result, Labour’s Stephen Timms MP, chair of the DWP Select Committee, asked why this number was so low.

'Employers are far more open and educated than we normally find because they're living that experience themselves. Whereas normally … they’re not actually living the risks themselves, they’re governing the workers who do, and it's a very different conversation.'

According to Public Health England (PHE), there have been around 1,400 confirmed COVID-19 outbreaks in workplaces that were identified by the agency then referred to the HSE.

Professor John Simpson, PHE head of public health, guidance and expertise for the COVID-19 response, said that the interface between HSE and PHE on this issue could merit review.

He said: 'Some workplace issues were actually being picked up by the public health system, and then referred to HSE, rather than the other way around. And so that, again, is something else that may be worth thinking about [in terms of] future legislation.'

Professor Andrew Curran, chief scientific adviser to the HSE, said that it would 'take a while to understand the role of the workplace in the transmission of the virus' given the parallel roles of transmission on public transport, workers’ accommodation and in the community.

However, the HSE was currently leading a 'hugely intensive' national study to investigate workplace transmission, where workers’ samples would be genomically tested to establish transmission routes.

The TUC also highlighted that the HSE guidance for workplaces had not been updated since March 2021 despite an evolving understanding of the risk. Albon confirmed that an update reflecting employers’ responsibilities as workers return to their workplaces was underway, and would cover ventilation strategies, vaccination and the use of workplace testing.

Read part 2 of our report.

For more information on this and other topics raised at the hearing, visit our dedicated COVID section.