Chemicals manufacturer must pay £560,000 over scalding A chemicals manufacturing company has been ordered to pay £560,000 after an employee was left permanently disfigured when boiling water erupted from a reaction vessel.

On 4 March 2016, work was undertaken to clean down part of CalaChem's production plant in Grangemouth, Scotland. The process involved filling the chemical powder charging chute leading down to a reaction vessel (pictured above) with water that was brought to the boil by immersing a steam hose in it.

Falkirk Sheriff Court was told that the water in the chute was boiled overnight and the following day the employee continued with the clean down process. When he tried to empty the boiling water from the charge chute, he opened a valve expecting the water to drain down into the vessel below. However, the vessel below the chute had been pressurised with nitrogen gas and when the valve was opened the pressure in the vessel was released. The scalding water erupted back up and out of the chute severely scalding the employee. 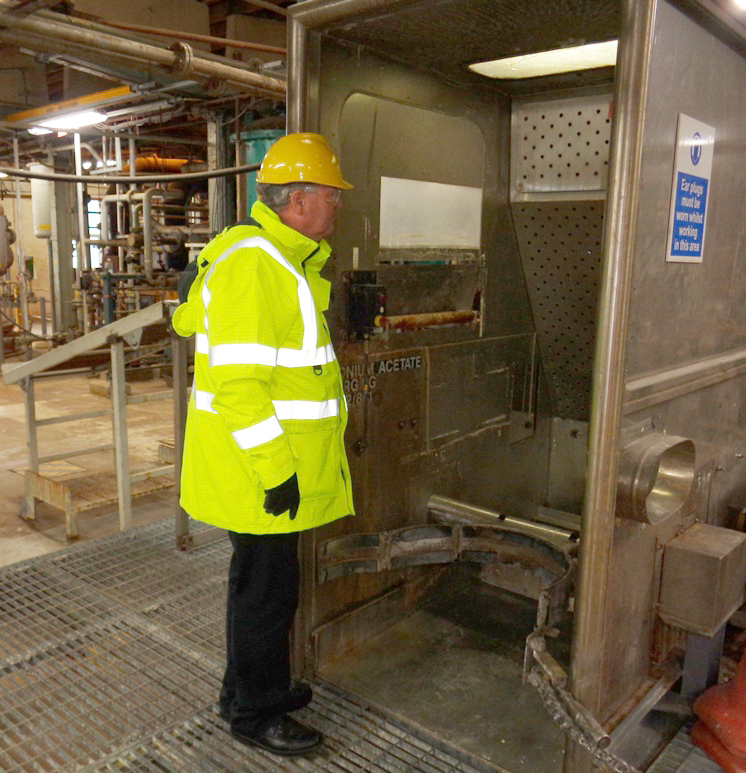 HSE inspector Gerard McCulloch inspects the chute after the incident

Health and Safety Executive (HSE) investigators found that a relatively safe cleaning process of washing down the charge chute with cold water into the vessel below had evolved and changed over time. The process had developed into the practice of overnight boiling of water in the charge chute, while simultaneously pressurising the reaction vessel below as part of a recirculating cleaning cycle. The incremental changes to the cleaning process were not subject to a review of the company’s risk assessment and the danger of pressurising a vessel below a chute of boiling water was not recognised, consequently no control measures were put in place to remove this danger.

HSE inspector Gerard McCulloch, pictured above inspecting the chute after the incident, said: 'Those in control of working processes have a responsibility to assess the associated risks. If changes are made, which increase the level of risk, those in control of the workplace have a duty to reduce the risk back down to as low a level as reasonably practicable.

'If the decision to boil water in the chute instead of hosing it down with cold water had been the subject of a risk assessment, the danger from the pressurised vessel below would have been identified prior to the incident. This would have prevented the employee severe injury and permanent disfigurement.'

CalaChem, which employs nearly 200 people, admitted breaching section 2 of the Health and Safety at Work Act and was fined £560,000. Costs are not awarded in Scotland.

The practice of filling the powder charge chute with boiling water ceased since the incident, the HSE confirmed. The processes to clean down the plant have been risk assessed to introduce new safer worker procedures.