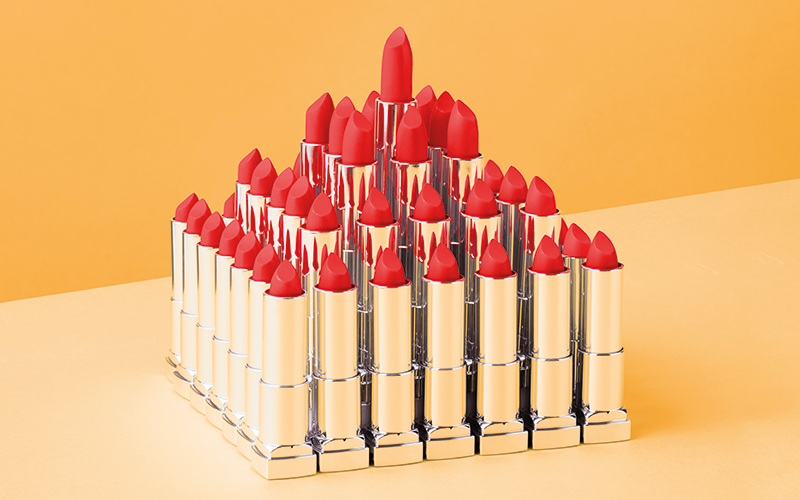 Malcolm Staves, corporate health and safety director at L’Oréal, on building and maintaining an all-encompassing safety culture across the giant multinational’s sites.

Fashioning a safety and health management system that works in 150 countries and covers work settings as diverse as research laboratories, manufacturing plants, offices and retail stores might seem like a daunting task. But it’s one that Malcolm Staves shouldered 12 years ago when he took on health and safety at the world’s largest cosmetics and beauty products company, L’Oréal.

Since then he has created a safety system with the support of a group safety and health team and 19 divisional safety and health directors, under the banner ‘Risk assessment, excellence and beyond’. The phrase describes the French-owned multinational’s continuing evolutionary path from essential risk control, through excellent safety practice, to an extra dimension of employee engagement and ownership of safety in a mature culture.

The system rests on eight pillars, including risk management, safety culture, training and expertise, and KPIs, reporting and audits. The pillars range from foundation elements of a system, such as strategy and objectives, through the cultural and behavioural aspects affecting day-to-day work, such as visible leadership and employee engagement, and on to system verification in reporting and audits.

The absolute requirement to safeguard life trumps everything

The system developed over more than 10 years, then the pillars were introduced as a way to describe it. ‘We wanted to show people on one page and in simple terms an overview of the system,’ says Malcolm. ‘One that would make sense to senior management.’

In the pillars sit 18 programmes covering all aspects of safety and health management, from chemical risk assessment to safety awareness by employees at home. These are explained to managers in a booklet, Essential health and safety (see L’Oréal’s Essential health and safety booklet). For operational staff, the detail of the pillars and the overall system would be too much information and not relevant to their day-to-day work. Malcolm says that the purpose of the programmes will be explained to all employees, who are then consulted on the deployment, followed by targeted training within the national and local culture. In many cases, apart from safety and health information, the vital thing employees know is that ‘we care and they, and their families, are important to us’, Malcolm says.

In a 2019 leadership interview with IOSH magazine about his career to date, Malcolm explained some of these programmes in detail and how the safety system developed. He touched on the top-down, centrally-prescribed nature of some of L’Oréal’s programmes at the risk management end of the spectrum, where the absolute requirement to safeguard life trumps everything. But he believes the clue to the success of L’Oréal’s system in the ‘excellence and beyond’ part of the paradigm is the flexibility of the programmes and their selective implementation. ‘It’s about using the right tool at the right time,’ he says, and adapting those tools wherever necessary.

Overlaid on the ‘Risk management, excellence and beyond’ sequence, L’Oréal uses a tweaked version of the DuPont consultancy’s Bradley Curve model (see A practitioner’s progress, below). The curve proposes four stages of OSH maturity: from a reactive culture, in which safety is the responsibility solely of health and safety staff and basic regulatory compliance is the aim, through to an interdependent state in which safety is everyone’s responsibility and team members look out for each other.

Some of the multiple programmes under each of the group’s eight pillars are universal – such as the LIFE (Life-changing Injury or Fatality Event) programme for serious and fatal injury hazards – while others are rolled out to divisions or sites only when they have reached the appropriate level of maturity. So the Take 2 tool, which requires employees to step back before they start a task and carry out a dynamic risk assessment, is only introduced where workers are judged to have reached the third, independent, stage of maturity, in which they are actively looking out for their own safety and health.

Even at plant level there is leeway for managers to adapt programmes to the local culture; Malcolm says any unsuitable deviation would be picked up in subsequent audits and performance against KPIs, but that has seldom been an issue. 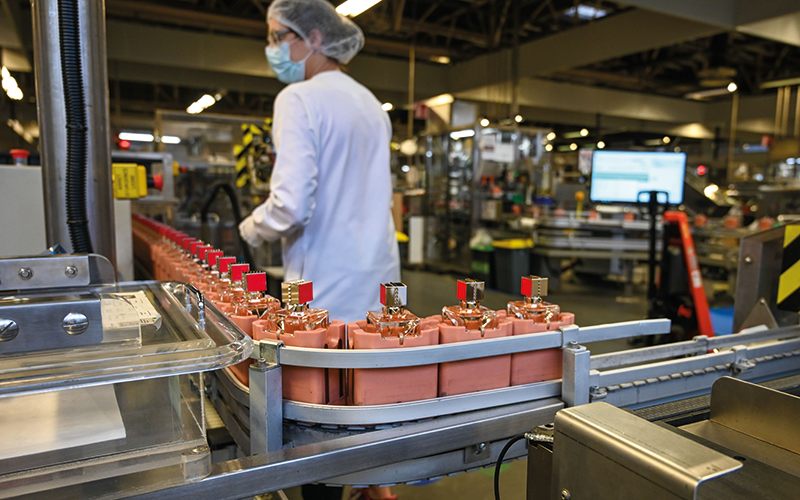 Safety first: Tools you can trust

A lesson that helped cement Malcolm’s belief in the need for systems that respond to culture and circumstances came more than 15 years ago when he was environment, health and safety (EHS) director for
an aluminium producer and bought a well-reputed proprietary behavioural safety system for one of its US plants.

Initially the programme was a big success, he says. ‘But within two years they were one of the worst-performing sites globally in safety culture audits. I couldn’t understand why this had gone so wrong.’ It emerged that the system had so successfully promoted peer-to-peer safety conversations at operator level that the line managers and leaders had felt able to leave them to get on with it and had become detached from OSH promotion. ‘The employees were saying: “The management couldn’t give a damn about us, they really aren’t interested in us at all.” It destroyed visible safety leadership.’

We are all individually on our own journey towards interdependence

‘The lesson was that anything you introduce has to address all layers [in the hierarchy],’ he says. He has carried this through at L’Oréal, which has a suite of behavioural safety programmes for different levels. Line managers, for example, use the MESUR system (Measuring Effectively Safety Using Recognition and Readjustment), which involves regular safety conversations between line managers and operators using open-ended questions such as ‘What could happen unexpectedly?’ Malcolm insists MESUR works because it was developed with the company’s global safety leaders and tested at various sites: ‘It was made by L’Oréal for L’Oréal – it’s organic safety!’

He emphasises that he is not averse to contacting outside support. After all, he brought in an external consultant he trusted during the creation of the MESUR system. But he has an antipathy towards parachuting in experts to solve organisational problems, or buying external systems wholesale.

‘In my opinion, external consultants come in and spend so much time trying to understand our culture or just implement off-the-shelf stuff and it doesn’t fit. It’s like trying to put a square peg in a round hole.’ 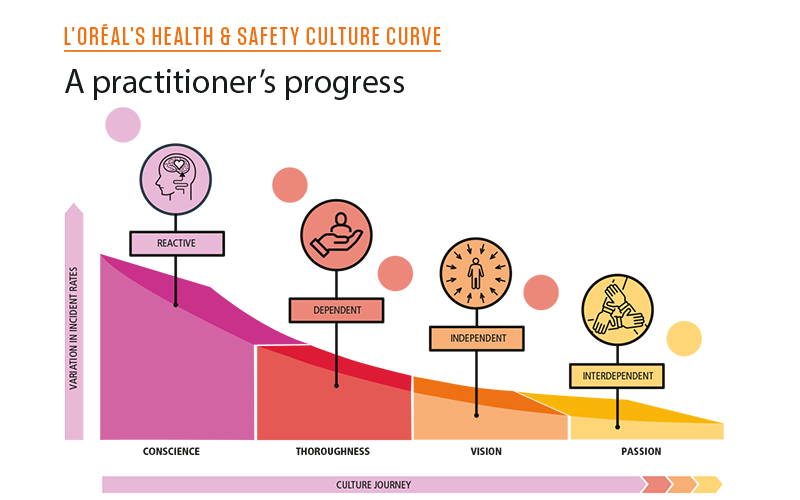 Malcolm stresses that rejecting one-size-fits-all solutions is not the same as being closed to ideas from outside the organisation. His most valuable resource is his professional network. He maintains regular contact with his peers at a mixture of food and chemicals manufacturers and food service companies. The network allows him to benchmark L’Oréal’s policies and performance and against those of comparative businesses but also to draw on the experience of seasoned practitioners.

‘That’s where I get most of my inspiration from,’ he says of the network. ‘We can send an email out asking a question saying “We are looking at something – can anybody help?” Before the end of the day you have emails with copies of procedures, details of what they do and what’s good and bad about it. It’s brilliant.’ Other advantages of sounding out fellow professionals, he adds, is that they have no commercial interest in your adopting their suggestions.

He encourages L’Oréal’s OSH specialists to develop their own networks and to make time to attend conferences. ‘It’s important that people get exposed to external perspectives, that they are a little more worldly,’ he says. ‘If they bring something back as an idea we discuss it as the corporate team at our team meetings, and if there is something that we think could go to the next level we put a case study together and present it to the global EHS directors. Once we have a majority we’ll go with something.’

As an example of an initiative inspired by peer exchanges Malcolm offers the Take 2 dynamic risk assessment tool, inspired by a similar programme at oil giant Total. Another is L’Oréal’s LIFE programme, introduced in 2017 to codify directives designed to minimise serious injuries and fatalities. A conversation with a senior OSH manager at aluminium container manufacturer Rexam – now part of Ball Corporation – convinced him there was a model for a packaged set of life-saving rules that could be adapted for his purposes.

‘We transformed it to be a little more top-down,’ Malcolm says of the template he took from Rexam. ‘If you are talking about somebody’s life, you don’t leave it open to discussion.’

‘We tell our sites every single access to a roof needs to be locked off,’ he says. ‘Every single access to a manufacturing vessel needs to be physically locked off too. It’s no good just having the retaining bolts that anybody can lift off and open, it’s like a lockout/tagout system. Those requirements are non-negotiable.’ The rules were developed by L’Oréal’s EHS directors and his central team. ‘We went through and identified every single item and agreed on them before implementation,’ he says. 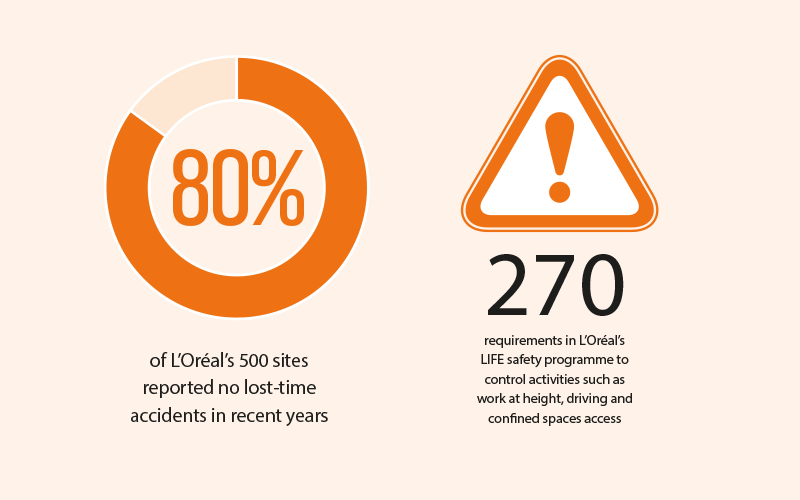 Another programme at the far end of the maturity spectrum, the ‘beyond’ phase of the group’s OSH journey, is the [email protected], [email protected] initiative to make employees conscious of hazards outside of work. ‘The idea for it came initially from benchmarking with the Mitie Group,’ says Malcolm. ‘It’s aimed at changing the health and safety mindset of employees by giving them a sense of “why safety matters to me” through spreading our culture beyond the gates of L’Oréal to our families, communities and other companies.’

Most elements of the system change little at corporate level, but the process of local adaption and their application only when the site or division is culturally mature enough means there is an ongoing flux as sites and teams implement programmes new to them. ‘We are all individually on our own journey towards interdependence,’ Malcolm says, ‘and all at different stages. If you try to deploy a programme when the culture is not ready, we are convinced it will fail. It’s all about the right tool at the right time!’

He gains board support for safety and health initiatives by presenting strong business cases – often drawing on the benefits similar initiatives have brought members of his networks – but also by getting to know what motivates directors individually, including business concerns. I try to understand where they are coming from and tailor my safety and health language in a way that makes sense to them,’ he says.

The combination of outside inspiration and careful adaptation has created a safety culture in L’Oréal which pays dividends. ‘We have a more engaged workforce because they see safety as a core value and a basic right of employment. If you visibly take care of the safety, health and wellbeing of your people then they feel valued and you retain their talent.’

In simple safety performance terms, the system and its underpinning programmes resulted in up to 80% of the group’s 500 sites reporting no lost-time accidents in recent years. But lower incident rates have never been as important for the company as finding the right tools at the right time in the pursuit of creating a positive safety and health culture. ‘If you get the climate right within the business culture,’ says Malcolm, ‘then the performance comes as a result which – simply – is good for the company and its employees.’

This article appeared in our March/April 2021 issue of IOSH magazine.
Click here to view this issue
Topics:
Features
Leadership and management
Management systems
Performance/results
Reputation
Safety
Working with others
Leadership
Manufacturing and engineering