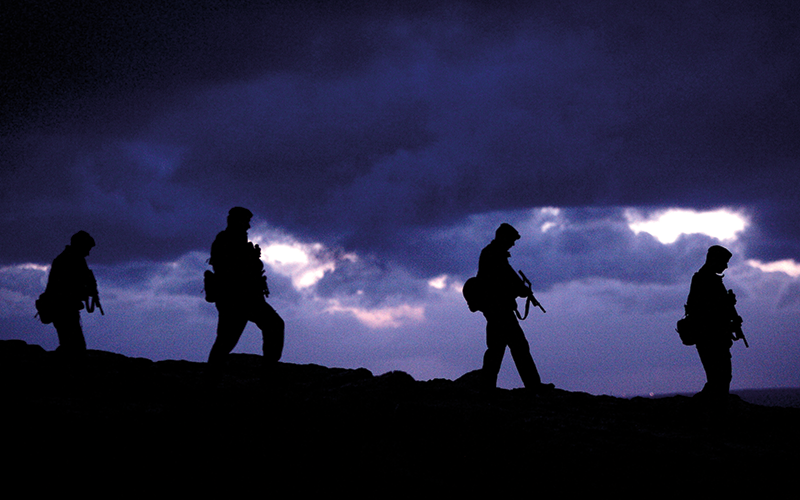 Recruiting veterans to OSH brings many benefits, but it’s a missed opportunity for far too many organisations.

Around 16,000 people leave the UK’s armed forces each year, but as many as three in 10 businesses don’t consider employing veterans. This means that while there are approximately 700,000 veterans currently in employment, more than half find themselves in low-skilled, routine or low-paid jobs.

These figures are from a 2020 report by Deloitte, which calls it ‘an alarming waste of talent’. The document, Veterans work: recognising the potential of ex-service personnel, says that a major contributory factor is that far too many businesses rule out recruiting someone if they have no industry-specific experience.

Martin enjoyed his time in the RAF, but as he entered his late 20s he was considering a change of career. ‘I’d spent a lot of time doing VIP and policing duties when I was posted to the RAF Regiment depot at RAF Honington, where I was seconded to Special Investigations. That’s where I saw my career heading.’

However, it coincided with a significant reduction in RAF police personnel and with it the opportunities to specialise. ‘I thought, I’m going to leave while I’m young enough to retrain and find new opportunities,’ he says.

In the 18-month period before he left, he says he was volunteered for an IOSH Managing Safely course. ‘They were looking for somebody to be a safety rep, so one minute I’m dealing with all things police, the next minute I’m inspecting a welding shop without much of an idea of what I’m looking at,’ he jokes.

His first role was as a mobile supervisor for an insulation and fire protection contractor. ‘Fortunately, I had a great mentor there and he taught me an awful lot about the real world, construction and particularly safety,’ says Martin.

Eventually, he moved across fully and has subsequently progressed to director of health and safety for construction firm Multiplex. ‘Multiplex built the new Wembley stadium, and I’d been a health and safety adviser to Hollandia Structures on that project, which is where I met the director who employed me at Multiplex many years later,’ he says.

He takes a balanced view of ex-military employees. ‘I’ve heard mixed opinions from senior managers in civilian businesses over the years. There is no “one size fits all”, but anyone who’s served will have worked in teams extensively. It means two of the key strengths we have are interpersonal skills and communication. There are no lone wolves in the forces – you really do learn how to forge relationships and how to get the best out of each other.’

The strength of soft skills 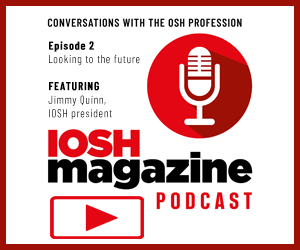 It’s a situation that IOSH president Jimmy Quinn is keen to change. Jimmy, who joined the Scots Guards in 1987 before transferring to the Royal Electrical Mechanical Engineers in 1998, was in the army for 24 years. He’s now senior health and safety manager at Multiplex.

‘Maybe I’m looking through rose-tinted spectacles,’ he says, ‘but veterans can respond to any situation. We have lots of soft skills and know how to speak to people, how to create a team and how to work in one. We’re also really public-facing. We can take in information quickly and make good decisions under pressure, so my view is that we’re very much aligned to careers in health and safety.’

Jimmy says that the higher up you get in the forces, the more involved you become in the role. ‘It might begin with a section commander making sure the guys are pointing their rifles in the right direction on the ranges. Then, when you’re a staff sergeant, you’re looking after equipment and accommodation.’

Jimmy started to think about his future career four years before he came out. He says: ‘A lot of full-time and reserve soldiers take IOSH courses. Originally, I thought I could teach health and safety courses. I did my PGCE and thought I’d be able to start my own business, but then Simon Donnelly [see Case study, below] asked me to be a safety adviser and that’s when I started to apply the practical application of the knowledge I had.’

Jimmy’s move followed a well-trodden path, says Josh Huggins, director at sector recruitment specialist Principal People. ‘Lots of veterans take up IOSH or NEBOSH courses, and a large number approach us about starting out in the industry,’ he says. ‘Approximately one in four of our placements have some sort of military background.’

Listen to an interview with Jimmy here.

Sara joined the Royal Navy at the earliest opportunity. ‘I’d always wanted to join. My first ship was the aircraft carrier HMS Invincible, at the time when [the war in] Bosnia was in full flow,’ she says.

Sara began her naval career as an operator/maintainer on radars and gunnery systems and worked her way up to Petty Officer AWT (Above-water Warfare Tactical). Her final three years were as a firefighting and rescue instructor in Portsmouth. ‘Once I got my teaching qualification, going back to my role in warfare wasn’t something I wanted, and it triggered my exit,’ she says.

Her first job in the outside world was with a height safety and rescue company. She then set up her own training company specialising in working at height and first aid. Now, besides running Sara Quayle Safety, she has a full-time role as a health and safety adviser for consultancy HCS Safety in Southampton.

How was the transition to civilian life? ‘It was strange stepping outside the gates for the last time and not having to be somewhere at a certain time throughout the day. Obviously, calling everybody “sir” or “ma’am” had to stop, but they do support you coming out and I was able to do the IOSH Managing Safely course before I left,’ she says.

Sara has been out of the service for 12 years, but some things are ingrained. ‘The one you’ll hear all the time is timekeeping,’ she says. ‘Also, organisation and being able to look at things practically and make a judgement on what’s going on. With the military, instead of risk assessments, it’s based more on training and communication. Before you did anything, there was always a brief and we’d talk through it.’

There’s also the ability to work under pressure. ‘When you’re in a war zone, you can be away for very long periods. It was challenging. Working in the operations room, we had headsets and were talking to external ships, to the aircraft, and trying to communicate internally. You’re juggling five or six different things within a moment. Once you’ve done that, you can do anything.’

Last year, Josh’s company quizzed health and safety leaders across different sectors about the competencies they looked for. He reports that they came out overwhelmingly in favour of behavioural attributes over technical skills.

‘The behavioural competence that individuals pick up in the military can offer a huge advantage when they come into the sector,’ he says. ‘The ability to structure, to be a self-starter and to overcome obstacles and setbacks – all of these groundings are crucial in health and safety. It’s a real advantage for organisations.’

Veterans can respond to any situation. We have lots of soft skills and know how to speak to people and work in a team 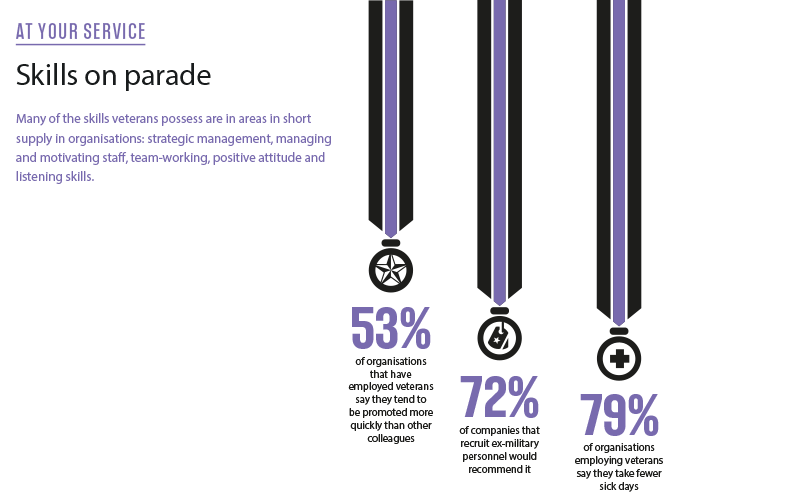 Simon is a Chartered Fellow of IOSH and the UK lead for safety, health, environment and quality at telecommunications company Cellnex. But back in 1983, at 16 years old, he was a raw recruit in the Royal Corps of Signals working as a radio operator.

‘It’s generally a 22-year contract from your 18th birthday, so I ended up serving for 23 and a half years,’ he says. ‘It means that as you’re approaching your 40th birthday, you’re out onto civvy street unless you apply for continuance or extended service. So, a few years out, I had to start thinking about what to do as a second career.’

Simon says that at the time there were three main career options open to the majority of service leavers: private security somewhere like Iraq, the ‘blue-light’ services, or health and safety. He started to realise that much of the military’s role has strong safety connotations. ‘We train in very dangerous scenarios and that’s all about safety, as it allows us to train as realistically as possible. Rather than the myths such as newspaper headlines about banning conkers and stopping kids having fun, I started to see the relevance of it.’

The army has an excellent resettlement package, which includes several weeks allocated to training. It also provides ‘learning credits’, allowing people to build a portfolio of qualifications before they leave. Simon took the NEBOSH general certificate, which the army paid for, as well as the NEBOSH diploma.

After leaving the forces, he worked for eight years at Babcock and has held a number of positions since then, culminating in his role at Cellnex, where he has employed several fellow veterans.

‘They have a number of known qualities such as methodical planning, and they’re usually outcome-focused. They’re driven, motivated and disciplined. The way they approach problem-solving is second to none. Plus, they’ve used their resettlement grant to prove their motivation by getting themselves qualified,’ he says. ‘Employers shouldn’t focus on the lack of experience, but instead focus on the transferable skills, the independency, loyalty, integrity and the resilience that ex-service people bring.’

However, it’s not always easy for veterans. Jimmy says that he found the transition difficult. ‘I left the family I’d had for 24 years and thought I could do it all on my own. At the same time, I was lucky because I discovered IOSH and its network of branches. I found that very useful in terms of learning to be a civilian. I met a lot of good people – and a lot of veterans – in the south coast branch and within IOSH Council.’

Josh says that a challenge for ex-military personnel is that sometimes, on a CV, clients can’t quite see how their experience relates to their world. ‘Volunteering for real work experience, even if it’s unpaid, can really pay off and bolster your CV. Then it’s just about networking. I’m sure everyone who comes out of the military and wants to go into health and safety will know at least one person that’s done the same thing.’

Josh also advises people to find mentors: ‘It helps to have contacts who understand the trials and tribulations you go through during the transition,’ he says. IOSH’s mentoring platform helps to connect OSH professionals. Jimmy also highlights IOSH: ‘We have around 47,000 members globally, many of them veterans, and if I don’t know someone, someone else will.’

This article appeared in our March/April 2021 issue of IOSH Magazine.
Click here to view this issue
Topics
Features
Skills
Career development
Working with others
Leadership