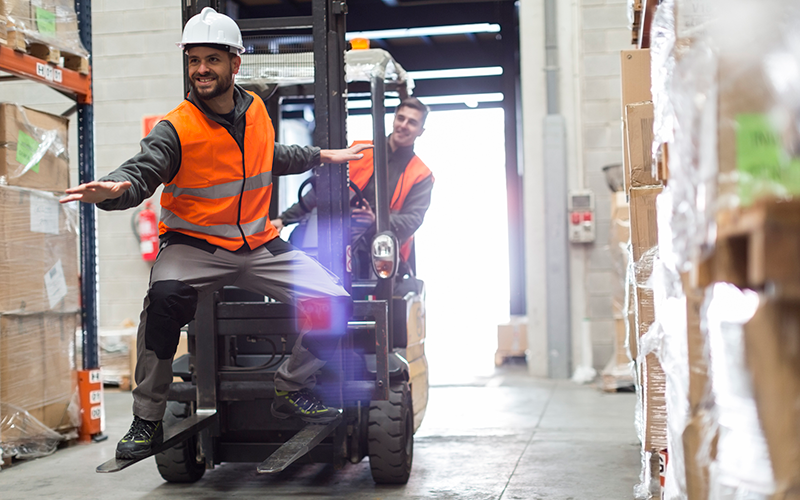 Rough, boisterous play or pranks in the workplace can have serious consequences. We look at key cases involving practical jokes at work, and offer tips on how to prevent horseplay.

Playing around, racing, grabbing, foolish vehicle operation, social pressure, harassment, and unauthorised contests are activities often encouraged by ‘practical jokers’ who pressure other colleagues to get involved. Playing jokes and having fun with colleagues can break up the day, provide stress-relief and make work more interesting, however horseplay can take this too far and put workers at risk.

Is it a health and safety issue?

Cases involving horseplay are common in industrial workplaces such as construction sites, and often where forklift trucks are used. But other cases have included pharmacies, hospitals and offices where pranks such as pulling out a chair has resulted in injury.

Regardless of the sector, it is management’s responsibility to ensure all employees have access to a safe, respectful and harassment-free place to work.

The Health and Safety at Work Act does not specifically discuss horseplay, but does make requirements for employees regarding health and safety.

Section 7 of the Act requires employees to 'take reasonable care for the health and safety of himself and of other persons who may be affected by his acts or omissions at work'.

Section 8 requires that no person shall intentionally interfere or misuse anything provided in the interests of health, safety and welfare. These duties extend to avoiding silly or reckless behaviour, and those who fail to comply with these duties may make themselves liable to be prosecuted.

In the Health and Safety Executive's operational guidance on prosecuting individuals (OC 130/8), some acts of horseplay and violence against people will come within the scope of section 7 if they arise out of, or in connection with, work and put people’s health and safety at risk. Examples of this include horseplay with air-lines, staple guns, highly flammable liquids and ‘initiation ceremonies’.

However acts that are not directly related to work, and are more of a personal nature will not be within scope, such as an employee assaulting a supervisor because he believed the supervisor had stolen his wallet.

It is most likely that employees will be prosecuted under section 7 where they have shown a reckless disregard for health and safety, and such disregard has resulted in serious risk.

It is a common misconception among employees that health and safety is the sole responsibility of the employer and if an accident or incident were to occur due to horseplay, that resulted in the injury of another person, it would be the employer that would have full responsibility. However pranks at work that injure or threaten to injure another person may be the subject for individual prosecution against the person responsible.

The law of vicarious liability has been steadily expanding, but there are areas where responsibility is still unlikely to arise on the part of the employer.

Last month IOSH magazine reported on Chell v Tarmac [2020] EWHC 2613, the latest decision to demonstrate that it will be difficult for an employee to succeed where they have been the victim of a practical joke played on them by a colleague.

The claimant was a site fitter and was contracted out to a site which also had its own fitters, where tensions existed between the two groups of employees. An employee brought ‘pellet targets’ to work and put them on a bench close to the claimant’s right ear, he then hit them with a hammer causing a loud explosion, as part of a practical joke. The claimant suffered a perforated right eardrum, noise-induced hearing loss and tinnitus.

'Even though the employee’s act could not have been foreseen by the employer, it was still part of his employment and the employer was vicariously liable for their employee’s negligence'

The claimant brought proceedings alleging negligence directly against the employer and also against them as being vicariously liable for the actions of the employee, but was unsuccessful on both counts.

Nevertheless employers can be held vicariously liable for employees where it can be proven that the employer is aware of the horseplay taking place but does not take precautions against it or stop it from occurring.

In that case, a tool grinder was injured at work whilst standing on a duckboard of his machine. Another employee, while pushing a truck along in front, decided to push the edge of his truck under the tool grinder’s duckboard, as a joke. The duckboard tipped and the tool grinder fell, causing injury.

Applying the test, it is reasonable to say that even though the employee’s act would not have been foreseen by the employer, it was still part of his employment and they were vicariously liable for their employee’s negligence.

In 2016, the Health and Safety Executive (HSE) uncovered more than 200 examples of 'appalling' transport practices, with 'extended, terrible horseplay', prior to the death of an employee at Rainbow Waste Management (read IOSH magazine's report here).

CCTV showed workers having to jump out of the way of vehicles and machinery being driven by somebody seated in a chair. Ashley Morris was crushed to death when the bucket of a motorised loading shovel on a bobcat hit him, resulting in fatal injuries to his head and spine.

HSE principal inspector Elizabeth Hornsby said the 24-year-old was operating the unmanned bobcat remotely and had manoeuvred it under power to go backwards, towards him. The hydraulics slowly failed and the bucket hit him, and he possibly knocked the controls, but his actions remain unexplained.

An HSE investigation revealed a 'litany' of unsafe practices in the 10 days prior to his death, and what he did was 'unusual but not completely out of kilter with everything else that was happening, the custom and practice'.

The company was fined £136,000 and ordered to pay full costs of £64,770 for breaching the Health and Safety at Work Act, not only for the death of the employee but the 'consistent disregard of worker safety on the worker premises over a 10-day period'.

Employers cannot rule out that horseplay at work can result in injury and there are cases where they can be held liable for the actions of their employees. To help prevent this, they need to have appropriate policies and procedures in place relating to horseplay that informs employees of the consequences of inappropriate behaviour at work, and set out clearly what is considered acceptable and unacceptable behaviour.