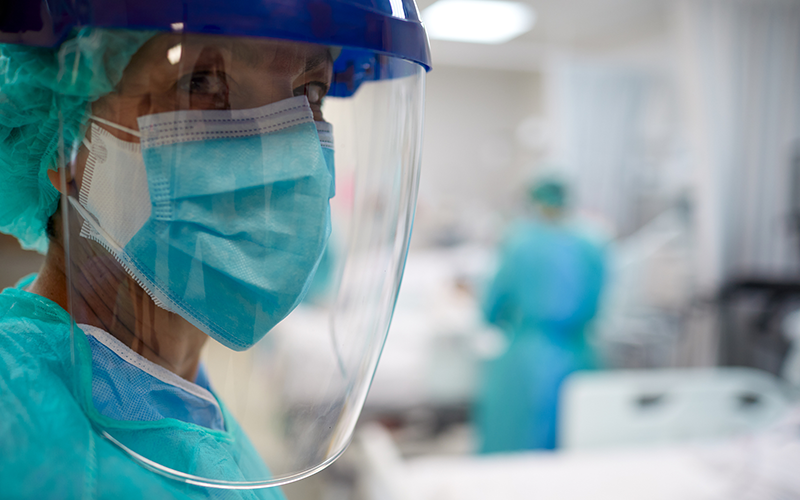 The mortality rate from COVID-19 in the UK peaked in manual workers in processing plants, security guards and those in 'elementary occupations' including construction and care workers, according to calculations on death rates from COVID-19 in the working age population.

In total, the Office for National Statistics (ONS) figures for 7 March 2020 to 28 December 2020 suggest that men in six out of nine broad occupational categories experienced a 'statistically significant' rate of fatal cases compared to the working population as a whole.

Working age women were less at risk of dying of COVID-19, however, with raised mortality rates seen in just three of the ONS’s nine principle categories.

Men continue to have higher rates of death than women, making up nearly two thirds of these deaths

The ONS found that teaching and education professionals were not at higher risk of dying from COVID-19 than the rest of the workforce, with 139 deaths recorded between March and December (73 female and 66 male.)

Overall, the ONS acknowledges that employees working in close proximity to colleagues appears to raise the risk of dying from COVID-19 death above that of the rest of the working population.

However, the government’s statistical body stops short of declaring that particular occupations are a risk factor for dying of COVID-19, as its data is not statistically robust enough to draw firm conclusions: while the data was adjusted for age, it does not factor in different ethnicities or geographies.

Ben Humberstone, head of health analysis and life events at the ONS, said: '[The] analysis shows that jobs with regular exposure to COVID-19 and those working in close proximity to others continue to have higher COVID-19 death rates when compared with the rest of the working age population. Men continue to have higher rates of death than women, making up nearly two thirds of these deaths.

'As the pandemic has progressed, we have learnt more about the disease and the communities it impacts most. There are a complex combination of factors that influence the risk of death; from your age and your ethnicity, where you live and who you live with, to pre-existing health conditions.

'Our findings do not prove that the rates of death involving COVID-19 are caused by differences in occupational exposure.'

According to the ONS, the highest number of death certificates were for 'elementary process plant workers', performing manual work in processing or manufacturing businesses.

The figures for the construction sector were also raised: 'elementary construction occupations' saw 82.1 deaths per 100,000 men, with 70 deaths.

Security guards and related occupations had the next highest rate of death, with 140 deaths, representing 100.7 deaths for every 100,000 men in such jobs – roughly three times the all-worker average for men.

Within this category, mortality peaked among care home workers and those who provide personal care in people’s homes: there were 109.9 deaths per 100,000 males and 47.1 deaths per 100,000 females – a level three times the average for women in the workforce.

The data highlighted that men in administrative, office-based roles sales – a category that includes civil servants working for national and local government, and government agencies – died more often than peers in the working population, along with male colleagues in customer service roles.

The mortality rate for women in office-based sales and customer service roles, also likely to include call centre staff, only avoided being in the “statistically significant” category due to the confidence intervals applied to the data.

The government recently announced it is asking councils to target key workers for regular COVID tests.