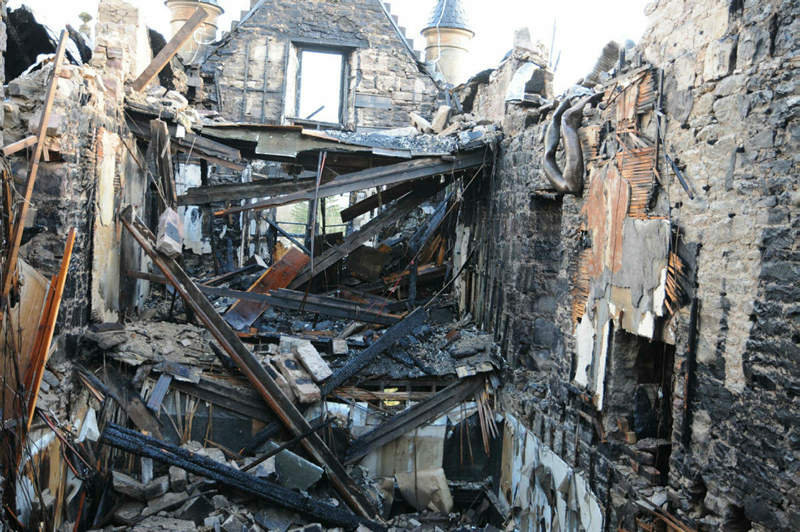 A luxury hotel in Scotland and its night porter have been prosecuted following a huge fire that killed two guests.

Cameron House Resort in Loch Lomond was ordered to pay £500,000 while employee Christopher O'Malley was given a community payback order to carry out 300 hours of unpaid work after he placed a plastic bag of ash in a cupboard containing kindling and newspapers, igniting the blaze.

In the early hours of 18 December 2017, staff noticed smoke coming from the cupboard. Shortly after the fire took hold and flames quickly spread. Guests and staff evacuated the hotel.

Richard Dyson, 38, and his partner Simon Midgley, 32, were found to have died as a result of smoke and fire gas inhalation on the second floor.

Just three days earlier, 35-year-old O’Malley had been told not to put ash into plastic bags.

CCTV from 03:52 to 06:27 Monday 18 December 2017 showing Christopher O’Malley emptying ash into a refuse bag and placing it in the concierge cupboard and the subsequent start of the fire. CCTV courtesy of Crown Office.

Fire risk assessments carried out in 2016 and 2017 found that there was no written policy in place covering the emptying of hot ash from open fires. At the time of the fatal fire there was still no written procedure to follow.

On 22 August 2017 Scottish Fire and Rescue Service (SFRS) carried out an audit of the hotel which highlighted the unacceptable issue with combustibles being stored within the cupboard.

The investigation found that the company had failed to take the necessary fire safety measures required to ensure the safety of employees and guests and have proper procedures, training and supervision in place for the disposal of ash and embers from the hotel's solid fuel fires.

The company also failed to keep the cupboard that contained potential ignition sources free of combustibles and maintain and empty metal bins used for the storage of ash and embers.

Last year, a hotel in Lincolnshire was ordered to pay a £250,000 fine for repeatedly ignoring improvement notices after an inspection revealed a string of fire safety failings.