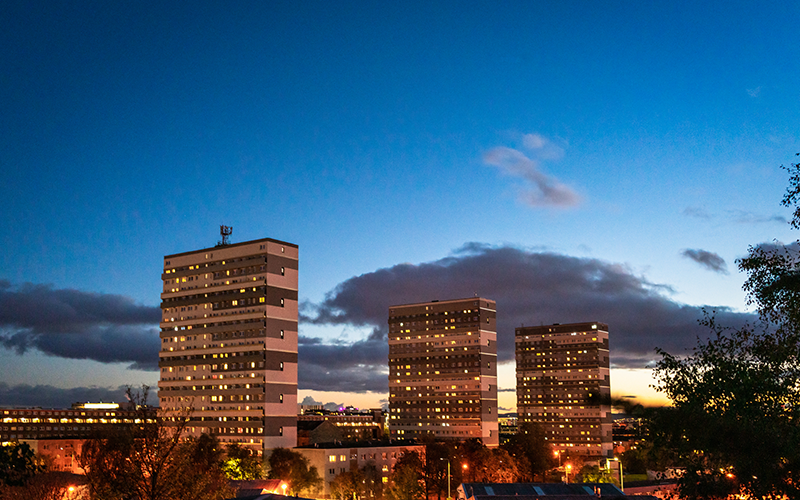 As the construction sector continues its work amid the pandemic restrictions, it is also preparing for the impending Building Safety Bill regime. But is the industry heeding Dame Judith Hackitt and the HSE’s call for a proactive culture change, or is work being shelved until a later date?

Around 13,000 high risk residential buildings (HRRBs) in England over six storeys or 18 metres will be in scope to the new 334 page Bill, which could come into force in October 2021. Once on the statute book, it is due to be followed by secondary legislation creating additional regulations that will further define the range of new roles and responsibilities it creates.

As well as official 'early adopters' who have been trialling its measures on behalf of the Ministry of Housing, Communities and Local Government (MHCLG), the sector includes volunteer pathfinders, such as housing association The Guinness Partnership, with a portfolio that includes 35 HRRBs.

Gavin Pierson, who was appointed last April as director of building safety, is proud of the association’s record. 'The culture is already well embedded in everything The Guinness Partnership does,' he says. 'We’re not waiting to be told, we’re getting on and doing it. We’re definitely one of the front runners.'

The Guinness Partnership is hiring its first two building safety managers (BSMs), part of a building safety team dedicated to implementing and managing the new regime that is due to be in place by February. 'We weren’t initially sure what the scope of the role would be, but a picture is beginning to emerge. Over the next six to 12 months we’ll keep the role under review to see how things develop in practice, but we’re already clear that having a regular physical presence there will be important.'

While Dame Judith Hackitt has described the BSM role as a 'worthy' one that individuals will aspire to, others agree that there is still fundamental uncertainty around its scope.

“A lot of housing providers want to act, and be seen to act, but there is still a lack of clarity around the BSM role,' says Malcolm Shiels CFIOSH, FaPS, chair of the construction group at IOSH, and safety, health and environment framework manager at infrastructure contractor Costain. 'How many do we need for x buildings? How much do we pay them? I don’t think enough people have asked these questions.'

Gavin is looking for 'competence, experience and a qualification in fire safety' plus 'leadership qualities, tenacity and diligence'. He predicts that 'demand [will] outstrip supply' with organisations competing for staff.

However, he refers to a 'mixed bag of reactions' in the social housing sector. 'Most are proactive, although a few are more reticent, saying "it’s a daunting challenge in today’s marketplace".'

The bill requires that building owners or developers produce "safety cases" for new and existing HRRBs, which could form a considerable task and budget item: as a rough estimate, Gavin says that compiling a file of evidence for an existing building could reach hundreds of pages and cost tens of thousands of pounds.

Malcolm agrees that costs [of retro-compiling building safety case files] have been a sticking point. 'There is no case to argue against putting the requirements into place, but organisations don’t have a bottomless pit of money, and will need to set their budgets accordingly.'

However, only a shorter summary "safety case report” covering structural issues and the building’s fire integrity, plus evidence of how these are managed, is submitted to the Building Safety Regulator for approval.

'For a new building property, assembling the safety case should be fairly straightforward as the data will be digitised in the BIM model and Golden Thread,' Gavin says. 'But for existing buildings, it all depends on the standard of building data that already exists in the operations and maintenance manual and the health and safety files.'

He adds: 'And what happens when the cladding was installed 20 years ago, and you have to demonstrate it's safe? The regulator will want to know that you’ve done all you can.'

The Guinness Partnership portfolio includes more than one building over 100 years old within scope of the Building Safety Bill. 'From a building safety case perspective, it’ll be a struggle to evidence, but not insurmountable; we’ll start with a Type 4 survey [for fire risk assessments],' Gavin says.

Guinness has written a pilot building safety case, which was reviewed by the MHCLG before being revised ahead of a second submission; the findings will be applied to a programme of building safety cases, which will also use software to track and log all fire doors and other safety measures.

A bespoke set of information has also been placed in a “safety box” for residents and firefighters in each HRRB.

Meanwhile, residential projects in its new-build pipeline have already "anticipated the building safety gateways” Gavin says, referring to the regulatory hurdles at planning, pre-construction and pre-handover. 'It might not fully reflect the final system, but we’ll be familiar with the gateway requirements and the principle of demonstrating safety [to an external assessor] before we proceed.'

But just how representative is The Guinness Partnership? Steve Coppin CFIOSH FCIOB FaPS, who sits on the Association of Project Safety’s Building Safety Bill committee, feels that many developers and building owners are not fully engaged.

'Many don’t feel there’s a justification to spend on something that may not happen, if the building concerned doesn’t actually go ahead – property investment is not happening to the degree it was.

'There have not been any recent cases where clients have been heavily fined for not following the principles of CDM, let alone breaching the HSAWA. Therefore, it can be difficult to persuade them to invest and see the benefits: this legislation is not here yet, and Brexit and COVID have already taken up a lot of resources.'

But Malcolm notes comments by Dame Judith Hackitt, at an online conference organised by the Building Engineering Services Association in November, hinting at “rewards” for firms taking preparatory steps early. Dame Judith reportedly said: 'We are looking at ways to recognise those companies and reward them with a special accreditation for taking the lead – giving you another reason to be ahead of the game.'

Malcolm comments: 'That’ll be interesting; the carrot is on offer, and the stick will come further down the line if organisations don’t act on it.'

To mobilise the industry in preparation for the new regime, a group of “early adopter” contractors, developers housing associations and local authorities, supported by the MHCLG, has launched the Building a Safer Future Charter, which its chief executive Amanda Long says is 'focused on driving up standards, changing culture and behaviours and raising the bar in relation to building safety from design through to management and maintenance'.

The new organisation, which has been set up as a not-for-profit company managed by the Considerate Constructors Scheme, is seeking new signatories to form a community of best practice, sharing examples and case studies. However, they can progress from “entry level” to “progression level”, which will involve external benchmarking and standards verification.

Amanda, who is also chief executive of the CCS, explained: 'We will be providing a robust approach to benchmarking and independent verification of projects which will be registered with the Charter, as well as providing a public portal for anyone to raise concerns they may have about the safety of a building or project that is registered with the Charter. We will be piloting the benchmarking process during Q1 2021, with a view to launching it early during Q2 2021.'

Other moves are also afoot. Following the "Setting the bar" report from the industry-led Competence Steering Group, more details to help clients assess bidders’ competence will arrive in the form of a Publicly Available Specification (PAS) to be delivered by the BSI on behalf of the MHCLG and the newly-established Built Environment Competence Strategy Group that will set out clear requirements for the three newly-regulated roles: principal Designer, Principal Contractor and Building Safety Manager (BSM).

Steve, who has advised the BSI research and insight team developing the PAS, says that a publication date is the end of March 2022. 'One issue is distinguishing between a principal designer for CDM, and the additional duties as a principal designer under the proposed Building Safety Act and its secondary legislation, and the additional competencies required,' he says.

'The wording of the bill is that the principal designer should be competent to apply the Building Regulations on all buildings, while there is a number of CDM principal designers on projects today who are not designers and/or in control of the design during the pre-construction phase.'

Secondary legislation is also expected to set out more details on the three project gateways (at planning, pre-construction and pre-handover), and compiling both the fire and emergency file and building ‘safety case report’ to be submitted to the new building safety regulator.

As Steve notes: 'Unlike the oil and gas or chemical industry, a building failure is likely to have a possible number of things gone wrong, so it is not clear how much detail needs to go into the safety case report, as yet. We know that the building safety manager, who reports to the accountable person, needs to keep this up to date as the building is maintained, cleaned or changed, and to ensure that the requirements of the Building Assurance Certificate are complied with, but there is lots of meat to add to the bone.'

Meanwhile, the Chartered Institute of Building (CIOB) has set up a Level 6 Diploma in Building Safety Management to qualify would-be BSMs on post-handover safety management, a course that will take at least six months to complete. 'They believe that’s the bar for managers,' says Steve.

The HSE itself, in the process of setting up the new Building Safety Regulator, has discussed a programme of “engagement” with the industry. Asked by for more details, it said that this activity had already begun, adding: 'We will continue this engagement activity, including a future campaign to help raise awareness of what is changing, when and what they can be doing now to prepare ahead of the legislation. This will include a focus on residents so they can understand their rights and what is being done so they can feel safe in their home.

'We hope that we will soon be releasing guidance that explains the difference between managing a hazard and risk management and the framework of a safety case.'

But Malcolm points out that the construction industry itself will need to provide both a platform for debate and further detailed guidance. 'The HSE is busy getting the regulator set up and will be reliant on the industry [to hold webinars and share best practice]. I think that’s an area where IOSH and the construction group can help.'