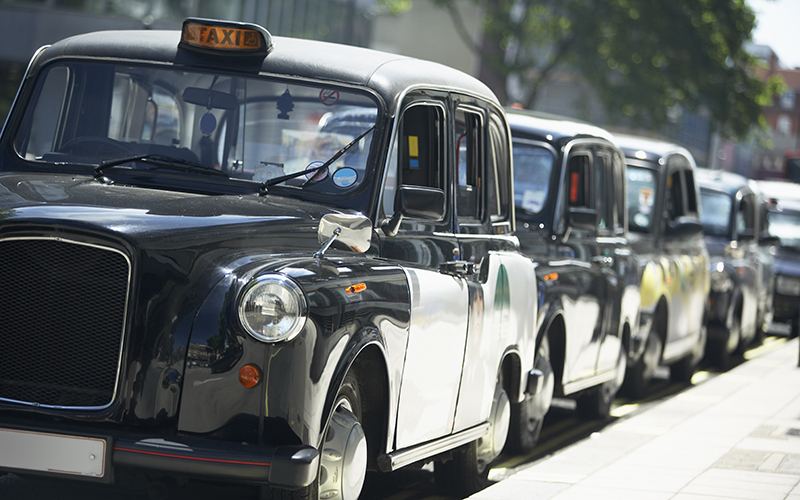 Mike Hedges has been a London taxi driver for 30 years and more recently became a researcher into air pollution. He tells Matt Lamy why taxi drivers are the first to suffer from poor air quality and what can be done about it.

The findings of the recent Driver Diesel Mitigation Study (DeMiSt) – and the fact that taxi drivers are exposed to more pollutants than any other group of professional drivers – came as a slight surprise to one person in particular. Mike Hedges has been a London taxi driver for more than 30 years and now holds a Master’s degree in global air pollution. While he knew that he and his colleagues had a fair level of exposure, even he never imagined it was this high.

'I was shocked by the extent of it. I thought that we were probably very exposed to poor air quality but I was shocked at just how high the levels of exposure were for taxi drivers compared to other groups of drivers,' Mike says.

The DeMiSt study, which was funded by IOSH, looked for evidence of black carbon, which is an indicator of diesel engine fumes. The results showed that, on average, taxi drivers have the highest levels of exposure at 6.5 micrograms of black carbon per cubic metre of air (µg/m3) while driving, more than 50% higher than that average among all types of professional driver (4.1 µg/m3). That average for all types of driver is around four times higher than exposure at home (1.1 µg/m3) and a third higher than would be experienced at a busy roadside (3.1 µg/m3).

Mike played a key role helping DeMiSt contact and work with the taxi drivers who contributed to the study. This came about following his own steps engaging environmental groups with his trade.

'With more awareness about pollution and things like the ULEZ [Ultra Low Emission Zone], as taxi drivers we start to become a target because we’re prominent in the streets – everybody sees taxis driving around polluting,' Mike says.

'So I started to think that the best way to tackle this was to speak to environmental organisations and explain to them that we may be polluting, but it’s not our fault. These are the vehicles that we are given to drive, and we already knew that we were among the worst people effected by pollution, so we want to do something about it if we can.

'I contacted Friends of the Earth, Global Action Plan, and a few other groups to try and speak with them and explain that we’re not the enemy, we want to help clean up the air. We did an experiment and a video with Global Action Plan, and through that I got to know Shanon [Lim – DeMIST research assistant and PhD candidate] at King’s because we used their equipment. Shanon then contacted me about recruiting some taxi drivers I knew for DeMiSt.'

Researchers put a personal monitor in drivers’ cabs so they could record the levels of black carbon that drivers were exposed to. The particular issue with black carbon and, by association, diesel exhaust fumes is that they can contain up to 10 times the amount of soot particles found in petrol exhaust fumes. This can cause cancer and other health problems. Mike says the long-term effects of driving a taxi are something that’s relatively well known in the business.

'A lot of drivers develop asthma, which is something you get from being exposed to a lot of pollutants. Then, especially as they get older, drivers start to get high blood pressure and other health complaints,' he adds.

'I don’t think there have been any studies that have shown a categoric link between air pollution and ill health in taxi drivers, but there is evidence to show that ill health is related to pollution. It’s also disproportionately high among taxi drivers when compared to other trades.

'A lot of drivers suffer from shortness of breath and things like that when they retire or get older. While you can’t say it’s a direct consequence of air pollution, it does seem likely that there are links.'

Quite why taxi drivers are exposed to so much more black carbon than other drivers hasn’t been established but Mike has some theories.

'Taxi drivers spend all the time actually in our taxis, sitting behind other polluting vehicles, and we don’t get any breaks. The study compared taxi drivers with people like ambulance paramedics, but they’re jumping around from job, to hospital, back to their station – so they’re not constantly in the vehicle for the same length of time,' says Mike.

Another issue, Mike notes, is the build of taxis themselves: 'A lot of taxis are older, so drivers are not so protected within their vehicle, and most drivers also have their windows open a lot of the time because we’re stopping talking to people, so that lets in the polluted air.'

In fact, the DeMiSt study showed that closing the windows is one way to limit taxi drivers’ exposure to pollutants.

'Of course, if you close the windows you then get a build-up of carbon dioxide in the cab, so you have to open the windows when you get to lower pollution areas. That takes a bit of thought and planning – it’s not always that easy to do these things. But personally, after seeing the findings, that’s the approach that I’m taking,' Mike adds.

In the longer term, technology – especially the introduction of electric taxis – will help drive improvements, both for the urban environment generally and taxi drivers specifically.

'The other thing the study found was that if you’re driving an electric vehicle it also offers better protection for the driver, because they are better built and sealed better so you don’t have pollution getting into the vehicle in the same way. They also have filters to prevent the particulates coming in, unlike the older diesel vehicles. So they are better, not just for the environment but for the driver as well,' explains Mike.

But again, he says practical necessities mean those improvements will only happen gradually.

'Currently there are 4000 or so electric taxis out of a fleet of 20,000 in London – so it’s still only a fifth of the fleet. But if you currently drive a diesel taxi, you’re not going to swap it, especially not at the moment, because they’re expensive to buy even with the grants. Even after the grant they cost around £60,000, which compares to about £47,000 or £48,000 for a diesel. Most taxi drivers just can’t find that sort of money.'

In many ways, taxi drivers lose twice when it comes to pollution: first, through the direct effects on their health; and secondly, through their association as being one of the causes of it. Because of this, Mike says, getting the massage to drivers is difficulty and the last people who want to hear the news of DeMiSt’s findings are probably taxi drivers themselves.

'There is this worry that if you talk about the issue too much, all it does is bring it to people’s attention that we’re driving diesel vehicles. For a lot of drivers, they think don’t mention pollution and forget about it, even though we’re the ones who are worst off,' says Mike.

'But this is an unseen issue – you don’t realise that it’s occurring – it’s only when you get a study like this that goes and puts monitors in the vehicles that you can understand what’s happening. And the health consequences are quite dramatic. So, as taxi drivers we are also suffering – it’s certainly no interest of ours to have a polluted environment.'