Who cares for the carers? 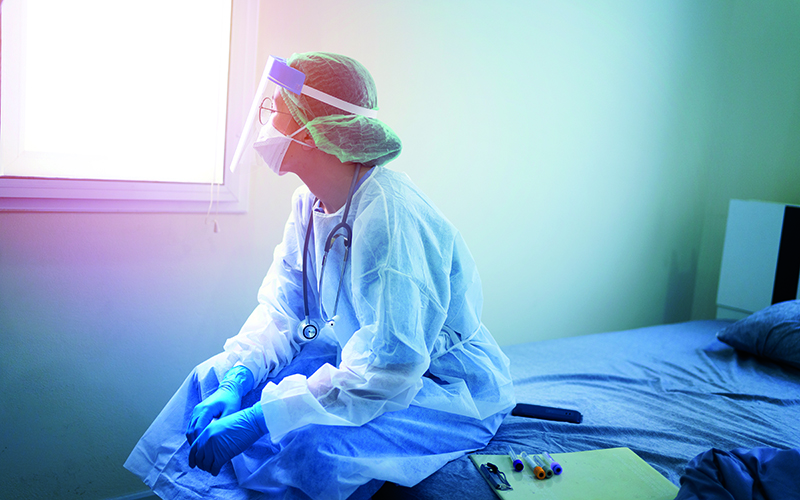 Since 2010, more than 50 countries have developed national programmes to protect the health and safety of workers in the healthcare sector. Why are these programmes so important?

Lack of protection for health workers during the pandemic, such as the acute PPE shortages in the UK in the spring, epitomises why the World Health Organization (WHO) and International Labour Organization (ILO) have called for national occupational health programmes in the healthcare sector. In 2010 they devised a global framework for countries to develop such programmes ‘because the health sector does not receive sufficient attention for the protection of workers’, according to Dr Ivan Dimov Ivanov, team leader, occupational health, at WHO. ‘In some countries the general OSH regulations are issued under old factories legislation, so they don’t apply to the health services,’ he adds.

IOSH has been working with WHO and ILO to promote such programmes (see IOSH’s role, below). ‘It’s still the case in many countries that national OSH legislation lacks full coverage for people employed in the health and/or social care sectors,’ a spokesperson for IOSH says. ‘This often results in health workers being unprotected from occupational risks, which is unacceptable.’

Argentina’s Ministry of Health of the Nation launched the Health Workers’ Care Plan in May 2020, to provide health workers with PPE, training on its use, access to tests and a register of health workers who tested positive for COVID-19. There are also mental health tools for health workers under the plan.

‘The government’s role as a regulator, as a provider of healthcare regulations in the context of a pandemic of unpredictable and extraordinary consequences, must be sustained through its actions,’ says Dr Judit Diaz Bazán, undersecretary of quality, regulation and supervision at the health ministry.

Again, a partnership approach is taken with representatives of guilds, health workers, social and civil organisations to monitor the plan, develop regulations for and measure the impact of the plan and link this with health staff directly affected by COVID-19.

While there is no formal national programme in the UK, the NHS Staff Council’s Health Safety and Wellbeing Partnership works closely with the HSE to develop workplace standards for the NHS. Further resources and good practice guidance for NHS organisations to follow and country-specific initiatives have also been developed. For example, employers and trade unions are collaborating to reduce violence in the NHS in Wales.

‘The benefit of our approach is that it is done in partnership,’ say the co-chairs of partnership, Kim Sunley and Jenny Michael. ‘We have a variety of employer representatives, including occupational health advisers, health and safety managers and HR professionals across all sectors. NHS trade unions are also represented on the group and we bring our expertise and the experience of our members at the coalface together.’

Healthcare makes up a significant proportion of the global workforce and is one of the most hazardous sectors to work in. For example, says Ivan, following an outbreak of bacterial meningitis in one African country, there was a shortage of health workers to respond because they hadn’t been vaccinated. ‘It was not because there was no vaccine. It was because nobody had thought to vaccinate the health workforce, because there was no OSH programme for them,’ Ivan says. ‘That is one of the reasons the minister for health decided to develop a national programme for OSH of health workers.’

Programmes must combine the identification of hazards, the promotion of incident reporting and a written, national policy with measures specific to the health sector, such as providing ongoing immunisations. According to WHO, any national OSH programme for health workers should aim to provide ‘decent, healthy, safe and favourable’ working environments in the health sector, the prevention of occupational diseases and injuries and ensuring regulatory compliance of health services with national OSH standards.

‘Any programmes should reinforce and put in place the existing elements of OSH regulations and policies and adapt them to the specific conditions of the health sector,’ Ivan says.

While it is too early to determine the impact of each national programme, WHO is currently preparing a technical package for the development and implementation of OSH programmes for health workers, which will include suggestions for measuring their success, Ivan says. ‘The number of healthcare facilities which have established OSH policies and systems, and the occupational disease and injury numbers among healthcare workers are important indicators of success,’ he adds. ‘It’s also important that such OSH programmes include systems for monitoring and evaluating implementation, based on the realities of the country.’ 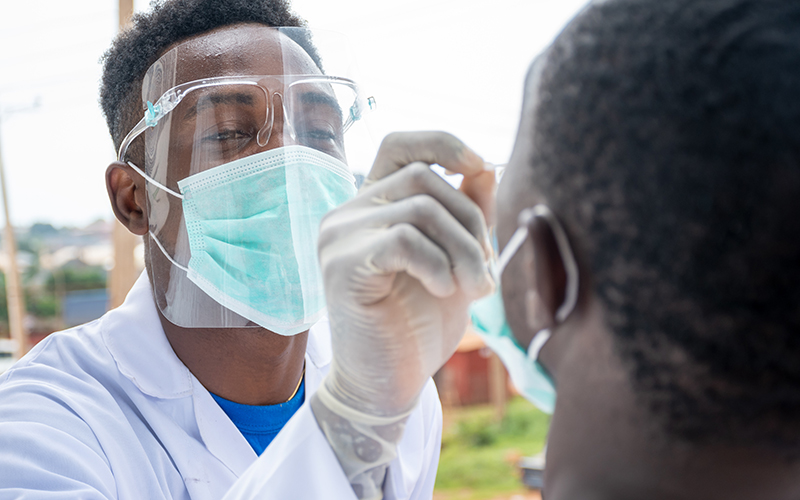 In Ghana, for example, the impact of its national programme is measured by the numbers of injuries, instances of ill health and deaths that are reported, absenteeism levels and work output. ‘We have seen improved infection control, have a low level of injuries, especially those involving needles, and improved staff wellbeing,’ says Dr Lovelace Digber of the Ghana Health Service.

Over in Tanzania, an independent evaluator will analyse and feedback on the success of its national plan. Joseph Birago, environmental health officer at the Ministry of Health and Social Welfare, says: ‘We have seen benefits at different facilities but generally we see that the self-demand of workers for improving their workplace is promising.’

So far, 20 regional coordinators and 136 health facilities staff have been trained in the Tanzanian programme. Training for professionals in the remaining regions is to come. Among other things, the programme highlights workplace hazards and their associated risks, which helps people to develop measures to mitigate them and creates a good working environment.

‘This is important for changing attitudes among workers,’ says Joseph Birago, environmental health officer at the Ministry of Health and Social Welfare. ‘Health workers are considered to be service providers to clients, yet they face trauma, ergonomic injuries and sometimes violence from clients or relatives. The programme helps workers understand these challenge and design mitigation measures in the workplace.’

In 2010 a national occupational health programme was commissioned for health workers in collaboration with WHO. Across different regions of the country, ‘focal persons’ were selected and trained in implementing the programme.

However, one of the biggest challenges faced was that most focal persons also had their core responsibilities. ‘Focal persons carry out OSH activities, when they have time,’ says Dr Lovelace Digber of the Ghana Health Service. ‘We decided that there should be dedicated staff to manage OSH activities in all regions, with the headquarters overseeing and supervising the regional officers,’ she adds.

‘But every programme is faced with challenges and learning from these experiences builds a better programme. Overall, it improves workplace productivity and performance, boosts staff morale and is good for the long-term wellbeing of workers and their families. It also reduces pressure on health systems.’

However, ‘developing national OSH programmes requires multi-stakeholder collaboration and achieving this at country level is not easy’, according to IOSH’s spokesperson.

Ivan explains that some countries with ‘wonderful programmes, developed with a lot of international assistance, lacked a devoted OSH specialist in the health ministry, which resulted in very patchy implementation’. A programme’s success also depended upon a mechanism for monitoring its implementation that involves not only representatives from the workforce and the health sector, but also ministries of employment.

More than 50 countries have developed a national OSH programme for the health sector in the last decade and the percentage of countries with these programmes is also a WHO indicator for monitoring and evaluating responses to COVID-19. Ivan explains that countries with pre-existing national OSH programmes for health workers were able very quickly to develop standard operating procedures and other mechanisms for protecting workers from COVID-19. ‘A pandemic is an example of why these programmes are needed – health workers are exposed to multiple, interconnected risks, and any kind of shock exposes the weaknesses in the system.’

The IOSH Health and Social Care Group collaborated with the WHO and ILO on occupational health for health workers over COVID-19. The group gathers over 2000 professionals from different countries, who work in public and independent health and social care. IOSH members can support the WHO and ILO’s efforts to implement such programmes at country level.

Further information about the IOSH Health and Social Care Group and how to get involved is here. 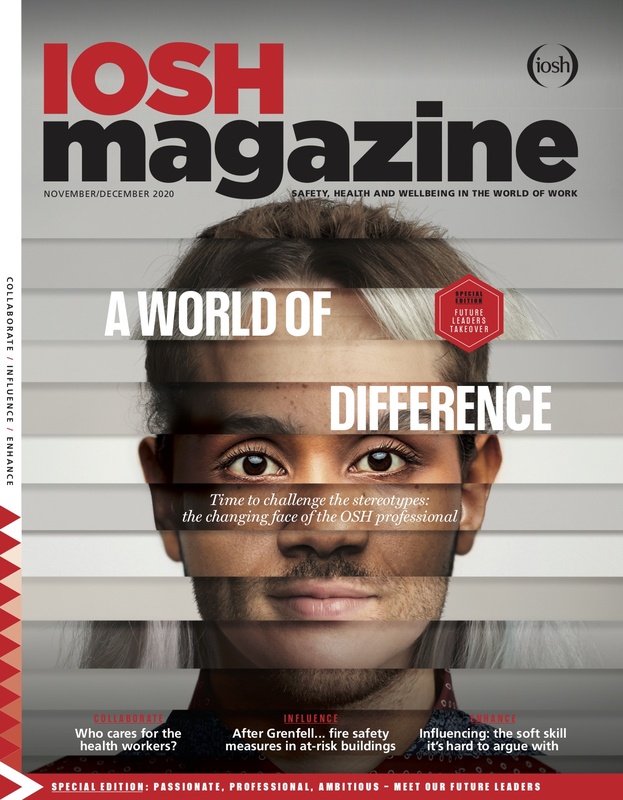 This article appeared in our Nov/Dec 2020 issue of IOSH Magazine.
Click here to view this issue
Topics:
Features