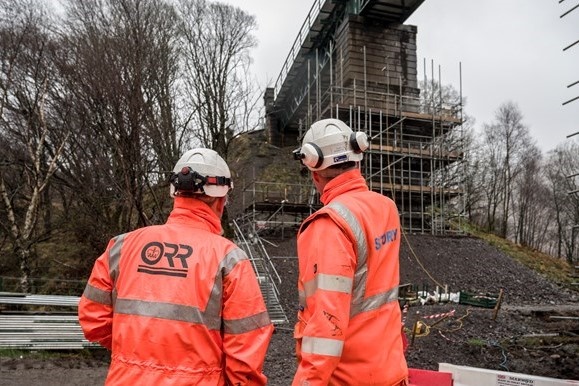 Exceptional weather conditions continue to affect safety performance, according to the latest report from the Office for Rail and Road (ORR).

The rail regulator’s Annual Report of Health and Safety Performance on Britain’s Railways shows that despite safety across Britain’s railways developing over the last 12 months, climate change has led to an increase in risks over the past year.

The number of earthwork failures and trains striking objects, such as trees, increased almost four fold compared to 2019.

Infrastructure is impacted by examples of climate changes such as hot dry summers followed by high rainfall, the ORR said, which can cause earthwork to collapse, while movement in clay embankments can adversely affect the precision layout of the tracks.

Although Network Rail has put forward plans to address climate change and increase resilience to extreme weather, ORR said these plans are not keeping up with the frequency and severity of weather events.

'Network Rail must focus more on improving identification of impending failure by means of remote monitoring and on refining the measures it has to respond to forecasts of extreme conditions,' the regulator said in a statement.

The report also found that progress has been made around level crossing safety, with a repeat of last year’s lowest-ever number of two level crossing fatalities and praised Network Rail’s long-term plan for efficient improvement to level crossings.

'There’s no doubt our railway remains one of the safest in Europe,' commented Ian Prosser CBE, HM Chief Inspector of Railways. 'There have been improvements in health and safety to the operation of Britain’s railways and this bears testimony to the great efforts made across the industry over the past decade.

'However, the last year saw significant increases in flooding, earthwork failures and trains striking trees on the line, which had a big impact on the number of delays on the network.

'It is so important that the sector employs best practice if we are to meet all the pressures on the network in the future and to make sure the railway plays its full role on climate change and reducing carbon emissions.'