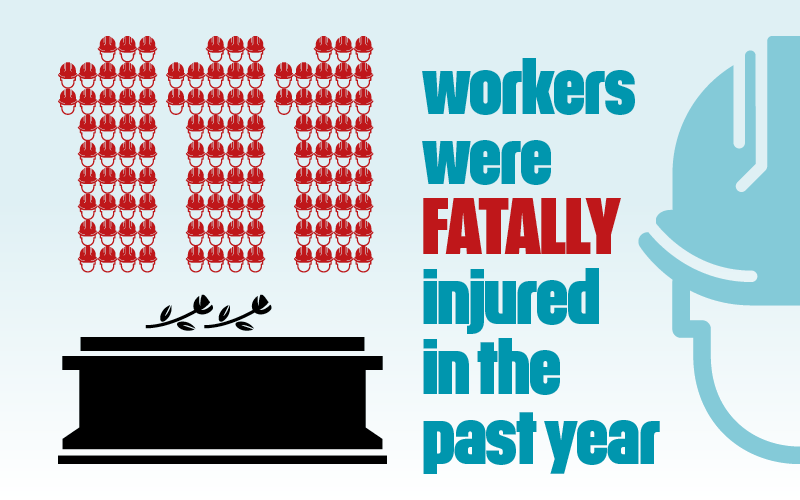 A total of 111 individuals lost their lives at work in the 12 months ending 31 March 2020, the lowest ever recorded number of workplace fatal accidents.

The HSE’s annual fatalities statistics, released on Wednesday, also revealed  a 25% decrease on the 149 fatalities in 2018/19.

However, the regulator said that the ‘striking’ year-on-year fall may not reflect a major shift in the inherent dangerousness of workplaces, and points out that COVID-19 potentially reduced the death toll by suppressing the economy in February and March.

The first 10 months of 2019/20 were already on track for a lower annual number of deaths, the HSE said, but February and March recorded a particularly low number compared to the historical average for the time of year.

The 2019/20 figures do not include RIDDOR-reportable deaths linked to contracting COVID-19 in the workplace, as these will be counted alongside other deaths from occupational disease.

'With the virus prevalent in the community at large it is very difficult to be certain that an individual case of the disease resulted from occupational exposure,' the HSE said in a statement to IOSH magazine. Cases reported are those that employers suspect could be due to an occupational exposure. 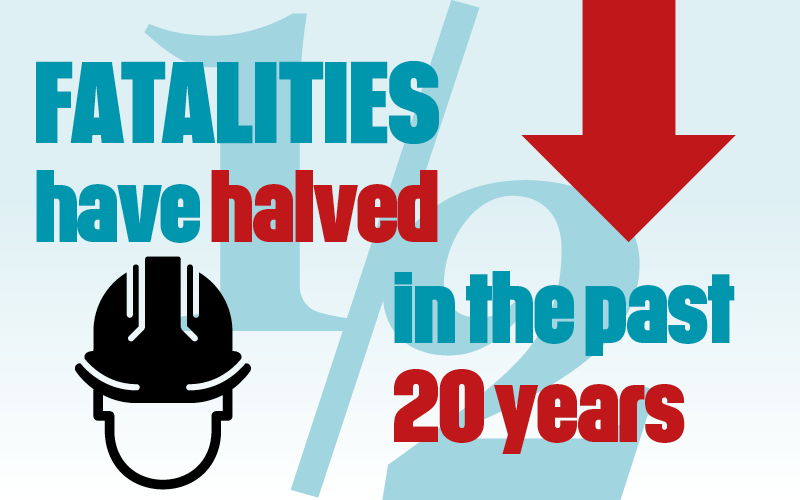 The HSE plans to publish data on work-related COVID-19 deaths ‘at a later date’.

'We want to publish this data on number of cases reported to the enforcing authorities where occupational exposure is suspected as the cause given the considerable public interest and are working hard to do so as soon as possible,' the spokesperson told us.

Following the release, the HSE’s chief executive, Sarah Albon, said: ‘In these extraordinary times, we have seen many workers risking their lives to help others during the coronavirus outbreak. Although these statistics are not a reflection on Covid-19 related loss of life, it is a pertinent time to reflect.

‘Every workplace fatality is a tragedy and while we are encouraged by this improvement, today’s statistics is a reminder that we cannot become complacent as we look to continue to work together to make Great Britain an even safer place to live and work.’

However, the statistics show a trend-defying spike in construction fatalities, with 40 recorded in 2019/20, exceeding last year’s total of 31 and the five-year average of 37.

Overall, construction deaths account for 36% of the year’s total. 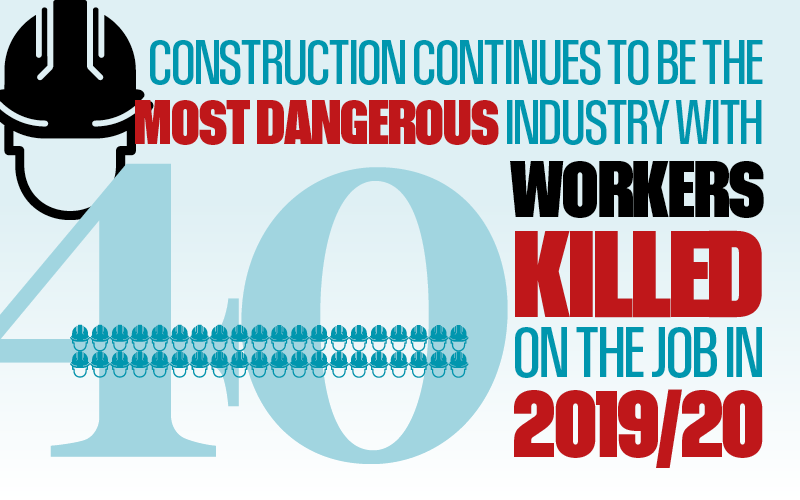 Construction was the only industry where the fatality rate increased against the previous year, reaching 1.74 per 100,000 compared to 1.31 in the preceding year.

Most other industries recorded year-on-year decreases. Agriculture, forestry and fishing, a recent accident blackspot, saw 20 deaths compared to 32 in 2018/19 and a five-year average of 27 fatalities. However, the sector still has the highest sectoral fatal accident incidence rate at 5.96 cases per 100,000.

The waste and recycling sector, also known for the wrong sort of headlines, saw five deaths compared to seven fatal accidents in 2018/19 and a five year average of nine.

Falls from height led to more fatalities than any other type of accidents, at 29 deaths. However, campaigns drawing attention to the risks may have had some effect, with a year on year drop from 40 fatalities in 2018/19.

In another noticeable decrease, deaths due to being struck by a moving vehicle, dropped from 30 in 2018/19 to 20 last year. 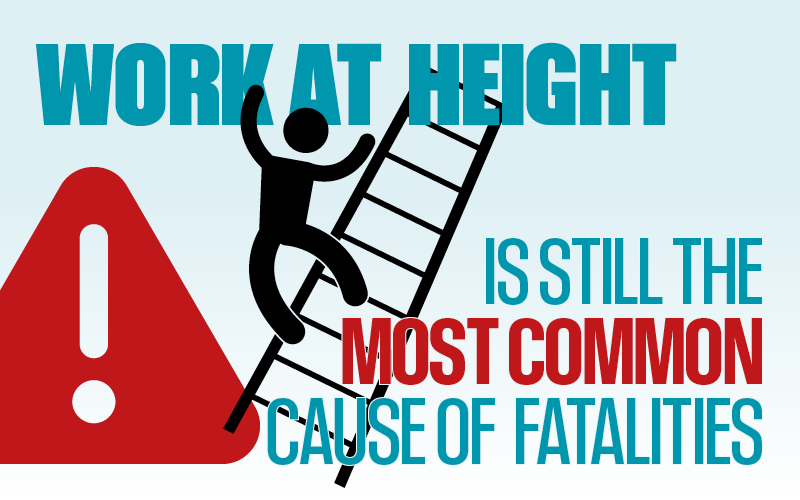 However, fatal accidents linked to being trapped by something collapsing or overturning increased to 15 in 2019/20 compared to 11 per year previously.

Fatalities at work almost exclusively involved male workers, at 108 cases out of 111, a similar proportion to earlier years.

Self-employed workers experienced double the incidence of fatal injuries as colleagues who are directly employed, but the relative risk  varies from sector to sector.

Those who are self-employed fare worse than employed colleagues in the agriculture, forestry and fishing sector, along with administration and support activities.

However, in construction and manufacturing, there is little difference in the incidence of fatal injuries per 100,000 for the two groups.

In other findings, 92 members of the public lost their lives in accidents linked to work activities: 51 people died in workplaces where the HSE enforces regulations, including 33 deaths in health and social work settings, five in “public administration” and four on construction sites.

Another 41 were killed on railways, which are enforced by the Office for Road and Rail. 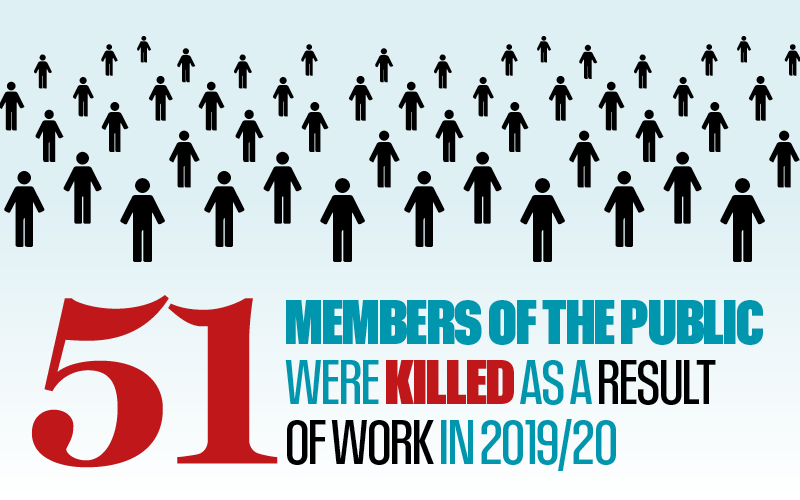 However, the figure of 92 does not include deaths in the warehouses, shops and businesses under local authority enforcement, which typically see 12 to 16 deaths a year.

The HSE concedes that it has been ‘unable to verify these cases with local authorities given the pressures on them arising from the current coronavirus (COVID-19) pandemic’.

The finalised figures for deaths among members of the public in 2019/20 are therefore likely to exceed the 92 deaths recorded in 2018/19.

Meanwhile, the statistics show that 2,446 people died from mesothelioma in Great Britain in 2018, in line with the prediction of 2,500 deaths per annum for the current decade.