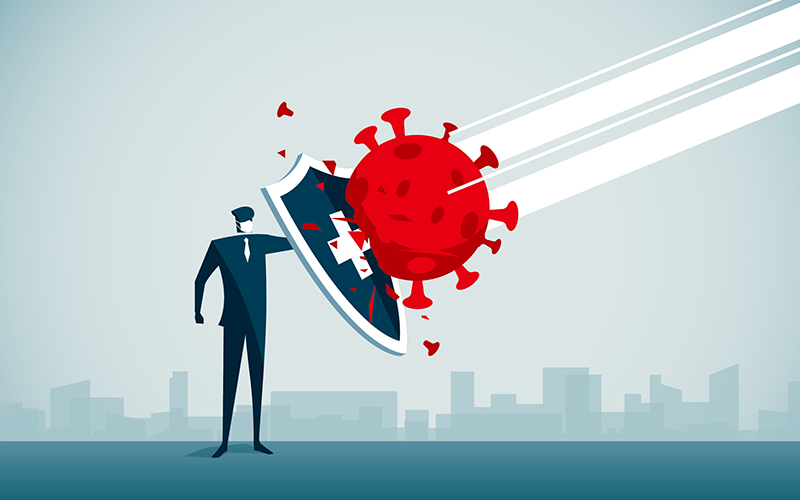 As businesses begin to get back to work, we look at ways to encourage and motivate staff to continue practising safe behaviours as the risk perception lessens.

'A leader is one who knows the way, goes the way, and shows the way,' wrote John C. Maxwell, author of many leadership books. This can often mean the leader doing the tough things first to show that they can be done. During times of crisis, true leaders quickly become apparent.

As COVID-19 launched its attack on our people, our communities and our businesses, those in charge were faced with reacting swiftly, sanely and sensibly. Some responded better to the challenge than others. Those who administered sanitising gel, checked on their employees' welfare and gave clear and concise direction had a better handle on it than those who were indecisive, doubtful and afraid to make well-informed decisions.

People in business have been hit hard as the full impact of rules and restrictions connected to the virus has launched a well-targeted attack on their systems, procedures and ways of operating in one fell swoop. Businesses and organisations with a healthy safety culture are better placed to respond quickly and appropriately.

Work environments with a culture based on distrust, poor communication and a dictatorial style of leadership will struggle more to gain worker co-operation and compliance with the heaving list of rules and mandates rained down on them as the return to work movement gains momentum.

Adopting a leadership style where those in charge and those who are following work together to create a safety culture from within, where workers feel engaged, listened to and valued is critical to achieve any type of success during and after the pandemic.

The greatest challenge for businesses now is to comply with the raft of guidelines, instructions and operational changes that are being flung at workers with lightning speed. The new rules need to be processed, understood, practised, implemented and ultimately change change behaviours to make it part of what we do every day.

There is also an expectation that the new rules are strictly adhered to at all times. This is an incredibly high goal to set and maintain – realistically this may not be achievable 100% of the time.

When our perception of risk lowers, our behaviours start to change and gradually become replaced by a more ‘laissez faire’ mentality

Risk perception dictates much of our day-to-day behaviour. As restrictions lessen on a phased basis, many of us have already jumped to the next stage.

A colleague recently said: 'I’m compliant 70% of the time, but COVID hasn’t impacted me or anyone I know so I’m beginning to wonder what is the point of it all?' This is a sentiment shared by many.

Even in countries that have been hardest hit by the virus, fewer than one person in 1000 has died, based on deaths above normal levels since March. Therefore, for many of us the virus is not real. We hear about it, we read about it, occasionally we think about it, but really it is happening to someone else who is somewhere else.

Elbow bumps instead of handshakes, standing well back from each other, avoiding touching shared surfaces like handrails, pens or paper are starting to wane. We are gradually shedding our motivation to comply on an ongoing basis.

The initial changes in our behaviour were triggered by fear. A fear for our mortality. A fear that we might suffer. A fear that someone close to us would suffer or worse still, die. That fear edged into our unconscious minds and stayed there, for a while. Fed by a continuous diet of cases confirmed, cases tested, numbers dead, we were living, eating and breathing fear.

But like most things fuelled by fear, it doesn’t last. When our perception of risk lowers, our behaviours start to change and gradually become replaced by a more ‘laissez faire’ mentality.

Recently I stood in what appeared to be a socially distanced queue at a small takeaway. Staff were frantically busy behind the well placed perspex screens, chopping, peeling, bagging and salting as they leaned their bare faces in, over and beside each other in order to work through their mounting orders. Customers initially stood back from each other, but as waiting time increased, some started to move closer to chat, one father leaned over to show pictures on his phone to a neighbour he recognised in the queue. Hands touched as they shared his phone and smiles at close proximity were exchanged.

This behaviour is not unusual – it is a realistic reflection of how challenging it is to maintain a strict set of new rules and expectations when people no longer perceive the risk as of real concern to them personally.

True leaders look at other options to encourage their people to want to behave a certain way. US adult educator Malcolm Knowles says we are directly motivated to behave a certain way if we believe it will be to our own benefit. Management thinker Dale Carnegie supported this line of thought that people have to ‘want to’ do something in order for that behaviour to continue on an ongoing basis. Most people do not respond well to direct orders.

The parent who threatens their teenage child to stop smoking or else it will damage their health will rarely succeed. The parent who takes the time to explain to their teenage child that they may never be chosen for their school football team as the coach doesn’t approve of smokers will make more impact. That’s because they understand what their child wants most: a place on the team.

Praise, encouragement and acknowledging one’s own mistakes are all simple yet effective. Praise those who are doing things correctly, focus on what went well. Be specific in your praise. Appeal to people’s higher motives.

If we are serious about embedding behavioural changes into our everyday life, we must remember that working together is the only way to make it permanent. It is pointless calling out a set of rules to staff and expecting immediate compliance. Workers will simply revert back to the way things used to be when left unsupervised.

Embedding a safety culture takes work, patience, persistence and wisdom. It is a time to be creative, to be understanding and to praise and acknowledge positive behaviour.