The Human Detector a World First in H&S 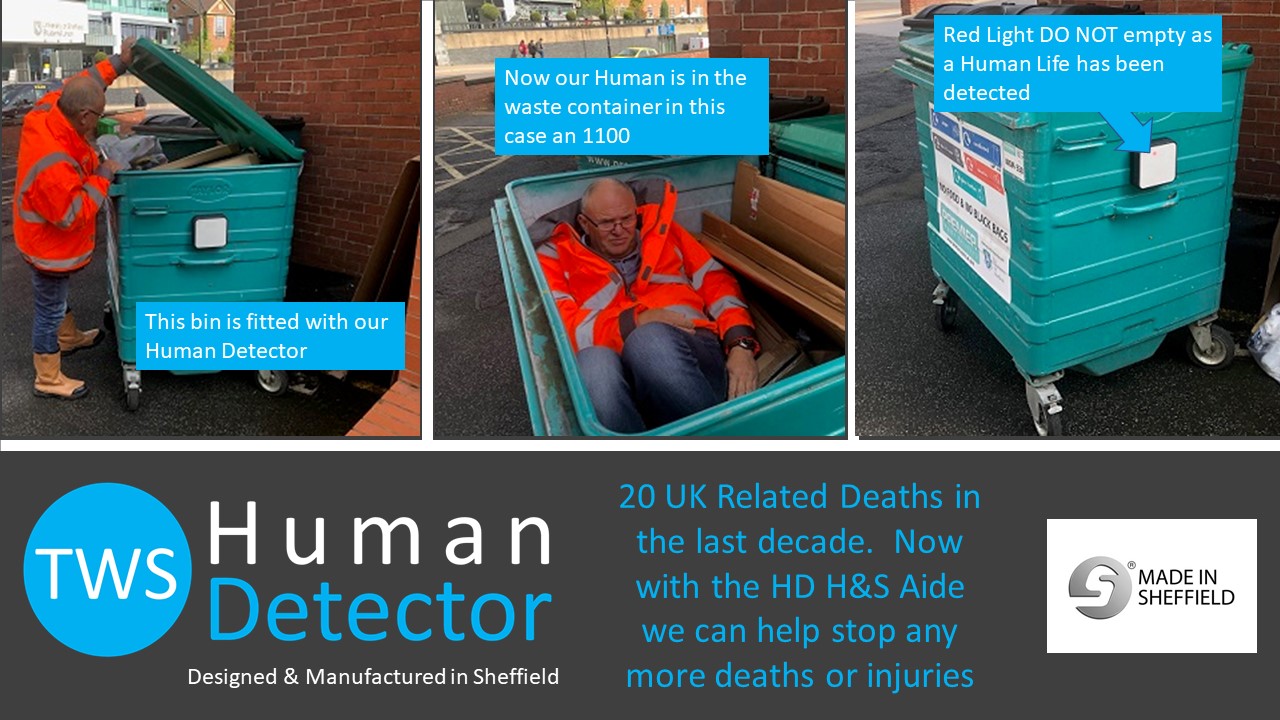 Drivers confronted with people in a bin every day, sometime there’s unpleasant verbal & physical abuse.  20 deaths in the last decade, locks don’t stop this. The Human Detector the new H&S aide for the driver to protect them & to help stop future unnecessary injury & death.

The Human Detector is the next tier in Health & Safety for the Waste Industry, whilst bins have locks they get broken, left unlocked, having this unit means that even with lock failure there is a device to protect both the sleeper in the bin and the driver, a lock doesn’t have this functionality to prewarn the driver of a hazard, which adds value all round.

Homelessness across the globe is on the rise 70% since 2014 in the UK.  In the last decade there have been 20 UK related deaths, following that person taking shelter in a bin.  Typically, the deaths are related to the homeless but of those 20, 7 were on a night out.  With the most recent incident still under investigation being just last month in London

The drivers encounter finding people in bins on a regular basis and it can be a frightening experience for both the driver & the bin occupant.  Drivers report both verbal & physical abuse.

The Human Detector is a world first, designed & manufactured in the UK, to combat & help stop these very real daily occurrences.

This simple but effective device negates the need for the driver to kick the bin, which is often the cause of why the person asleep in the bin becomes agitated. Now with a gentle knock the unit which sits on the side of the bin will come to life with a Green or Red Light.  Green means no life detected, Red a life has been detected.

Having this function means the driver is prewarned of a potential hazard ahead & the person in the bin has been detected so is no longer at risk of serious injury / death or frightening experience.

Working with the waste companies the data collected from where a red light triggers on the Human Detector will be shared with homeless organisations, so those who are vulnerable can be located to get the help they need.

In addition the sold units will provide a circular chartable economy, part of the profits being donated to local homeless charities.

The technology has been designed around the functionality of detecting a human climbing in and settling in the bin & how the unit should function for the driver.  The automatic reset on bin lift is much liked by those drivers now using the HD.  Another key factor which has been overcome is the cost of the unit at under 3 pence per day.

Drivers in the Waste Industry have welcomed the Human Detector & in some cases have even championed this new technology. A quote from a driver who had firsthand experience of being involved in accident said “we should have had this years ago”.

Now in production & on our streets the Human Detector helping to make life better for the drivers & of course what price do you put on life?