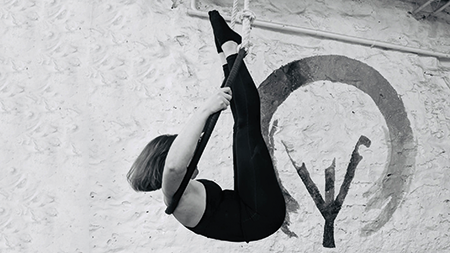 I’m not great when it comes to going to the gym. I find it fairly repetitive and tedious, so I’ve always done classes to keep fit. A couple of years ago, the teacher who took most of the classes went on maternity leave so someone suggested we try going to an aerial studio.

The first thing I tried was aerial silks, where you use two lengths of fabric that are rigged from the ceiling. I quite enjoyed it, but then tried aerial hoop and that was a lot more fun!

Aerial hoop is a circus activity that involves performing acrobatic moves on a steel hoop suspended from a beam clamp. As well as being really enjoyable, it’s a great way to stay fit. At first I thought it was a fairly niche activity, but there are lots of studios around and two in the city where I live. But aerial hoop isn’t widely known about, so you have to seek studios out.

Hoop relies on strength and flexibility. When you first start doing it, it can be quite tiring. The first challenge is to learn to pull yourself into the hoop, which involves inverting and hooking your legs onto the hoop. You’re taught that when you grip the hoop, you must always have your thumb wrapped around it – rather than alongside your fingers – as that creates a stronger hold.

I do one class a week and also practise inbetween classes at open sessions. I do go on my own, but sometimes you need someone to ‘spot’ you on the ground when you’re practising a move, just in case you tip and fall out of the hoop. Even at the open sessions, there are instructors to rig up and so on. Instructors have completed aerial rigging courses – being an oil and gas safety professional, one of my first questions on attending the first class was about the certification of the equipment and the Lifting Operations and Lifting Equipment regime!

It makes you challenge what you think you are capable of; it’s about getting those skills back

When people find out that I do aerial hoop in my spare time it’s often met with a fairly surprised “Really?”. I can’t help bringing my day job into my hobby – if someone needs to install equipment we foot the ladder. Obviously we don’t have PPE when we’re doing aerial hoop, but if you look at the hierarchy of control, we rely more on collective protective measures, such as crash mats – which won’t stop you falling, but will hopefully stop you being injured. Before my first session I had to fill in a form about injuries and other issues that might affect my ability to take part, and at the start of each session the instructor asks if anyone has sustained a recent injury that they might need to keep an eye on.

At work we talk a lot about hazard identification and the need to be aware of our surroundings and the people around you. It’s the same with aerial hoop. You can’t zone out: you have to be completely focused on what you’re doing.

Aerial hoop is good exercise but one of the great things about it is that you don’t feel like you’re exercising. I enjoy the progression too. When you learn a new move, at first you think, “I can’t do that – it’s impossible!” Then a few weeks later you try it again, something clicks and you see your progress. I also enjoy working in a group and putting together a routine. At the studio we put on a couple of showcases each year.

I would recommend anyone who’s interested to give it a go. When suggesting it to people I know, they’ll often say, “Oh, but I’m not flexible” or “I’m not strong”, but that’s why you go! All you need is to be comfortable with heights and being upside down, and be willing to try something new. Watching instructors when I first started reminded me of being on a climbing frame as a child – hooking your legs and hanging upside down. It makes you challenge what you think you are capable of; it’s about getting those skills back.

As a health and safety adviser, you can be creative in your work and enjoy it, but it’s not about play. Aerial hoop gives you the freedom to play. You can slowly retrain your body and your mind – and you realise what’s achievable. It’s the same at work. We all come to work with our own values and preconceptions about how tasks can and should be carried out. Through discussion and continued assessment we can challenge ourselves to consider a different point of view – and still work with the health and safety of the team at the forefront of our minds. 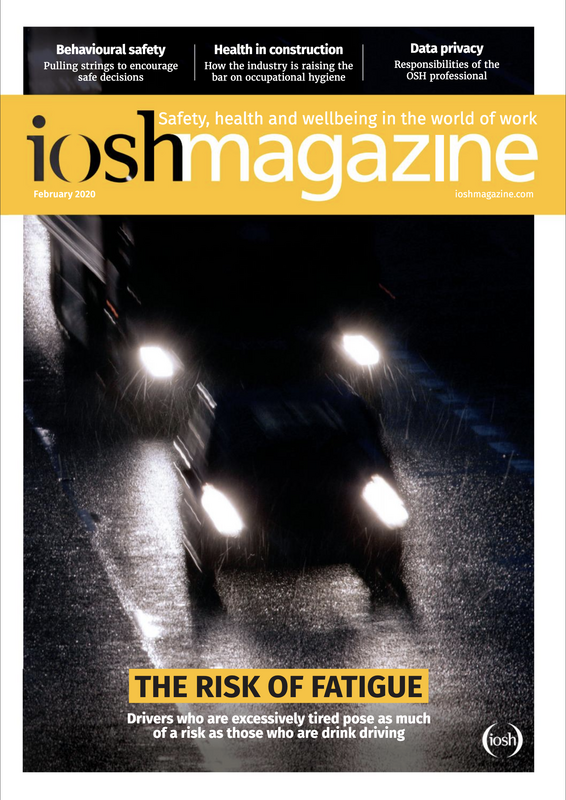 This article appeared in our February 2020 issue of IOSH Magazine.
Click here to view this issue
Topics:
Off duty