Nightclub fined over death of reveller who fell 40ft 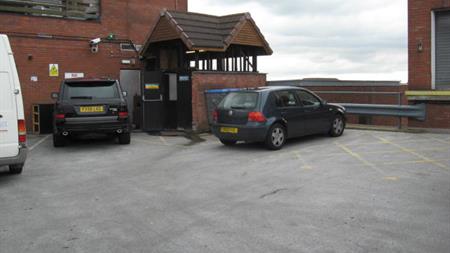 The manager of a nightclub where a man plunged 40ft to his death when he fell over a “low level” barrier has been prosecuted.

On Saturday 19 August 2017, at approximately 2.45am, electrician Ryan Shenton stumbled over a 2.6ft-high barrier while in a “considerable state of intoxication”, Stafford Crown Court was told.

The 25-year-old fell 40 ft to his death from the car park area at the rear of what was then the Quartz Nightclub in Church Street, Cannock (see picture, below). Shenton left the club via the exit leading out onto the second-floor service area and went unnoticed by door staff as he did so. It is not known how Shenton came to fall but his body was discovered later the same morning at around 8.30am by three members of staff carrying out security checks on the rear courtyard of the Barclays Bank branch.

Investigators said there was a “poor safety culture” at the premises, where customers routinely exited the club through a door on the second floor onto the car park overlooking Cannock Shopping Centre below.

Mark Harrison was the registered company director and company secretary of Quartz 23. He had operated a nightclub from the premises for a number of years under different entities. Gemma Williams was not a director, but as well as being the lessee of the premises she described herself as being in charge of managing the club, being in partnership with Harrison and having the day-to-day running of the club. She was also the designated premises supervisor under the Licensing Act.

Quartz 23 admitted contravening s 3(1) of the Health and Safety at Work Act in that it failed to conduct its undertaking in such a way as to ensure, so far as reasonably practicable, that persons not in its employment were not exposed to risks to their health and safety.

Judge Michael Chambers QC sentenced Quartz 23 to a fine of £14,000 and a contribution of £10,000 towards Cannock Chase Council’s legal costs.

Harrison and Williams pleaded guilty to contravening reg 3(1)(b) of the Management of Health and Safety at Work Regulations, by failing to make a suitable and sufficient assessment of the risks to the health and safety of persons not in their employment.

“There was a poor safety culture at Quartz which resulted in little regard for the health and safety of those affected by its undertakings," said Environmental Health Officer Laura Nichols, who led the investigation for Cannock Chase Council, which brought the prosecution. "There was no health and safety policy in place, no allocation of responsibilities for health and safety and inadequate arrangements in place for assessing significant risks. There was no consultation with employees and no ownership or direction of health and safety by senior management.”

The Council’s cabinet member for health and wellbeing, Councillor Christine Martin, said Shenton’s death might have been avoided had the owners of the nightclub business had in place a health and safety policy and undertaken the necessary risk assessments to help anticipate the circumstances that led to this fatality.

"The Council expects owners and managers of venues to ensure that all patrons are kept safe," she added. "This is best done by carrying out suitable risk assessments and having well trained staff who are able to put into practice the necessary safeguards to avoid tragic situations like this one, in the first place.”