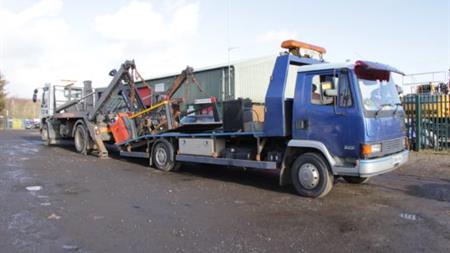 A Carlisle auto-salvage company has been fined after a customer was fatally crushed when a lift truck he had purchased was being loaded onto his own recovery vehicle.

On 15 February 2018, a lift truck purchased from Michael Douglas Autosalvage was lifted using the company’s skip lorry onto Paul Spence's recovery vehicle. The metal ring on the lift truck that the winch wire was attached to failed, causing the lift truck to fall and trap Spence against the skip lorry. The 64-year-old died at the scene.

Health and Safety Executive (HSE) investigators found that the company had failed to ensure that this complex lifting process was properly planned by a competent person and that it had failed in its duty not to expose customers to risk.  A competent person would have identified that this loading method with this equipment was fundamentally unsafe.

Carlisle Crown Court was told that adequate lifting plans had not been put in place before the men began loading the forklift on to the lorry.

Michael Douglas Autosalvage admitted breaching s 3(1) of the Health and Safety at Work Act. The company was fined £23,000 and ordered to pay costs of £8,000.

Commenting on the case, HSE inspector Matthew Tinsley said: "This incident could so easily have been avoided should the lift have been properly planned and appropriate equipment and safe working practices been employed as a result."