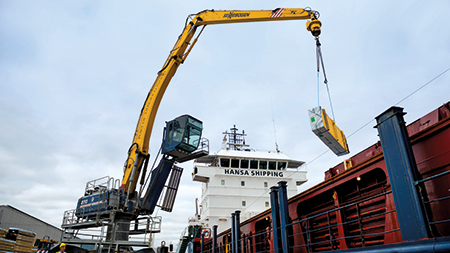 As manual handling has given way to mechanisation at the UK's ports, so the number of accidents has fallen. But the introduction of more mobile equipment, such as cranes and forklift trucks, has brought different risks. No matter what the ports are used for (see 'Types of UK port' box below) -- and 95% of the UK's trade passes through them -- collaboration and sharing of good practice are critical to safety management.

The industry recognised this in 1972 when its Accident Prevention Officers Group first met. The group evolved into Port Skills and Safety (PSS), set up to monitor the industry's safety performance and produce tailored guidance with industry players, trade unions and the Health and Safety Executive (HSE). Although the HSE has not classed ports as 'high-risk', the PSS adopted the regulator's approach to managing risk when it produced its own sector plan (see 'PSS sector plan' box).

Just as PSS's industry-wide statistics show a fall in injury rates, the rate for one of its member operators, Forth Ports, has dropped 63% over the past 10 years, though there continues to be too many people injured. Forth's geographic range stretches from the massive Port of Tilbury on the Thames Estuary to a cluster of ports on Scotland's east coast.

To improve safety, Forth has invested in new vessels, plant and equipment to the highest standards, often requiring manufacturers to upgrade and develop their offering. The equipment involved ranges from heavy plant to the systems used to manage shipping on the water -- a bit like air traffic control in slow motion.

In 2013, Forth launched the first phase of its initiative 'Safety F1rst: 1 Team, 1 Goal'. This introduced a new approach to logging incidents, observations and inspections in an upgraded software package. It standardised safety communications and developed a plan to bring under a single system the three separate safety management systems for the Scottish ports, the Port of Tilbury and the London Container Terminal.

But to be successful in safety, health and environment (SH&E), you need to be capable of driving change. Although many at Forth were comfortable with the procedures they had, the company decided to update the safety management system documents into one group-wide system. To accomplish this smoothly, consultation was essential. Some in the SH&E team needed to learn that talking informally enabled everyone to open up and voice concerns. Finally, for the first operational procedure, key people from across the business spent a day together examining the draft version. It built trust and understanding that, although some things needed to change, all parties were trying to achieve the same goal and prioritise safety.

The group health, safety and environment manager set up 45-60 minute sessions with frontline employees to explain basic safety information (recent incident data and the plan for the next few years). Small group sessions held with supervisors built on these. In 2018, seminars and workshops were used to seek inputs that led to the development of lifesaving rules, which will be introduced in 2020.

In 2019, the second phase of the initiative kicked off with a different approach to engagement, using a 'stand down for safety'. The company hired a video production company, script prompts were written and the group health, safety and environment manager and chief operating officer recorded pieces to camera around the business. The main purpose was to launch phase 2 of Safety F1rst: 'Let's Make Injury Unacceptable in our Business'. The wording was informed by the engagement in 2018, which had shown an acceptance from the frontline team that 'accidents happen' and 'people will always get injured'. That did not fit the approach or beliefs of the management team, or indeed the board of directors, and had come as a bit of a shock.

Throughout this period, Forth has been conscious of a need to build trust and improve transparency. For example, at the 'stand down for safety' briefing, the company announced it planned to move from traditional hard hats to those that met industrial and climbing helmet standards. The announcement was communicated to all employees that the organisation was looking at head protection, and why. An update followed, explaining the enhanced protection and the news that the company had identified a shortlist of brands that provided improved protection, good adjustability and overall comfort. The company then trialled two helmets across the business, evaluated the feedback, and decided on the final product. The new hard hats were being issued at the time of writing.

This approach builds trust: Forth told everyone what it was going to do, updated them on the process, and delivered on it. This is one example of 'saying what you mean and meaning what you say': avoid over-promising, and set and manage expectations.

The feedback from 'stand down for safety' was clear: that the workforce wanted to directly input safety observations into the safety software, and wanted briefings refreshed so they were more impactful.

Forth then set up two cross-functional teams to respond to these requests. The IT team and SH&E team worked on the software into which all employees can submit observations from kiosks, most of which are being installed in welfare areas. The SH&E and learning and development teams took findings from focus groups, both from those who delivered the briefings and from those who received them. Recommendations on how to improve briefings are now with the chief operating officer.

To influence a workforce with such longevity, it is no longer effective to scare people into compliance

It is dangerous to think that anyone has all the answers. An advantage of PSS is that different ports share their safety information freely, whether through alerts, learning points, innovations or experiences. Indeed, the chief executives of the UK Major Ports Group have agreed to share safety information openly and transparently. This positive approach drives improvement and learning from others. Learning in meetings and through electronic sharing is encouraged; Forth visits other ports (as well as the PSS events) to learn about different approaches, for example. Learning can also come from outside the industry. These visits have grown networks and stimulated new ideas, both for Forth and the organisations it has visited or hosted.

It is relatively easy to be a safety or environment professional who focuses solely on compliance, although it is, perhaps, not the most effective way to court popularity. As long as you have the technical knowledge to highlight what is wrong, the role can be fulfilled. However, this binary approach may do little to achieve buy-in, which usually requires a more nuanced approach.

Forth's target is to be industry-leading at the end of the five-year plan that accompanies the second phase of Safety F1rst. Given the nature of the work, environment, history and length of service of many employees, to have impact there is a need to influence people; and not by talking at, or lecturing, them. Many employees have worked their entire career at Forth Ports: 25, 40, even 50 years' service are not uncommon. To influence a workforce with such longevity, it is no longer effective to scare people into compliance. There is a long corporate memory, and there are many with long personal memories.

The human brain takes in vast quantities of information at any one time, but consciously processes only a fraction of it. This explains why people can have different recollections of the same experience, whether spotting hazards in the workplace, writing a risk assessment or providing a witness statement. Traditionally, the SH&E professional would reflect on a situation and (with the benefit of hindsight) opine on what went wrong and why. That often falls into one of two causes: someone made a mistake and needs retraining, or the system let this person down and it is therefore the 'fault' of the company or a manager (often the position taken by a regulator or claimant).

Ultimately, if someone has been hurt, something has gone wrong. The reasons may vary: it could be that technology failed (not as common as many suggest); the system was wrong or was not followed (perhaps because it was written from an office or theoretical perspective, or something unintended or unforeseen changed on that day); or someone made a mistake, violated a rule or procedure, or had a momentary lapse in concentration.

Forth has found that there are three explanations for most of its incidents, of which one or more may be valid: incorrect decision-making, lack of awareness of hazards, or inattention. It seems the volume of information our brains process could be relevant. Most people reading this are probably focusing 20% on the article and the rest are thinking about the context of previous experiences: how this fits with your preconceptions, and therefore deciding whether you like what you are reading and whether it is useful.

Add these facets together, and it becomes clear that working to resolve unintended mistakes is a challenge. It can also be a challenge to accept that the mistakes many people make may be unintentional, either because they have become conditioned to make them by their surroundings, or because they have not consciously processed the hazard or situation, leading to a decision that may have made sense to the individual at the time but does not with the benefit of hindsight.

This is where coaching can help. Instead of the customary finger-wagging and clipboard-wielding, SH&E professionals, supervisors and managers should engage in thorough conversations about risks, hazards, aspirations and motivations. The elements that the brain selects to consciously process can evolve based on experience. Part of this process is holding genuine and meaningful conversations, making the workplace safer. If those with a relatively mature safety culture want to improve further so that everyone goes home safe, there needs to be a focus on the softer skills -- in the SH&E team initially, but mirrored in the supervisory and management grades.

The value here is the ability of SH&E professionals to empathise, understand, and build relationships and trust. Once there, the scope to influence, guide and help is improved. This is where the impact comes -- but only if the business does, and wants to, comply.

IOSH has refreshed its competency framework (bit.ly/2BVn8ZU) to include more emphasis on soft skills to sit alongside technical understanding. These soft skills can include the ability to listen, to communicate clearly and concisely, to work collaboratively to reach a common goal, and, critically, to display leadership. If you break the rules you advocate, you are not displaying leadership: say what you mean and mean what you say.

This is where PSS, with its whole-person approach, and Forth are now recognising that, to continue the Safety F1rst journey, they need greater engagement and genuine safety conversations. To deliver that effectively, a coaching approach is required. 'Stand down for safety' is a success because it is now delivering what was promised, based on listening. These soft skills are therefore critical, and the company will develop them as part of any future SH&E recruitment process.

Most can quote the rule book. But the important skills are the ability to listen and a willingness to accompany everyone along the journey, so that they feel empowered and want to comply, make suggestions and feel part of the team with one goal -- 'to make injury unacceptable in our business'.