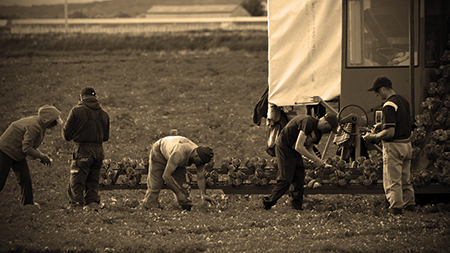 Modern slavery is on the rise in the UK, and with it the impetus to take action (see 'IOSH calls for action' box, below).

If your organisation is part of a supply chain, it is likely that the Modern Slavery Act 2015 affects you. With proposed changes to the legislation out for consultation, businesses would do well to improve their understanding of the issues, and of the risks involved if they fail to act.

If exploitative labour is found in a company's supply chain, reputational damage, the loss of customer confidence and diminishing market share may result. The business could even face legal sanctions if its suppliers or contractors are involved in illegal conduct. On the other hand, a record of ethical procurement activity can encourage investment and improve employee morale.

Modern slavery encompasses a range of human rights abuses: from forced labour, bonded labour and human trafficking to servitude and child labour. Victims of modern slavery are unable to leave their place of exploitation, and are controlled by threats, punishment, violence, coercion and deception.

Modern slavery in wealthier nations such as the UK is particularly lucrative for traffickers. Chronic skills shortages, and falling numbers of EU workers since the referendum on Brexit in 2016, have exacerbated the problem.

The nationalities most at risk of modern slavery in 2017, according to the UK government's National Referral Mechanism (NRM), were Albanian, Chinese, Nigerian, Vietnamese and, surprisingly, British.

Many foreign workers are unaware of their rights as employees, and may be unable to communicate because of language restrictions. There are also clear links between trafficking, modern slavery and homelessness, charities have found.

Since slavery can take many forms, ranging from a refusal to provide holiday pay to imprisoning workers, it can be difficult to spot, and the individuals could be working in legitimate businesses.

Construction ranks second only to the sex industry as the sector most prone to exploitation, according to a report last year from the Chartered Institute of Building (CIOB). Other industries identified as most at risk in the UK include agriculture, hotels and restaurants, care homes, car washes, cleaning and nail salons.

Private companies with a turnover of more than £36m a year fall under the Modern Slavery Act. Under s 54, these organisations must publish an annual 'slavery and human trafficking statement' on their website, setting out the steps they have taken to ensure goods produced, or services provided, by their suppliers and contractors are free of modern slavery. Therefore, you should be asking your contractors and suppliers to disclose their policies and provisions to tackle this issue.

At present, it is compulsory only to publish a slavery and human trafficking statement, and it is acceptable for companies that meet the threshold to say they have not taken any action.

The Modern Slavery Act was considered groundbreaking when it came into force, but critics say that the lack of enforcement penalties has led to low levels of compliance and a lack of true buy-in from senior leadership.

In fact, an independent review of the legislation, commissioned by the Home Office, found that around 40% of eligible companies do not comply with it. The Home Office's final report, published on 22 May, made 80 recommendations to strengthen the laws.

The government responded in July, agreeing with most of the suggested amendments. It also issued a public consultation to collect feedback on the proposed changes (see IOSH box, below).

The government accepted many of the recommendations on enhancing transparency in supply chains. For example, it intends to set up a single reporting deadline to identify those not reporting and to publish an online register on which all statements would be submitted, recorded and made publicly available.

The government also agreed that public authorities, as well as listed companies, should publish a statement if their annual budget exceeds £36m. This should drive up compliance rates, and the quality of statements from companies wishing to win public contracts.

However, the government has not committed to automatically banning any company that fails to comply with s 54 from winning public contracts. It notes only that there are processes in place to identify such companies, and that refusal on these grounds is permissible.

The government also rejected the recommendation that it should impose sanctions on companies that fail to respond when instances of modern slavery arise. And it has not committed to removing the clause under s 54 that allows companies to report that they have taken 'no steps' to address modern slavery and human trafficking.

However, in an interview with Thomson Reuters Foundation in August, Sara Thornton, the UK's independent anti-slavery commissioner, said: "Civil sanctions is something we need to move towards. If you are sitting on the board of a big company and don't get GDPR [General Data Protection Regulation] right, or health and safety right, then there are big sanctions."

Thornton said holding businesses to account, strengthening law enforcement and victim support would form the backbone of her strategy, which is set to be published shortly.

In July, police broke up the UK's largest modern slave ring, involving 400 workers trafficked from Poland. After a four-year investigation, eight defendants in two trials were found guilty of their involvement.

Successful prosecutions such as these are making both the public and potential service users increasingly aware of bonded labour and human rights issues in supply chains. They are supporting -- if not demanding -- that businesses act to implement ethical sourcing programmes. The moral obligation to stamp out modern slavery is ramping up, and failure to take effective actions across your operations and supply chains is likely to attract bad publicity.

As we await the legal outcome of the review of the Modern Slavery Act, the legislation has been gathering momentum of its own accord. Eligible organisations are expected to build on their transparency statements year on year, and more companies that fall below the £36m threshold -- along with organisations in the public sector -- are voluntarily providing transparency statements, and quizzing their contractors and suppliers about their approach to modern slavery.

In September, the Cabinet Office announced new measures to ensure government supply chains are free from modern slavery. This took the form of new guidance, a digital tool and a training package to tackle the problem, with actions taken by departments to inform the government's first modern slavery statement due out later this year.

In the construction sector, the common assessment standard (CAS) -- a new pre-qualification system based on an industry-agreed question set, delivered by assessment bodies including CHAS -- features questions around the Act.

The CAS represents a big step forward for the construction industry, not just in improving efficiency and reducing costs within the construction pre-qualification process, but also in helping to ensure that issues such as modern slavery are addressed as standard.

To stay ahead of the curve, businesses would be wise to underpin transparency statements with rigorous risk-mapping of their operations and supply chains, and commit resources to identifying and remedying abuses (see 'Best practice' box).

Improving collaboration across the sector in which you operate will ensure your business is not merely compliant with the legislation, but well placed to develop and implement a proven approach to tackling modern slavery.

IOSH is running a Modern Slavery CPD course at the Grange on 5 February. For more information, click here.