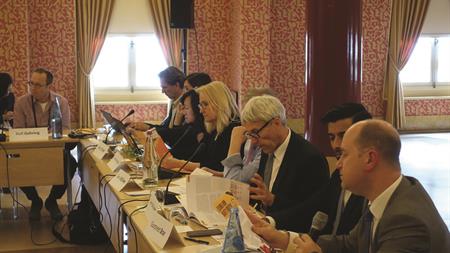 The main focus was on the growing threat of non-melanoma skin cancer (NMSC), which occurs after exposure to solar UV radiation and is a particular risk to outdoor workers and those with fair skin and blue eyes, whose levels of protective melanin are lower. An estimated 2-3 million cases are identified every year, making NMSC one of the world's most commonly diagnosed forms of cancer. It was responsible for 65,000 deaths in 2018.
Although the WHO classifies ultraviolet radiation (UVR) as a group 1 carcinogen, it is rarely highlighted as a major risk factor and many countries have yet to recognise it as an occupational disease. WHO radiation programme team leader Emilie van Deventer led a discussion on the risks of NMSC to outdoor workers.
In the European Union, more than 14.5 million workers are regularly exposed to solar UV radiation for more than 75% of their daily working hours. It is estimated that the burden of occupational skin diseases costs more than €5bn a year.
However, a lack of reporting and accurate data has allowed this crisis to remain in the shadows, the summit was told. Currently, the EU lacks the legal powers to protect workers at risk of developing NMSC.
Professor Swen Malte John, who chairs the European Academy of Dermatology and Venereology (EADV) Task Force on Occupational Skin Disease, led the debate on how to end what he called the NMSC "epidemic".
The summit discussed how legislative improvements could be introduced to improve protection of outdoor workers, including better mandatory reporting, greater access to regular screenings and more effective treatments.
The discussions outlined the scale of the burden of occupational skin cancer, its estimated economic costs, examples of good practice, and inconsistencies in reporting and diagnosis. Promising uses of artificial intelligence to diagnose skin cancers quickly were also highlighted.
ICOH president Dr Jukka Takala presented up-to-date epidemiological evidence from his own research and other data to map out the scale of the challenge. He proposed six "vision zero" steps that could help to eliminate 90% of skin cancers:
&bullet; Ethical responsibility by employers, regulators, trade unions and experts -- leadership and commitment by stakeholders.
&bullet; Identify exposed groups -- hierarchy of risk control.
&bullet; Define targets -- develop programmes.
&bullet; Ensure a workplace and national safe and healthy system -- be well-organised.
&bullet; Improve qualifications -- develop competence.
&bullet; Invest in people -- motivate by participation.
IOSH was invited to introduce a roundtable discussion on best practices in prevention and care and showcased the solar radiation phase of its No Time to Lose campaign.
This focused on how IOSH has worked with its members and campaign supporters to develop an approach that combines awareness-raising with practical strategies and tactics, and a network of pledge signatories who devise and implement ways to change workplace attitudes and behaviours to reach those most at risk.
Dr Gerry McElwee, head of cancer prevention for Cancer Focus Northern Ireland, co-moderated the discussion that followed, featuring global perspectives.
Australia and New Zealand have the world's highest incidence of skin cancers, and have worked hard to raise awareness of safety in the sun. The Antipodean countries lead the world in awareness-raising to change behaviour, which started with the slip-slop-slap campaign in Australia in the early 1980s (slip on a shirt, slop on the sunscreen, slap on a hat).
Professor David Whiteman, senior scientist and deputy director of the cancer control group at QIMR Berghofer Medical Research Institute in Brisbane, said incidences of skin cancer in Australia and New Zealand were dropping.
Firms with large numbers of outdoor workers now take steps to ensure they cover up. He also indicated that greater awareness of how occupational exposures can be linked to cancer has resulted in some workers, who were not offered protection against UVR in the past, taking legal action against previous employers.
Delegates from France, Germany, Greece and Italy shared their own experiences of how cancer prevention is approached in those countries.
Dr Marc Wittlich, of the Institute for Occupational Safety and Health of the German Social Accident Insurance (IFA), described an initiative being launched in Germany on the same day as the summit. This taught occupational safety to nursery schoolchildren with the help of a popular children's songwriter.
The summit's hosts took the opportunity to issue a global call to action and a new white paper examining the disease burden of NMSC.
Swen Malte John said: "In light of a growing non-melanoma skin cancer epidemic, it is of the utmost importance that everyone -- from governments to employers and health professionals -- works together to ensure that outdoor workers are no longer forgotten.
"Action is urgently needed across Europe to improve NMSC prevention and access to treatment, as well as to step up screening efforts."

He said avoiding the most intense sunshine in the middle of the day can make big differences to worker safety and endorsed the value of campaigns such as No Time to Lose.

The European Academy of Dermatology and Venereology (EADV) Task Force on Occupational Skin Disease brought together representatives from research, government policy, clinical practice, non-governmental organisations, social security agencies, trades unions and OSH organisations to direct their attention to work-related skin cancer.
Representatives from the World Health Organization, the European Commission, IOSH (presenting its solar radiation phase of the No Time to Lose campaign), EU-OSHA, and a coalition of patient groups and medical organisations gathered with the EADV and fellow summit co-hosts, the International Commission on Occupational Health, the European Cancer Organisation, the European Cancer Patient Coalition, the European Cancer Leagues, European Dermatology Forum, and International League of Dermatological Societies as part of the four-day 15th Congress of the European Association of Dermato Oncology at Paris's Maison de la Chimie near the French national assembly.
Other participants travelled from Australia, South Africa and the US to provide advice and share experiences and insights to inform efforts to improve skin cancer protection in the workplace.
Topics
News
Wellbeing
Occupational cancer
Hazardous substances
Radiation
Construction