The view from the summit 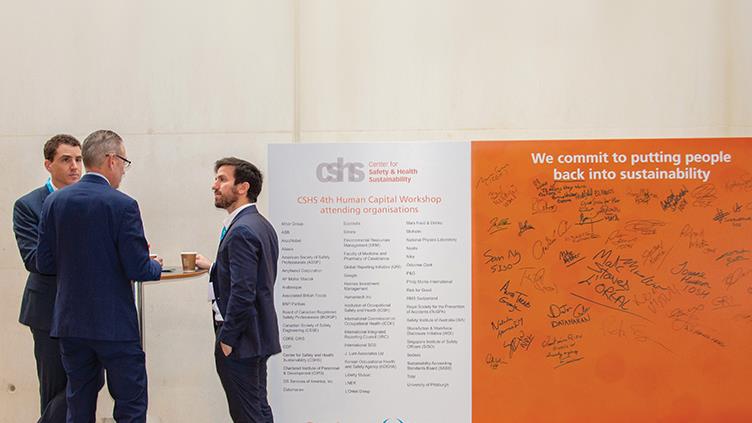 "We are at a research and development moment in the field of human capital," said Mike Wallace, advisory council member of the Center for Safety and Health Sustainability (CSHS), at the opening of the organisation's Human Capital Project - Global Summit on 3 April 2019.

The summit, sponsored by IOSH -- one of the center's founding members -- and hosted by L'OrÃ©al at its Paris research campus, brought together 75 delegates from around the world to discuss the place of safety and health performance and reporting in corporate social responsibility (CSR) programmes. A series of panel discussions covered the priorities of investors, employers and professional bodies, and looked at whether a human capital approach, which sees workers as a resource, is material to organisational success and sustainability

"There are a lot of companies where they talk about external corporate social responsibility or the environment but they seldom talk about their own people," said L'OrÃ©al's corporate health and safety director, Malcolm Staves, in his welcome.

"I know there are many of you who don't like the term 'human capital'," said CSHS chair Kathy Seabrook, kicking off the first panel, representing the OSH practitioner bodies, "but that's the language of the investment community." (For more on the human capital approach, see Seabrook's interview, IOSH Magazine, October 2018: bit.ly/2UG2nfR)

"For too long we have concentrated on health and safety processes over people," said panellist and IOSH president-elect Andrew Sharman. "When we reposition people at the heart, that ensures the sustainability of human capital in workplaces." 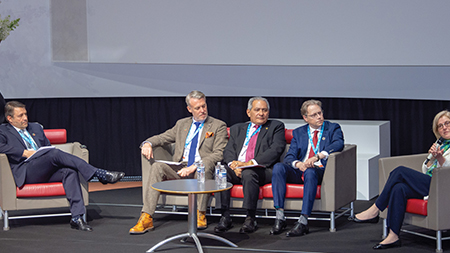 On a similar note, Trevor Johnson, president of the Canadian Society of Safety Engineers, said the human capital angle gave the profession an opportunity to look beyond simple regulatory compliance.

Rixio Medina, president of the American Society of Safety Professionals (ASSP) said, though safety and health was only a part of human capital management, it was critical for successful companies.

Kevin Furniss, vice-president of health, safety, security, environment and sustainability at AP Moller-Maersk and another IOSH Magazine interviewee (bit.ly/2BRns9O), noted from the conference floor that the UN's Global Compact for business and the Sustainable Development Goals it is designed to help to fulfil, do not explicitly mention occupational safety and health. He said the CSHS should try to push for a reference to be included in the goals, "otherwise all our efforts will be like a flea on an elephant's ass".

Sharman added that the emphasis in OSH and sustainability should not be all about reporting safety and health indicators but on prevention of the injury and ill health that the metrics represent. "Losing lives at work is socially irresponsible," he said.

Amy Metcalfe, of responsible investment campaign group ShareAction, gave details of the Workforce Disclosure Initiative (WDI). She said the WDI, which was "launched as a response to investor concern that they weren't getting meaningful data on workforce issues", is backed by 120 investors managing more than $13trn (£9.92trn).

Though it is funded by the UK's overseas aid ministry and the charity Oxfam, the WDI concentrates on the treatment of the direct workforces of major corporations as well as that of suppliers in lower-income economies.

The first WDI survey in 2017 gathered data from 90 companies responsible for about eight million workers in 100 countries.

"More than half the companies didn't provide information on who was involved in the risk assessment process or how often it happens," she said.

"Investor expectations are rising," Metcalfe warned and added that, on a positive note, nine out of ten respondents to the first survey answered again in 2018.

Ed Houghton, head of research and thought leadership at the UK's Chartered Institute of Personnel and Development, reported some highlights of a survey of investor interest in workforce data. He said the big institutional investors and fund managers took a strong interest in the way employees were treated.

Jennifer McNelly, chief executive of the ASSP, raised the issue of the burden reporting can place on employers. She said the average cost of sustainability reporting for smaller organisations was $36,000 a year (£27,600), falling to $12,000 (£9,200) for larger ones.

Paul Dickinson, founder of the Carbon Disclosure Project, said the plethora of reporting systems was overdue for simplification.

"We report financial accounts once to a public body and everyone can access them," he said. "That's the model we should be following."

Jonathan Labrey, chief strategy officer at the International Integrated Reporting Council, said work was under way to try to make sense of the "alphabet soup" of reporting initiatives. The Corporate Reporting Dialogue project brought together the disclosure accrediters, such as the International Organization for Standardization and the Global Reporting Initiative, to iron out differences in their measures and map them on to each other, he said.

In his keynote presentation, Dickinson indicated how the pressure for environmental reporting had pushed up disclosure, with evidence that the number of companies releasing data on their environmental impacts had soared from 220 in 2003 to more than 7,000 in 2018. There could be a similar ramping up of OSH performance disclosure in the years ahead, he believed, driven in part by the success of the WDI, which was "coming over the horizon like a freight train".

Pierre-FranÃ§ois Thaler, founder of reporting agency EcoVadis, which rates 50,000 suppliers for more than 300 corporations, said a common assessment method ensured consistency and reduced duplication of effort for the suppliers and their big clients. EcoVadis gathers data on 21 CSR measures, including safety and health and working conditions. 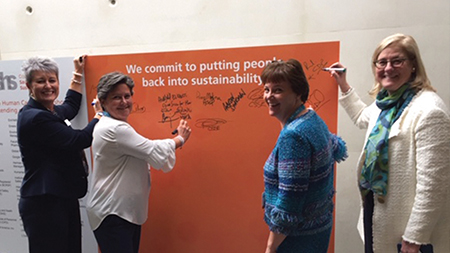 The company's database shows that the number of suppliers confirming they provided safety and health training fell from around 58% of contractors with more than 1,000 employees to 28% of those with 99 or fewer. Around 35% of bigger suppliers said they carried out risk assessments, compared with just over 20% of the small businesses. Only one big supplier in nine (16%) carried out internal OSH audits and only 11% took preventive measures to reduce the risk of musculoskeletal disorders.

EcoVadis's questions about accident rates revealed that 23% of suppliers claimed zero accidents, but 48% did not supply any accident metrics, a fact that Thaler described as "a bit scary".

The good news, he said, was that more larger suppliers were reporting positive OSH measures as the years progressed. An analysis of 4,000 manufacturing contractors with more than 1,000 employees found that the proportion saying they issued workers with personal protective equipment (PPE) had grown from 12% to 23% between 2014 and 2018. Those providing training had risen from 45% to 64% and the proportion with OHSAS 18001 certification of their management systems stood at 43%, up from 35%.

The increases were partly attributable to a "general maturation of industry", Thaler believed, and partly to pressure from corporate customers for better OSH management.

Keryn James, group chief executive of environmental consultancy ERM, noted that her organisation's survey of safety and health directors of 120 multinational businesses in 2018 had found 82% believed stakeholders' expectations of their OSH standards were increasing; 55% said their contractors were doing more hazardous work than their own direct labour forces. Almost 70% saw managing contractor safety as more challenging than controlling their own organisations' risks. "Some companies erroneously believe that by training contractors they will diminish their liability if an accident happens," said James.

Rather than speculate about the potential for increased investor pressure for companies to report on and improve safety and health, the CSHS and IOSH invited representatives of the corporate investment and fund management community to share their views.

Natacha Dimitrijevic, senior engager at Hermes Investment Management, presented delegates with a statement issued in 2018 by the CEO of the world's largest asset management corporation, BlackRock, which handles around £4.5trn on behalf of its customers. The statement told corporations that BlackRock's stewardship team was talking to companies about their corporate purpose, culture and strategy. It added that its priorities for 2019 were "governance, including your company's approach to board diversity; corporate strategy and capital allocation; compensation that promotes long-termism; environmental risks and opportunities; and human capital management".

Dimitrijevic said Hermes had set up a business unit to engage with companies on behalf of its clients, including the major pension funds, to see how they were managing CSR issues such as human capital.

Another asset manager representative, Adam Kanzer of BNP Paribas, said his company was also asking businesses questions about human capital management as part of its stewardship programme. But he acknowledged that so far, corporate investors had only ever spoken to executives in the companies they invested in. The safety, health and wellbeing of those companies' employees had been "a blind spot, a black box", he admitted.

"If investors got sick and died from investing in your stock, we'd get the point right away," said Kanzer.

Another panel brought together a quartet of senior OSH practitioners to discuss where occupational health fitted into sustainability in their organisations. They discussed the problem of generating workforce information for executive boards other than the standard accident and ill health statistics that risked becoming like wallpaper. Anita Tarab, global director of sustainability, environment and health and safety at search engine giant Google's data centre division, said she tried to bring issues alive by explaining to executives that the shortage of women's portable lavatories on construction sites -- Google has a massive data centre building programme -- had led to higher levels of urinary tract infections among female operatives.

Tarab said she had invested in "happy or not" monitors to provide instant leading indicators on issues from fatigue to PPE use. The units, familiar to visitors to airports and shopping centres, have a red button with a frowning face and a green one with a smiling face. Users are invited to press one to answer a question on the console. Deploying the units so employees passed them just after clocking in for a shift generated hundreds of responses to questions that included "Are you tired?" and "Do you have what you need to work safely today?". Some questions, such as "Do you have your safety shoes?", served a dual purpose, reminding employees of requirements while checking compliance levels.

Eric Woolf, director of quality, environment, health and safety at summit host L'OrÃ©al, said his company was not just trying to impose OSH standards on its 1,000-plus suppliers, though it did have some rules they had to follow. Insisting on OSH performance indicators created traps, he said, because it encouraged contractors to falsify their returns. Instead, L'OrÃ©al promoted a dialogue with suppliers, trying to teach them to raise their standards by example. "We are humble too," said Woolf. "We learn from them."

The summit ended with reports back from afternoon workshop groups in which delegates discussed the need for reliable lagging and leading OSH indicators to present to executive boards and corporate investors, that practitioners might need to develop new skills to frame safety and health as part of the sustainability agenda, and that putting the workforce at the heart of CSR demanded a stronger focus on people rather than just data.