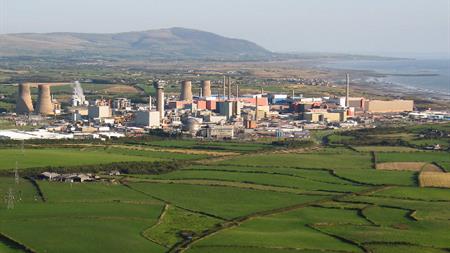 The operator of the world's largest nuclear waste storage and reprocessing site in Cumbria admitted breaching s 2(1) of the Health and Safety at Work Act in February. It must also pay costs of £96,753.

Carlisle Crown Court was told that Jonathan Greggain was handling a radioactive probe in a glovebox on 5 February 2017 when he was cut on his left hand.

The prosecution was brought by the Office for Nuclear Regulation (ONR) whose investigation found this was a "difficult operation".

The instrument, which was part of an alarm system, was corroded and sharp and punctured Greggain's hand through the protective glove he was wearing.

He received an intake of plutonium equal to approximately eight times the maximum legal annual exposure limit for workers in the nuclear industry.

According to the BBC, a small area of Greggain's skin was affected and had to be removed. Further tests revealed he had received an internal dose of radiation.

It reported that Nigel Lawrence QC told the court plutonium entering the bloodstream via a wound was "by far the most dangerous pathway to individuals".

According to the Federation of American Scientists, plutonium that is passed into the bloodstream through a wound deposits in the lungs, liver or bones. It can remain in the body "for many decades" and can damage the surrounding cells.

After the hearing ONR superintending inspector Paul Smith said: "This was a case where Sellafield failed to properly assess the risk to workers arising from sharp objects when working in a glovebox.

"The accident could have been avoided had the corroded probe been routinely replace -- a change that was put in place by the company immediately after the event."

Dr Mina Golshan, deputy chief inspector and director of ONR's Sellafield decommissioning, fuel and waste division said: "We note the conclusion of this case and the recognition by Sellafield that, for this particular incident, the company fell short in its legal duty to protect the safety of one of its employees.

"This case does not point to any broader concern about the control of risks and hazards across the Sellafield site and was instead related to a specific event and the outcome of our subsequent investigation. Sellafield has already learned lessons from this event, implementing improvements to help prevent a re-occurrence, and we expect it to continue to seek reasonably practicable improvements in all areas of its work affecting safety.

"This will not affect our regulatory strategy for Sellafield which encourages the safe and timely reduction of the hazards and risks, while ensuring the site continues to meet its legal obligations."

"Sellafield has made significant progress in key decommissioning projects in recent years and we will continue to work constructively with the site and relevant stakeholders, to ensure Sellafield maintains this momentum while taking advantage of technological advantages."