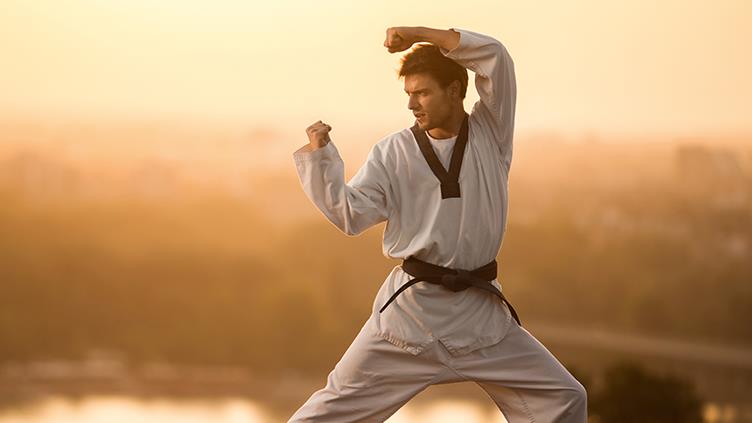 Although the term black belt has been borrowed from martial arts, in the OSH context it has nothing to do with karate or judo. Colours vary (see "Colour-coded" box further down), but in most martial arts the black belt is an expert in their field, their proficiency gained not merely by attending courses but through experience. In this case, the field is lean six sigma (LSS), which combines ideas from lean manufacturing to become more efficient and reduce waste with six sigma to reduce process variation (see "Define your terms" box, at the bottom of this article). The result is a toolbox of methods for improving the performance of an organisation.

Given that description, LSS could sound like a variation of quality management (www.ioshmagazine.com/article/learning-quality-managers).

However, Dr Andrew Slaney, a master black belt working with the British Standards Institute as an LSS trainer, coach and consultant, explains: "A management standard gives you a best practice template, but LSS gives you the methods and tools to achieve continual improvement."

Slaney's background was in business process improvement, but Dr Robert Collins had a career in safety-critical systems before he gained his master black belt while working for global security and aerospace company Lockheed Martin. From the beginning, Collins could see how LSS could support safety outcomes as well as quality outcomes.

"A key focus in LSS is on waste," says Collins. "The TIM WOODS(S) acronym (see "TIM WOODS(S) box) lists typical wastes that a lean approach focuses on." The extra S for safety was a later addition to the original acronym but all the letters in the sequence could trigger thoughts on how to reduce OSH risks. Reducing the distance goods are transported by road cuts road risk as well as cost; reducing unnecessary movements in a warehouse or a factory improves efficiency but could also lower the number of manual handling injuries. Staff waste could refer to people having to wait for a permit to work before they can start a task. Failure to tap the workforce's knowledge is another form of waste but enabling staff to report problems and suggest fixes can reduce it.

Collins suggests that O for "over processing" is a reminder to OSH practitioners to look at waste from another angle. "Are you doing too much safety?" he says you should ask yourself. "Are there multiple checks and tests that don't add measurable value to safety?"

Slaney suggests a rule from his use of LSS in process improvement to determine whether an activity is waste would apply equally to safety and health: "Does the step add any value to the outcome for the customer, who could be internal or external? In safety and health terms, I guess you'd ask, 'Does the step reduce any risk?'. If it doesn't, ask why you are doing it."

To reduce waste, Collins recommends five Ss. These are:

Sort -- sort the necessary tools, parts and information, and identify what isn't needed.

Set in order -- create optimal locations for each item in a work area. This can include how information is organised on a server or shared drive.

Shine -- clean the workspace after each day to maintain order.

Standardise -- remind people to conduct a sort, set in order and shine to maintain the workplace in a pristine condition.

Sustain -- ensure the organisation has the discipline to maintain the habit of sorting, setting in order and shining.

Superficially, the 5S components look like good housekeeping but the technique has an efficiency side. "A tool left on the floor," says Collins, "might cause someone to trip but it will definitely cause a problem to the next person who wants to use it as they waste time finding it."

The short-term benefits might be a way to motivate people to act on the 5S principles in a way that the "threat" of some future accident isn't.

5S can be supported by "shadow boards", which display an outline of each tool, letting the user see where something should be stored but also if something is missing. This makes it less likely someone will try to use the wrong tool when they can't find the right one -- such misadventure being a frequent cause of accidents.

Another benefit comes from the last two Ss -- standardise and sustain. Slaney says: "Too often, there is a big fanfare at the start of a lean 5S programme -- but I ask for evidence that identifies how good practice will be standardised and the programme sustained. Assigned responsibilities in work areas for the first three Ss as well as mechanisms for checking the last two Ss are needed."

"You need to make the important stuff visible," says Collins. Some aspects of visual management sound like practices we already carry out in safety: marking out areas on the floor that must be kept clear; using signs to indicate what PPE must be worn, who can access an area, or other precautions needed. Some of it sounds like good human factors -- such as making sure that colour coding of controls or tools follows convention and is consistent.

But for Collins, visual management is more than signs on the wall and colours on the floor. "Visual management has to be a core value for LSS -- and for safety." Huddle boards are a central concept in LSS, with all the key information displayed visually. "It becomes part of the workplace ritual -- each morning the team gathers around the huddle board, reviews its contents and works out what they need to do next. It is not just the visuals -- but the fact that they become a focus for the workplace routine and part of a deeply embedded culture." Collins contrasts this with routine daily stand-ups or toolbox talks, which can become tickbox exercises. 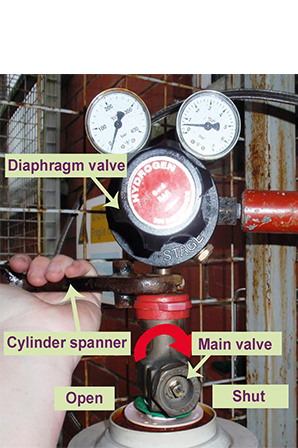 Slaney suggests visual management as a way to promote and sustain 5S, with before-and-after photographs as one technique.

"You need to show people what the standard looks like -- and convey to them the problems of not meeting the standard that's been agreed."

While the after photograph can show the desirable state, the before picture can be used to mark up the hazards of the unsorted state. This doesn't apply just to industrial environments -- Slaney uses an example of a busy desk and a clear one in his training. Since clutter on and under a desk has an impact on posture, it will affect musculoskeletal discomfort, as well as security and efficiency, and computer users could be nudged to remember this with photographs.

Too often method statements, risk assessments and other safety documents sit in a folder on a shelf or on a hard drive. Peter Martin applies his black belt training as technical manager at the Vale nickel refinery in Swansea, south Wales.

"Our occupational risk assessments and PPE requirements for each task are printed out and displayed, where possible, close to where the task is being carried out," he says. "This provides a visual reinforcement of the task, emphasising any safety critical steps." (See figure 1.)

Another visual tool recommended by Collins is the Lean A3, where a project has to be summarised on a single sheet of A3. "A3 forces you to be succinct and very clear in describing a problem, the analysis of the problem, and the solution." A3s include graphics, photos, charts, maps and drawings, and can have handwritten notes and adhesive notes added.

Martin agrees that A3 keeps the report short but adds: "The value in the A3 is following the steps to ensure you follow the PDCA (plan -- do -- check -- act) process and do not miss anything out."

Limiting your next safety report to two sheets of A4 paper would be a good discipline, but the point of a single sheet of A3 goes further than succinctness -- this information is to be shared on a wall, not attached to an email or printed for a ring binder.

Go to the gemba

There is much discussion in OHS -- partly driven by the ISO 45001 standard -- about "leadership" and "worker participation". Collins suggests one critical facet of LSS that can help here: "Don't manage from an ivory tower -- leaders must walk to the gemba." Gemba is the Japanese word for "the real place." 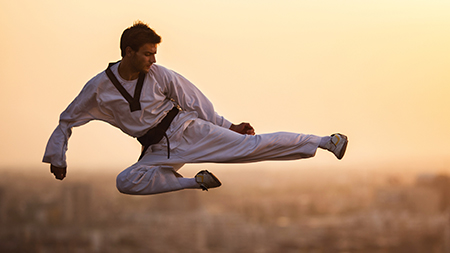 Initially, the gemba walk sounds like another familiar concept -- management by walking about (MBWA). The father of quality, Dr W Edwards Deming, wrote in 1982: "MBWA is hardly ever effective. The reason is that someone in management, walking around, has little idea about what questions to ask, and usually does not pause long enough at any spot to get the right answer."

"A gemba walk is often led by a 'sensai' (a master practitioner) who leads the managers around the walk and teaches them what to look for. It is an opportunity for coaching."

There are parallels between how Safety Differently conversations are described and how Collins describes a gemba walk. "Leaders might be focused in their gemba walk with a checklist," he says, "for example relating to 5S or to safety issues. But when they identify a concern they ask questions rather than criticise. The workforce has the opportunity to coach the managers on the issues that stop them doing things right."

Collins agrees: "LSS has a huge emphasis on worker engagement. Everybody is expected to contribute. Everybody is trained to do so. Gemba walks and daily huddles around the visual management board are important components for achieving this."

Martin also sees "a strong thread of engagement throughout lean six sigma". He has seen the benefits of leaders using the gemba walk to learn. "If the leaders take away actions, like removing things that are stopping people doing the 'right' thing, they will improve engagement," he says.

For Martin, engagement also entails workers creating solutions. "Staff from all levels developed behavioural standards around specific concerns they had," he says. "These allow people to feel safe challenging anyone on site and also call for people to accept those challenges in a positive manner. This has worked well."

As with the martial arts, there are levels below the black belt (see "Colour-coded" box) and Collins says "anyone in health and safety would get lots of valuable, transferable skills from a green belt". He suggests that OSH practitioners could benefit from learning about other LSS tools -- including DMAIC (define, measure, analyse, improve, control), poka-yoke, ishikawa, and failure mode and effect analysis (FMEA). The latter was also cited by Slaney and Martin as a key tool for improvement.

Collins and Slaney believe the soft skills training in LSS would benefit OHS. Slaney mentions "self-development and development of people" and Collins highlights "sensitisation to workplace issues", concluding: "LSS people have a well-developed alert 'radar' -- they are trained to observe and see problems and resolutions in a new way."