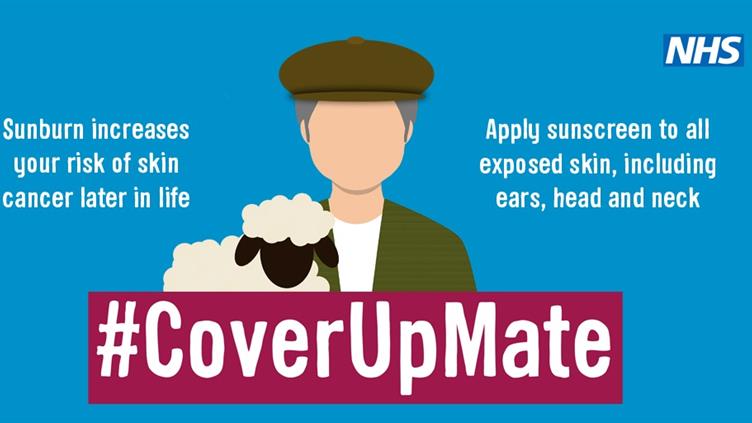 The copy for the following press release has been provided by NHS England.

Eighty percent of people involved in country life in the South of England think outdoor workers are at greater risk of developing skin cancer due to longer exposure to the sun, a survey of Mole Valley customers suggests.

But while more than half of respondents said that protecting yourself from the sun was "very important" more than a quarter said they "hardly ever" used suncream.

The survey - completed mainly by agricultural workers - was conducted by the farming retailer for NHS England's Cover Up, Mate campaign. Both Mole Valley and the National Farmers Union (NFU) are supporting the campaign.

The NHS England campaign aims to encourage men who work outdoors, such as farmers, construction workers, gardeners and sportsmen to take a safer approach when in the summer sun to help reduce the incidence of skin cancer.

Skin cancer is one of most common forms of cancer and it is growing amongst men at a faster rate than it is for women.

NFU South East, Regional Board Chairman Julian Gibbons said: "The #CoverUpMate campaign has been a real conversation starter at agricultural shows. It's vital these conversations continue with outdoor workers of all ages. We farmers owe it to our families to take sun protection seriously and avoid potentially skin cancer which can be fatal. I've been encouraging my workers to follow my example, applying sun cream and covering up with a hat and shirt during the summer months."

Julie Edwards, Head of Communications for Mole Valley Farmers, said: "If you are working outdoors it's easy to forget about applying sun cream. By supporting the campaign we are trying to overcome the masculine stereotype, and encourage all men to wear sun protection and cover up when in the sun. Skin cancer is just not worth the risk."

A recent Imperial College study, commissioned by the Institution of Occupational Safety and Health (IOSH) estimated that construction workers make up the highest number of deaths (44%) caused by ultraviolet (UV) rays from the sun at work in Britain, followed by agriculture workers (23%).

Kate Field, Head of Information and Intelligence at IOSH said: "We encourage businesses to implement sun safety strategies to help prevent skin cancer. This includes checking the UV index, avoiding or minimising exposure to direct sunlight between 11am and 3pm, and regularly swapping job tasks between workers to make sure everyone on the team can spend some time in the shade. People can also cover up by wearing clothing and applying sunscreen where the skin can't be protected."

Clare Nasir, Met Office presenter and meteorologist, said: "If you're working outdoors it's important to remember that UV levels are usually highest between May and September. Clouds don't always stop UV rays, and unlike the sun's warmth, it's difficult to know when they may be harming you -- so be sure to check the forecast."

&bullet; a tan is a sign of skin damage -- not health -- and may offer only factor 3 protection;

&bullet; getting painful sunburn, just once every two years, can triple your risk of melanoma skin cancer;

&bullet; you're at higher risk of skin cancer if you have fair skin, moles or freckles, red or fair hair, or light-coloured eyes;

&bullet; the highest risk months in the UK are May to September when UV rates are higher.

Official NHS advice on staying safe in the sun is:

&bullet; spend time in the shade if you can;

&bullet; make sure you never burn;

&bullet; cover up with suitable clothing and sunglasses;

&bullet; use at least factor 15 sunscreen;

The earlier skin cancer is caught, the easier it is to treat, so see your GP as soon as possible if any moles or freckles change size or shape.