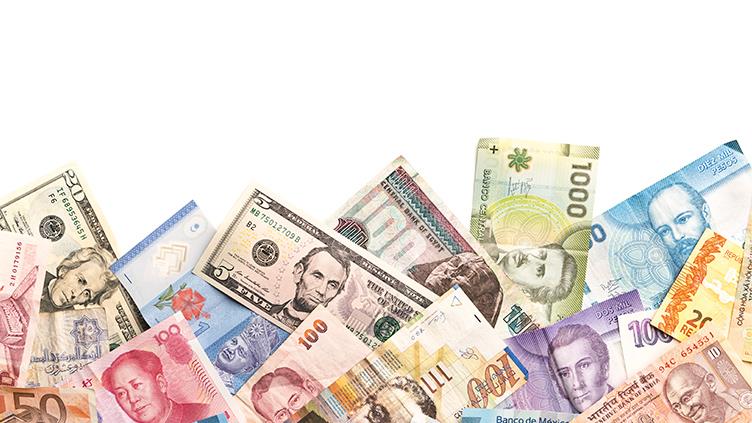 The survey was open online to both IOSH members and non-members between 14 March and 14 April and advertised in IOSH Magazine's twice weekly e-newsletter. The poll drew 2,310 useable responses, 95.5% of them from IOSH members.

As Figure 1 (below) shows, a substantial majority of respondents (90.5%) were based in the UK, with the remainder mainly in continental Europe, the Middle East, the Far East, Africa and the Republic of Ireland.

Respondents' median average age was between 45 and 54 and the age distribution was similar for all industries. The fact that only 14.5% of those polled were under 35 and around one in four (24%) were over 55 reflects the demographic trend of an ageing workforce and falling birth rate as those in the generation produced by the "baby boom" of the 1950s move into the latter stage of their working lives.

Three out of four respondents (75%) were male. In the lower part of the age spectrum -- practitioners aged 34 and under -- the proportion of female respondents rose to one-third (111 of 336 in this age group).

Employed respondents associated themselves with organisations ranging in workforce size from ten employees or fewer up to 100,000-plus. As Figure 6 shows, almost half the sample worked for employers with more than 1,000 workers, but 30% were under the 250-employee threshold where employers are classed as small and medium-sized enterprises.

Respondents' median time in the OSH profession was between 11 and 15 years. Two respondents, both in construction -- one employed, the other self-employed -- had each notched up more than 40 years in OSH management. The average time respondents had spent in their present job was between two and five years.

We asked OSH practitioners to pick from a small range of job titles, choosing the one closest to their own, ignoring other responsibilities such as environmental management, quality or security management. By far the most common title was safety and health manager, accounting for two-fifths of the sample. The breakdown by job title for all respondents was:

Broken down by broad employment sector, the sample was as follows:

The division into industrial sectors is shown in Figure 5. Construction and manufacturing are by far the biggest sectors represented, followed by consultancy, government and the energy and water industries. 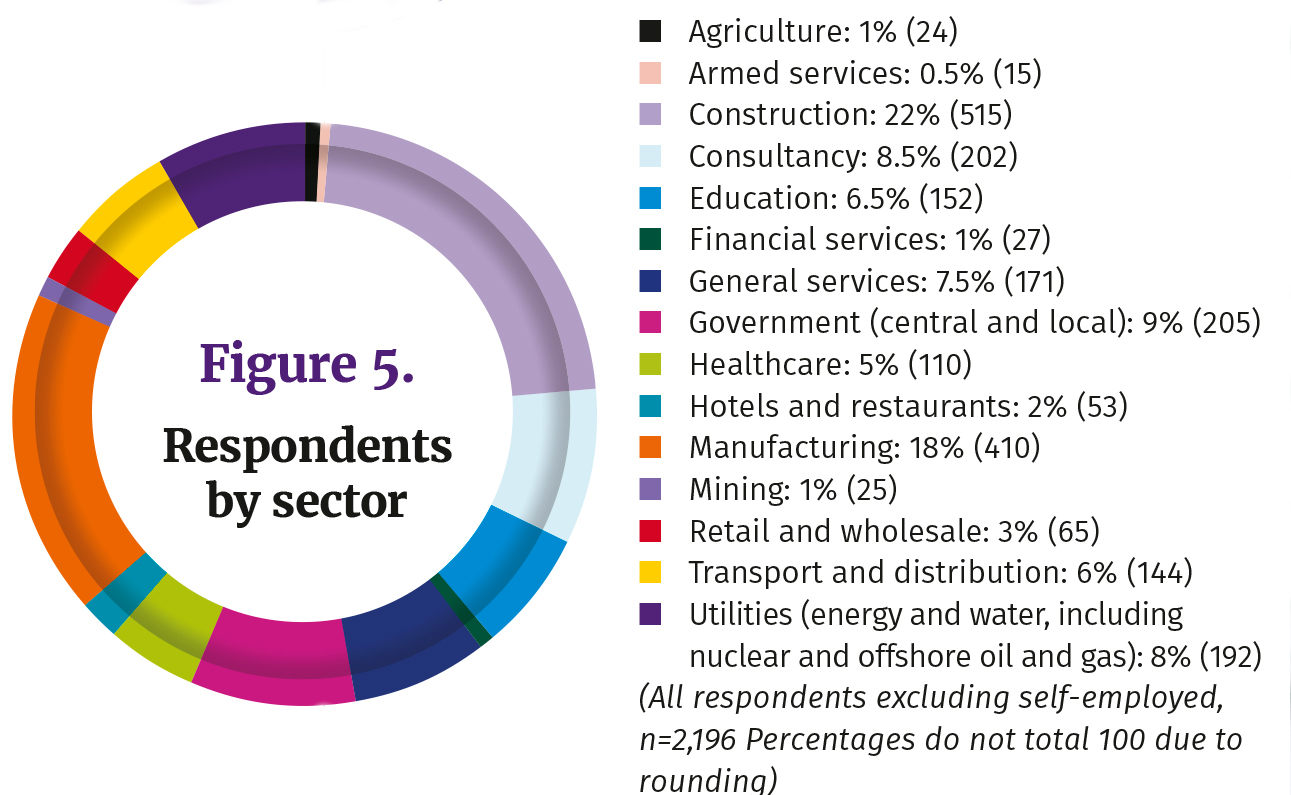 Respondents could choose as many qualifications as they held from a list. The proportions were as follows:

Excluding freelancers, the average OSH practitioner polled managed one other person, though 44.5% of respondents had no direct reports. Broken down by job title, the median number of reports was:

We also asked how many work sites or premises respondents were responsible for. The median answer was five sites. One in five employed respondents (19.5% or 431) managed only one site each. At the other end of the spectrum, 80 practitioners (3.5%), from a mix of industries, said they each managed safety and health at more than 500 sites. 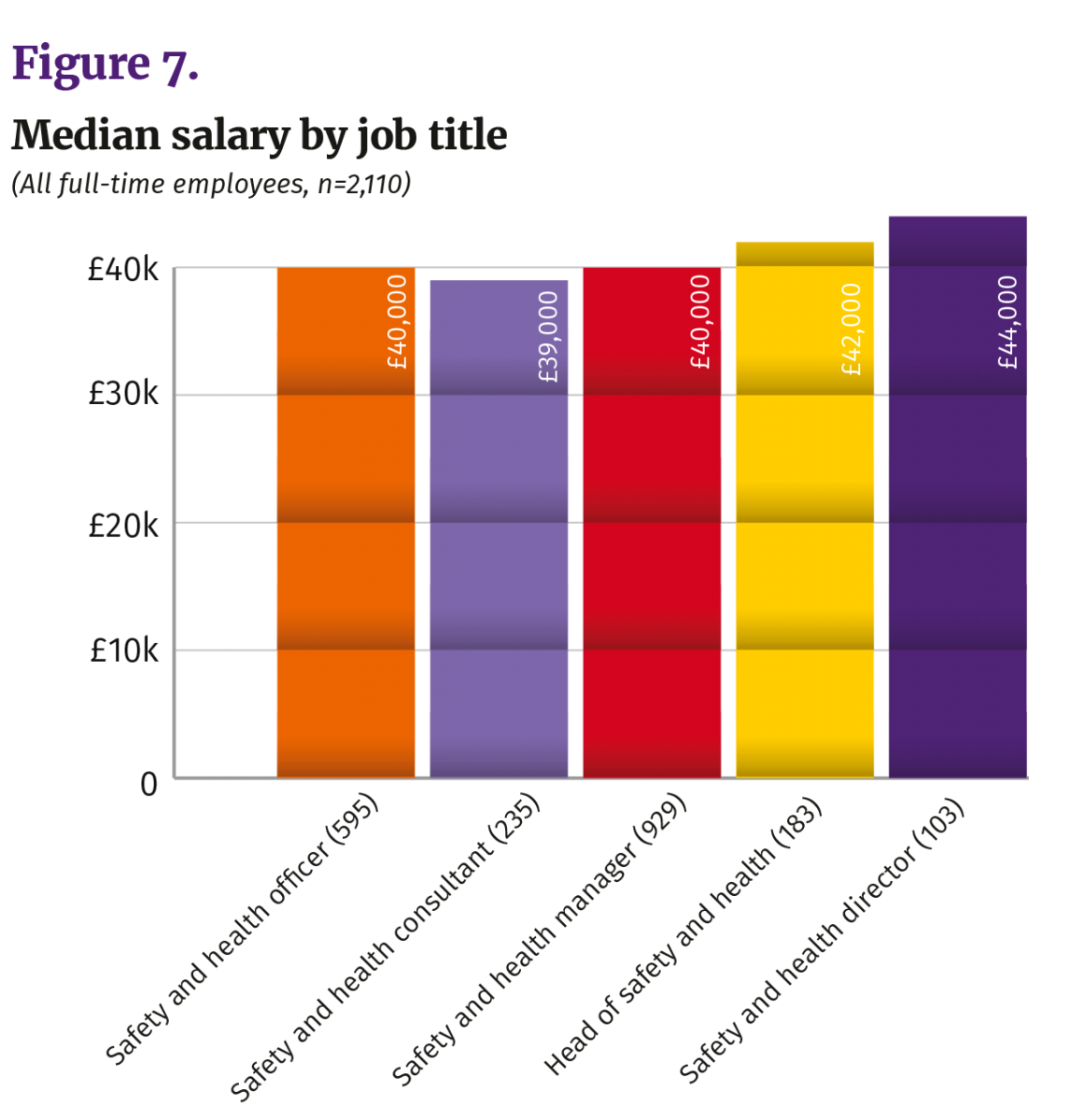 The average salary figure we use is the median -- the midpoint in the range from smallest to largest salary figure. This gives a more reliable figure than a mean average which can be distorted by a few very high or low earners.

Thirty-seven individuals (1.5% of respondents) earned more than £100,000, mostly consultants and managers in the private sector. Two male and one female safety manager in construction reported salaries over £150,000; all three reported being quite satisfied or very satisfied with their jobs.

The median average salary for all full-time employed OSH professionals (2,110 respondents) was £40,000. By comparison, the median for environmental professionals, recorded in the most recent survey by the Institute of Environmental Management and Assessment (IEMA), was £39,000 -- based on a sample of 1,135 practitioners surveyed at the end of 2016 -- slightly lower than our own £40,000 average.

Figure 7 (above) shows the median salaries for common job titles in our survey across all employment sectors. It shows a rising median salary with higher job status. The differential between safety and health directors and managers is lower than might be expected, perhaps accounted for by the relatively low number of directors in our sample. The differentials remained constant for the public and private sectors when analysed separately.

Only around two in five consultants in the survey (136 out of 235 with the title) are employed by consultancies; the rest are mainly in the construction, government, and energy and water sectors. The median salary for consultants working for consultancies was £48,000, substantially higher than our £39,000 figure for all consultants.

More than 90% of our survey sample is based in the UK. For most job titles, median salaries for UK-only respondents were the same as for the whole sample, reflecting the fact that OSH practitioners from other countries who completed the survey were evenly distributed through the salary range. None of the other jurisdictions contributed enough responses to derive a median salary.

The interquartile range, which covers the 50% of salaries that fall either side of the median (so excluding the top and bottom 25% of salaries) was as follows for each job title, for full-time employees:

Broken down by broad sector, the median salaries for full-timers in the most common job title in our survey -- health and safety manager -- was: 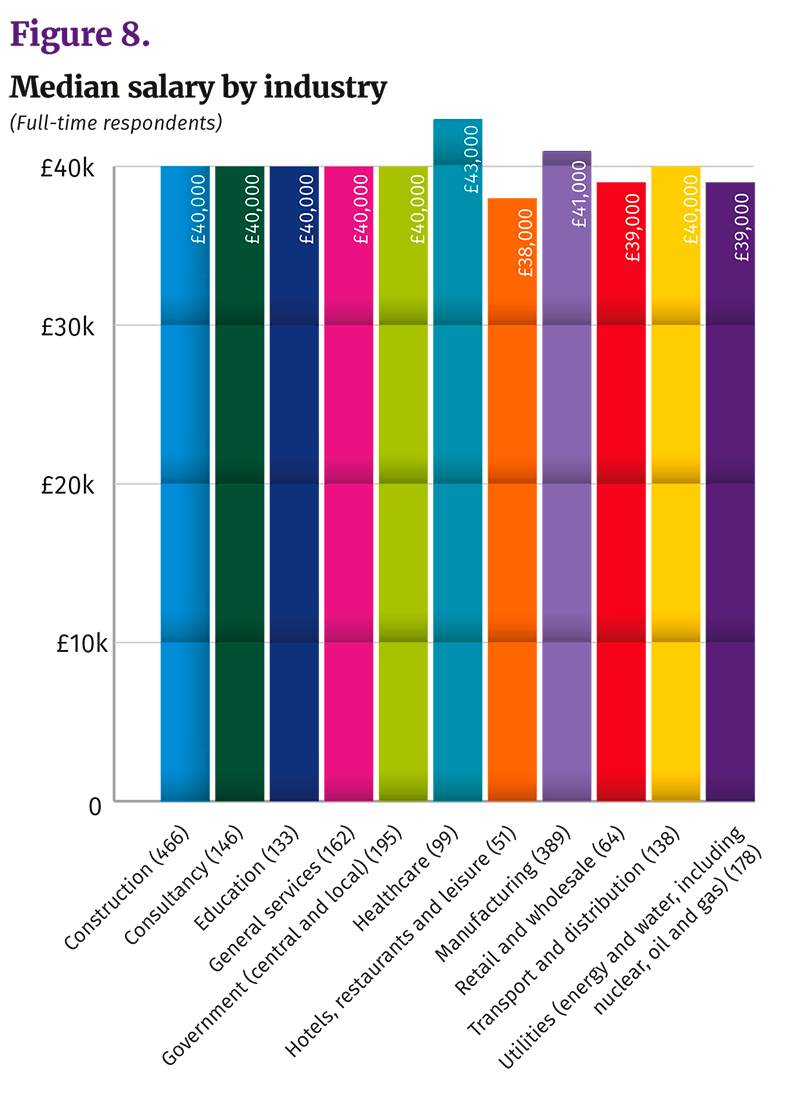 The median salaries for all full-time practitioners by industrial sector are shown in Figure 8. Several sectors, including agriculture, the armed services, financial services, and mining and quarrying, did not have enough respondents to calculate a reliable figure.

The average salary in many sectors matched our all-sector median of £40,000. These included construction, consultancy, education and general services -- which includes facilities management, legal services and media -- and transport and distribution.

The UK's Office for National Statistics reports on wage differentials by gender. Its latest data, released in March (bit.ly/2m3j7wr) covers 2016 and shows that women in full-time jobs earned 9.4% less on average than their male counterparts.

The results of our survey suggest that the gender pay gap in safety and health is half this average. The 528 full-time employed female OSH practitioners in our sample (25% of the total) had a median salary of £40,000, 5% lower than the £42,000 for male respondents.

The most recent survey by IEMA of environmental practitioners' salaries found a pay gap of 16.7%, more than three times that in our survey.

The sub-sample of self-employed female respondents (20 out of 109) was too small to calculate a median salary, so it was not possible to estimate the gap for practitioners who work for themselves. 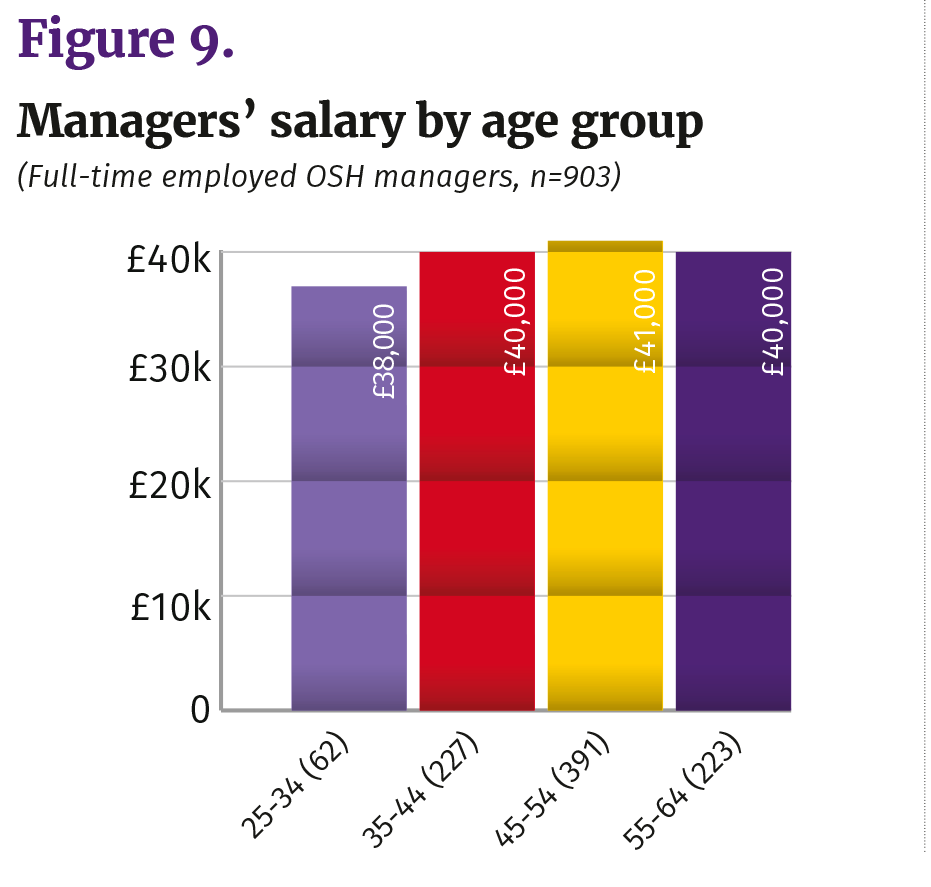 Our overall median salary of £40,000 was consistent for full-time employees in most of the age groups listed in Figure 3, though the samples were too small for those under 25 and 65 and over to produce a median figure for either group. Broken down by the most common job title in our survey -- safety and health manager -- the median salaries for full-time employed practitioners aged 35 to 44 and 55 to 64 were the same as the all ages median. But those aged 25 to 34 dropped to £38,000 (see Figure 9).

Respondents were asked to note all the OSH qualifications they had obtained. An analysis of those in full-time employment by the highest qualification they hold is shown in Figure 10.

The sub-samples with the newer National Compliance and Risk Qualifications (NCRQ) certificate and diploma, British Safety Council qualifications and OSH doctor's degrees as their highest qualifications were too small to calculate reliable median figures.

The fact that the median salary for those with bachelors' degrees is similar to those for diploma holders in our sample may support the argument that such credentials have degree equivalence to employers.

The age profile for those with degrees is lower than for the whole sample -- 15% of OSH graduates are aged 55 or over, compared with 24% of all respondents. It may be that graduates have still to reach peak earnings, but the profile for years in the profession is similar between degree holders and those with diplomas. 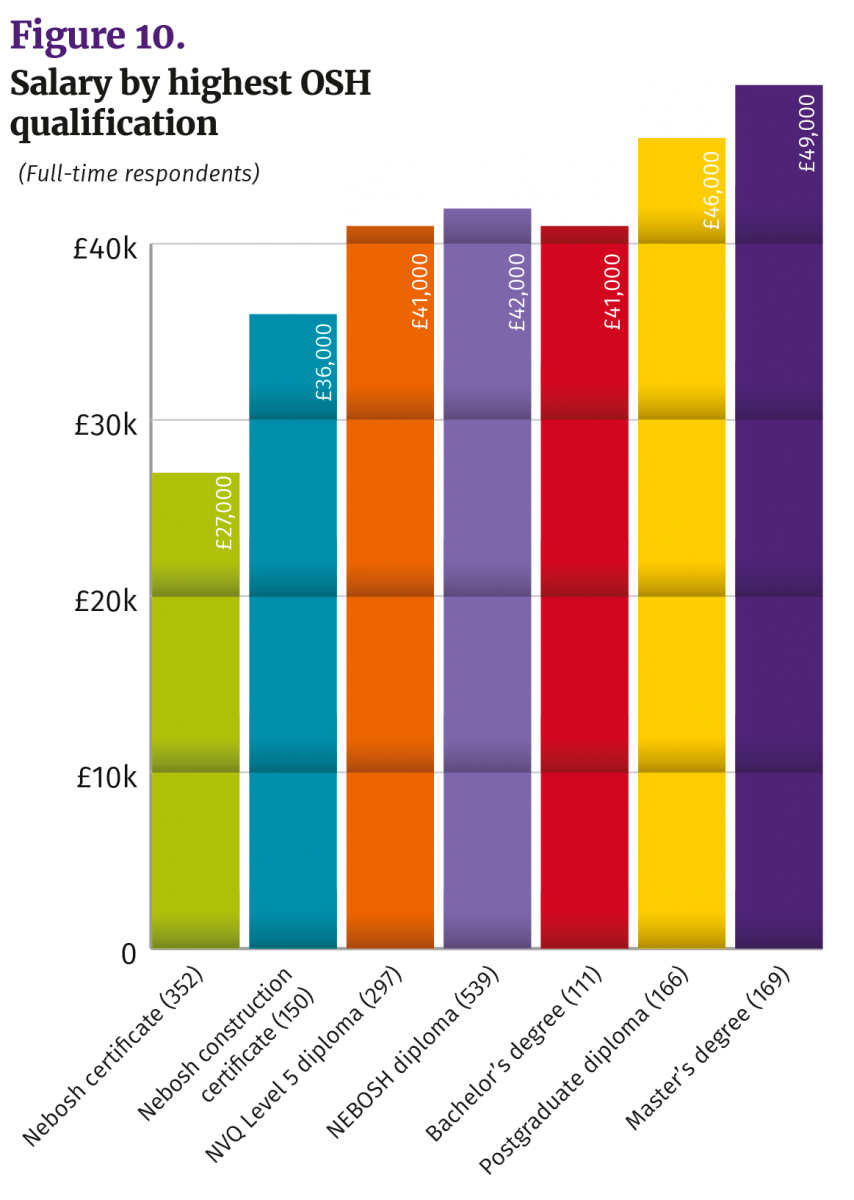 Almost all the respondents to our poll -- 96% -- were IOSH members. Figure 11 seems to show clear advantages of moving through the membership echelons, with distinct steps in the median salary for even affiliate members above non-members. The incremental increases widen with the membership grades; fellows earn £12,000 more at the median than chartered members -- though the sample of fellows is too small to place a heavy weight on.

"This really stands out in the survey, indicating that pay levels are determined more by IOSH membership grade than most other variables," says Steve Jackson, health, safety and sustainability director at the EEF manufacturers' organisation.

Asked about their membership of other professional organisations, participants listed a wide range, from the Chartered Management Institute (CMI -- 8 respondents) to the Royal Society of Chemistry (12).

Those most commonly cited were: 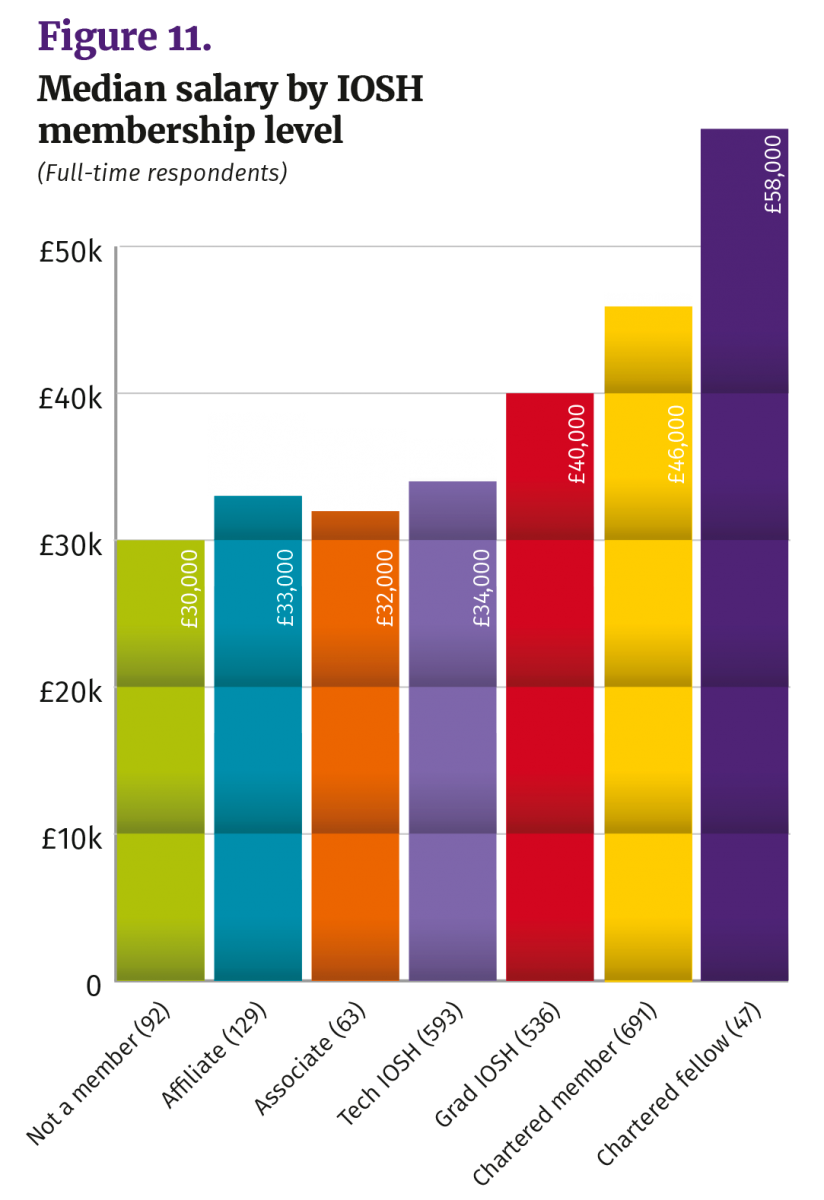 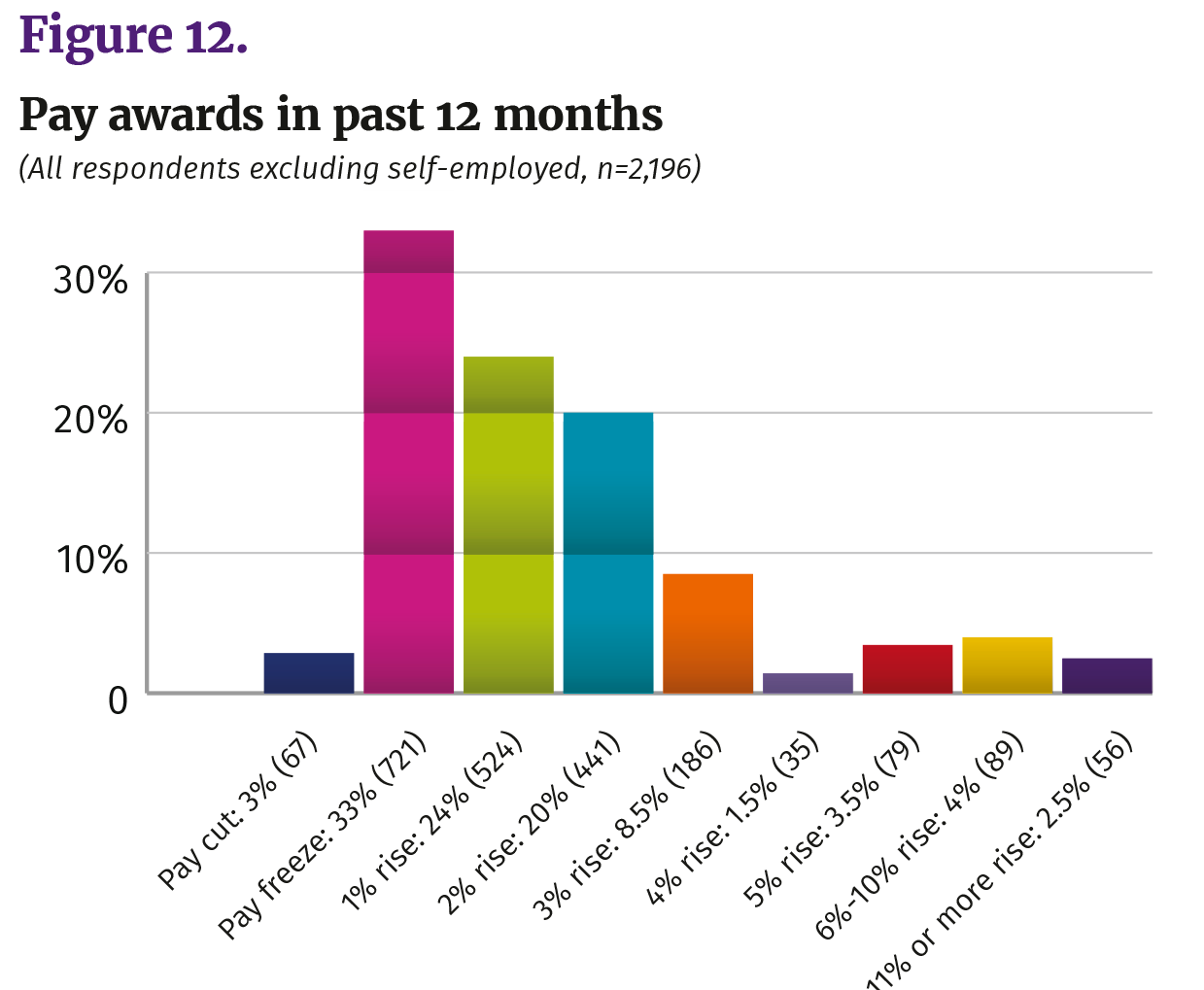 The median pay rise for full- and part-time directly-employed respondents at their last pay review date within the 12 months before the survey was 1%. This was the same for private, public and charitable sector OSH practitioners.

Pay and benefits specialist XpertHR reported in January that its median pay review for all professions for the previous 12 months, based on awards for more than 240,000 workers, was 1.9% -- almost twice the median for our sample.

As Figure 12 shows, the median 1% rise conceals a massive variation in pay awards. One-third of employees had their pay frozen (and 3% had their pay cut), while 10% of the sample saw their pay rise by at least 6%. This group included five OSH directors, 18 heads of department, 65 managers, 33 officers and five assistants.

The policy in the UK which has restricted pay reviews for many public servants, such as those in the National Health Service and the armed services, to a 1% maximum was reflected in our sample but did not seem to have any distorting effect on the public sector median rise.

We asked OSH practitioners if their work performance was assessed against any or all of four common organisational metrics. The results for full- and part-time employees were:

More than two-fifths of respondents (998) added another performance measure to the list, but two-thirds of these simply cited general appraisals or performance reviews. Among the specific measures noted were balanced scorecards, financial management and training delivered.

Eleven consultants cited client satisfaction or retention as a measure. One health and safety manager in the utilities sector noted wryly his performance was judged on "what appears to be the flavour of the month". Seventy-seven respondents (3%) reported that their performance was not measured by their employers.

We asked whether respondents' pay increases were linked to performance assessment. The results for all employed respondents, were:

This suggests that for most OSH practitioners, the inflation rate or their employer's balance sheet is the main driver of their annual pay movement (or lack of it).

Our analysis of extra-salary benefits provision for full- and part-time employees in the survey (2,197 respondents) was as follows:

As Figure 13 shows, our survey suggests OSH professionals are generally a contented lot; almost four out of five report moderate or high job satisfaction. The UK Chartered Institute of Personnel and Development's latest Employee Outlook poll, published in May, shows a job satisfaction rate of +48 (those satisfied minus those dissatisfied) for all occupations (bit.ly/2mcv9mZ). By the same measure our OSH sample would score +5. The satisfaction levels varied only minimally from the percentages in the chart when analysed by salary level, last pay rise, age, gender or employment status.

The satisfied three-quarters majority even held up among those who had put up with pay cuts in the previous 12 months. 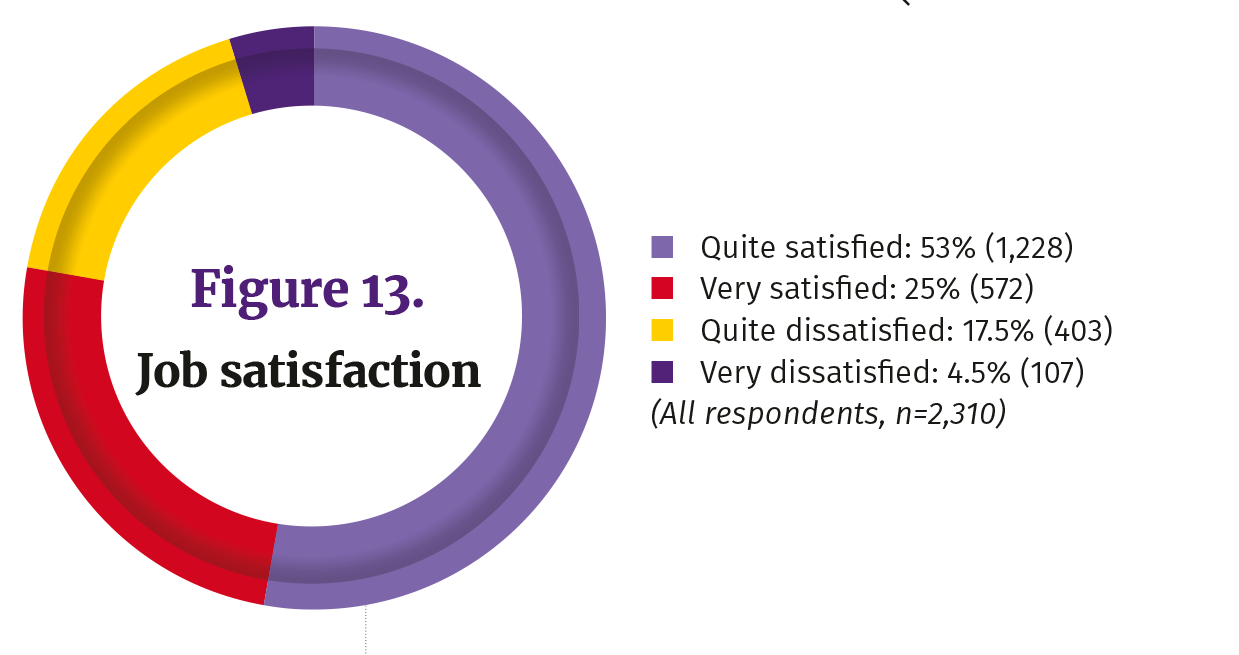 There were comparable levels of satisfaction among private sector and public sector respondents, but satisfaction among those working for charities and not-for-profit businesses was slightly higher than the all-sector average, with 85% saying they were quite or very satisfied.

"You are forever hearing about how a majority of employees are dissatisfied with their jobs," notes Steve Jackson at the EEF. "Here we see four out of five practitioners with positive job satisfaction. We are passionate about what we do and see the clear benefits of good OSH management."