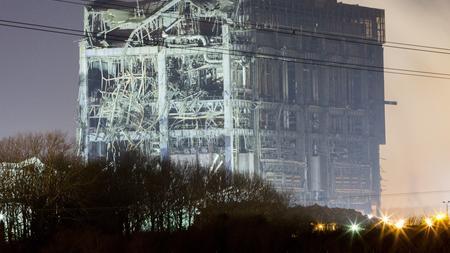 Ken Cresswell, 57, Chis Huxtable, 34, and John Shaw, 61, were trapped underneath rubble on 23 February and have not been found. Michael Collings, 53, was also killed and his body has already been recovered.

The decommissioned Didcot A power station in Oxfordshire was due to be demolished when the boiler house partially collapsed on 23 February. A 50 m exclusion zone was then set up around the site after the remaining structure became unstable.

The remote demolition at just after 6am brought down the rest of the building in an operation that used ten remote-controlled robots.

"The absolute priority of our multi-agency response remains the recovery of the missing men so they can be returned to their families and to understand what caused this tragic accident," Thames Valley Police said in a statement.