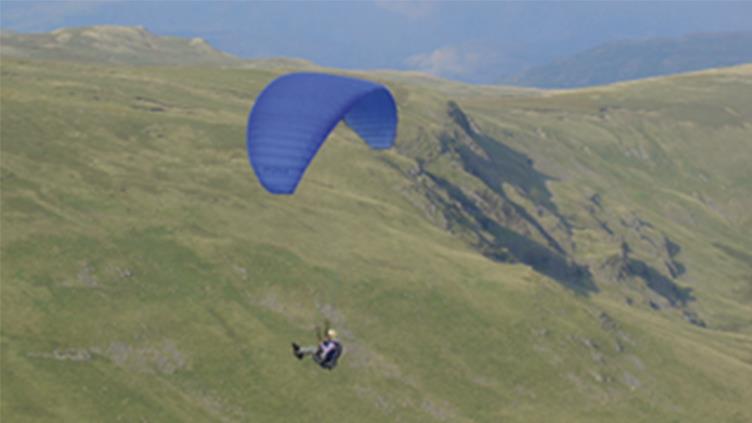 In 2001 I left the Seafish Industry Authority to come to Sellafield and knowing I was coming up to the Lake District, where the take-off positions are the best in the country, I spent the week between jobs learning to paraglide.

That took me to the first level qualification. It allows you to do short flights, what we call a fly-down from the top of a hill to the bottom, maybe a bit of ridge soaring. You learn air navigation, how to report your flying site so local air traffic is informed -- there is a "notice to airmen" for commercial and military pilots to check. In the hierarchy of aircraft the lowest is a hot air balloon, which only has control of height, not direction or speed, then paragliders, then gliders and powered aircraft at the top. The aircraft have to take care of everyone else below them in the hierarchy.

You might think it's just people drifting around hills, but the world distance record set recently was a flight of 514km.

When I finished the week's training I bought the gear. This will make me sound like a skinflint but I spent £400. You could say that's not much to put your life on and I could have spent £1,800, but during the first year I was really just learning to fly. In the air the wing can tuck, fold or have leading edge collapse which stops it inflating and models are rated DHV1 to DHV4 for their stability and resistance to these problems. Mine was a DHV1 which is the safest and I was just doing ridge flying, not getting into thermals, so I never went high enough to need a parachute. (Paragliding parachutes sit in a little box in your lap and if you are in trouble you have to pull the cover off and throw the parachute out, so by the time I'd done all that I'd probably have hit the ground. It would be like one of those Warner Bros cartoons where the parachute inflates above the crater you've made.)

As I got better I upgraded the equipment and that's about understanding the envelope.

When I'm on the ground I want to be in the air but when I'm in the air I want to be on the ground. Partly it's the adrenaline rush that attracts me but some of the best times I've had were flying routes I've walked. If I've walked up [Lake District mountain] Blencathra then I've flown to the top after, I could see where I've walked but gained a completely different perspective.

I'd recommend it to anyone. You can go up strapped to an experienced instructor to try it. It doesn't matter if you are scared of heights, I know plenty of paraglider pilots who are, but they do it because they are in control.

It's made me very conscious about precautions for work at height. When I see workers not carrying out full harness inspections, I know it's an item that could save their lives. Every time I fly my life rests on the integrity of a harness and that drives an inspection process; I'd expect a scaffolder to understand and do the same. When I see a bit of lanyard fraying I'll replace it, I know exactly what I'm looking at; some scaffolders work to a lower standard.

Life is about taking risks; with paragliding I know exactly the risk I take. I'm cautious, so would I go to a site I've never been to? Yes. But I'd be using all my gear which I've checked, I'd talk to the guys around who know the place, I might even go one week and just watch people fly so I'll understand the air patterns when I do go up. You take that into the work environment and when I come across something new to me -- and that can happen at Sellafield -- I go and ask those who have done it before and learn from them. It's risk assessment based on information and knowledge rather than just guessing at it.

I have a personal rule never do two new things at once. So if I'm trying out a new manoeuvre, I'll do it at a site I'm familiar with. I have got into trouble occasionally. I once flew into the only tree on a hillside. It's a bit like driving, they say if you take a corner and look at a tree, you'll hit the tree. It took me about two hours to unpick bits of my paraglider from the branches. I have a couple of scars from that. I know people who have broken legs and one person who died. But you have to rationalise the risks.