A is for ALARP

ALARP is an abbreviation for "as low as reasonably practicable" and stands at the heart of the way health and safety is managed in the UK.

Other legislation - including that on lifting equipment and work equipment provision - makes the specific requirement to reduce risks to ALARP. ALARP is more widely used than SFAIRP; the Health and Safety Executive (HSE) sees SFAIRP and ALARP requirements as equal.

The definition of "reasonably practicable" comes from the 1949 Court of Appeal judgement in the case Edwards v. National Coal Board: "'Reasonably practicable' is a narrower term than 'physically possible' -¦ the quantum of risk is placed on one scale and the sacrifice involved in the measures necessary for averting the risk (whether in money, time or trouble) is placed in the other, and that, if it be shown that there is a gross disproportion between them -- the risk being insignificant in relation to the sacrifice -- the defendants discharge the onus on them."

ALARP does not mean an individual can decide it takes too much time to don personal protective equipment (PPE) to carry out a task, or that it is too much effort to go the long way around the loading bay to avoid traffic. Where an employer sets a safe system of work based on a risk assessment, the employee must follow it. What is more contentious is how organisations determine ALARP.

ALARP does not mean that an individual can decide it takes too much time to don personal protective equipment.

In his 2011 regulatory review Reclaiming Health and Safety for All, Ragnar LÃ¶ftstedt noted that respondents had "overwhelmingly" supported the reasonably practicable qualification in health and safety legislation because it allows risks to be managed in a proportionate way, but that there was "general confusion" over what it meant in practice.

The 2008 House of Lords ruling on the R v Chargot case made one thing clear: when someone is hurt, the onus is on the dutyholder (usually the employer) to prove they met the ALARP requirement, and not on the prosecution to prove they didn't, so whatever you do has to be well considered and well documented.

Things have not always gone smoothly for ALARP. Article 5(1) of the European Framework Directive on Safety and Health at Work states: "The employer shall have a duty to ensure the safety and health of workers in every aspect related to the work". 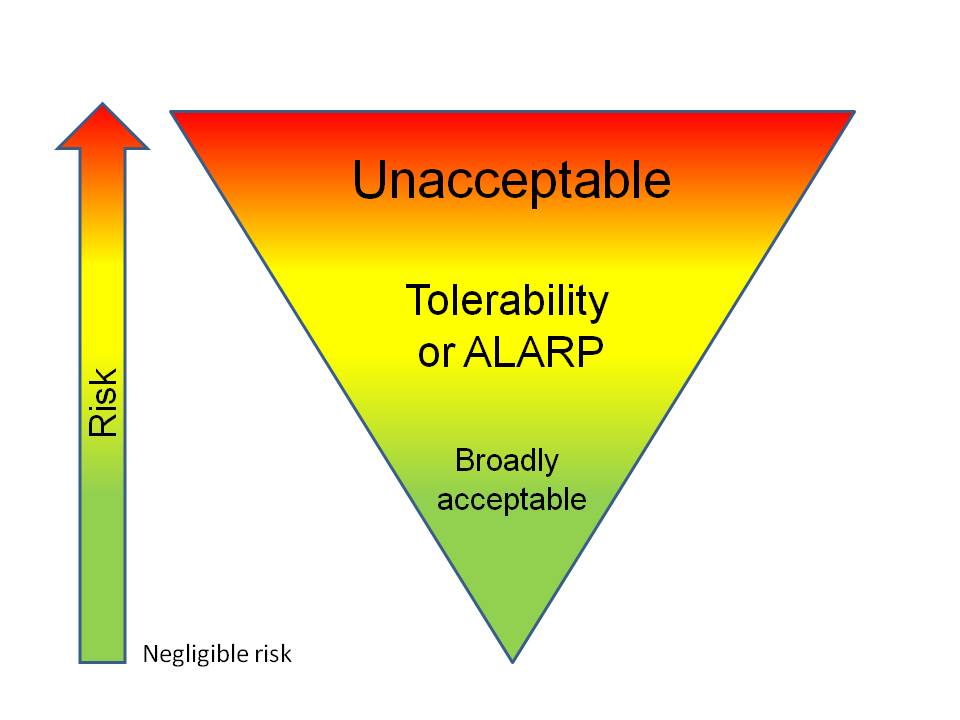 The European Commission made the case to the European Court of Justice (ECJ) that this should mean employers retain responsibility for any accident in the workplace, even where it is not reasonably practicable to prevent it. The UK argued that since the employer has to prove the "reasonably practicable" argument, and since the UK had a better workplace accident record than most EU countries, the use of the phrase was not contrary to the Directive.

The ECJ agreed with the UK. Bill Callaghan, then chair of the Health and Safety Commission was relieved: "The right way forward is a proportionate and risk-based approach protecting employees and others effectively, whilst allowing commonsense to be applied when deciding on what protective measures to adopt."

ALARP decisions can be clarified by placing the risk in a triangle graphic. If your risks are in the red "unacceptable" zone and you cannot afford to make things safer, you have to get out of that business -- it's unacceptable to put children at risk by running a school coach service without seat belts because you can't afford to upgrade your coaches, for example.

If you are in the green area, and you are already applying best practice, if something new comes along to make things even safer you don't have to upgrade. An example might be that a well-financed, larger competitor starts using the latest global positioning technology to track their mobile workers, the law doesn't require you to follow suit.

In the middle, where risks are "tolerable" but not trivial, you can decide if the cost of a new control outweighs its protective benefit. But remember "gross disproportion" in the 1949 judgement? In determining what is ALARP, health and safety has more weight than financial costs or inconvenience.

For example, using the Department for Transport value of a prevented fatality of £1.7 million, if you calculated it would cost you £2 million to prevent one fatality, and therefore you did not spend the money, the courts could well decide that 1:1.2 is not a gross disproportion. The onus is on the dutyholder to show that to spend any more money would be grossly disproportionate to the risks involved.